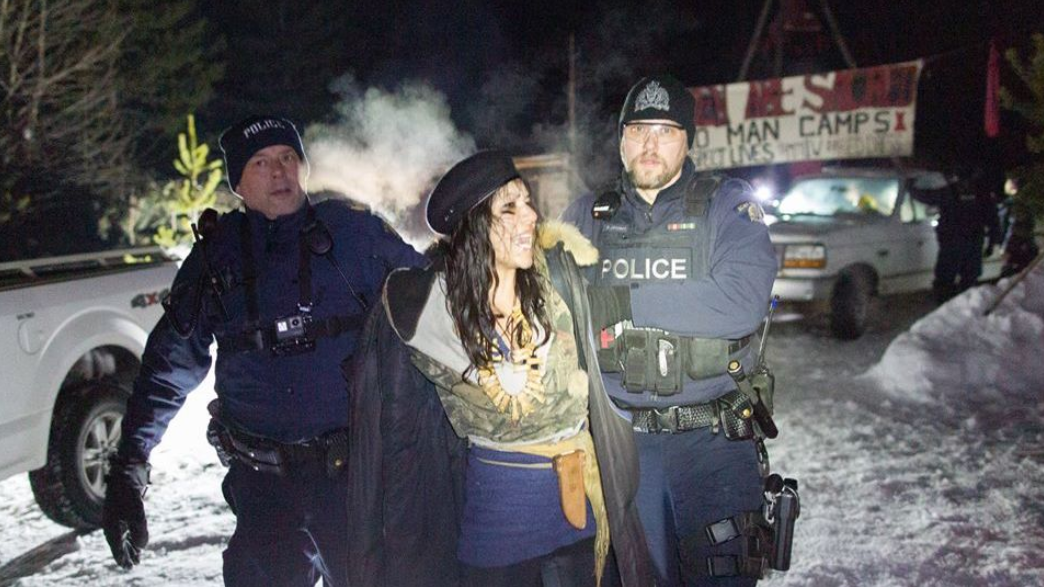 In January, Indigenous land defenders were able to evict both the RCMP and the CGL workers from their land. They were served an eviction notice on January 5 which stated that they cannot return to the territory and resume work until they have the consent of the Wet’suwet’en hereditary chiefs.

Following the eviction, week-long talks were supposed to be held between CGL and the clan leaders. However, the talks broke down after two days, on February 5.

Hereditary chief Na’Moks (also known as John Ridsdale) told Vice, “We always knew that industry was directing government, but this is the first time we’ve ever seen them say it publicly, right there in our meeting minutes.”

The current invasion by the Canadian authorities follows the developments in 2019 when similar raids had been carried out by the RCMP on Wet’suwet’en lands at the behest of CGL.

On December 14, 2018, the British Columbia Supreme Court passed an injunction allowing CGL access to the land belonging to the Wet’suwet’en tribes. The company had been seeking access to the 20 km stretch of pathway through the said land to begin preparatory work for the pipeline. The legal dispute has been going on for over a decade.

CGL claimed that it has signed an agreement with the elected Wet’suwet’en band council. However, the hereditary chiefs, who have significant support from within the tribes, disputed the access and endorsed the protest checkpoints and camps built since 2010.

The raids in 2019 sparked off nation-wide protests. The RCMP had forcibly removed and arrested 14 Indigenous land defenders from the site in a matter of hours in order to let construction crews access the land.

After the serving of the eviction notice on January 5 this year, the Wet’suwet’en leaders issued a press release stating, “The granting of the interlocutory injunction by BC’s Supreme Court has proven to us that Canadian courts will ignore their own rulings and deny our jurisdiction when convenient, and will not protect our territories or our rights as Indigenous peoples.”

“We do this for our kids, our grandkids. We don’t have much left, they took all our land already,” said Chief Howilhkat of the Unist’ot’en camp (also known as Freda Huson) to a CGL worker while serving the eviction notice. “And my clan has only two territories, this is one of them. We use it culturally, we hunt, we do our medicines, we pick our berries, we teach our kids.”

The Wet’suwet’en also described how the excessive force being used by RCMP is beyond the limits of the injunction, “These violations were committed by the RCMP on behalf of Coastal GasLink’s (TC Energy) interlocutory injunction and the existence of an ever-expanding and undefined exclusion zone. Coastal GasLink’s injunction does not prohibit travel on the Morice Forest Service Road nor does it prohibit residence at the Unist’ot’en village or any other Wet’suwet’en homesites on our land. … The RCMP has no jurisdiction to enter the Healing Centre without our Free, Prior, and Informed Consent. Even under colonial law, the RCMP cannot enter or search our Healing Centre without a warrant.”

The UN Committee on the Elimination of Racial Discrimination (CERD) has called upon Canada to immediately halt the construction of the pipeline until the Wet’suwet’en people grant their free, prior, and informed consent to the project.

The Wet’suewet’en people have also asserted that until there is formal recognition of the boundaries of their land, and until the Indigenous peoples’ rights over their lands are formalized, they will continue to oppose the project.

“I feel the land and the land is alive, and it’s well. The water is alive, the trees are alive. Everything here is alive. The rocks are alive. And they’re coming to destroy that too and we’re not gonna let them,” said Freda. SOURCE