How Naomi Klein and Avi Lewis are helping AOC reboot US politics. 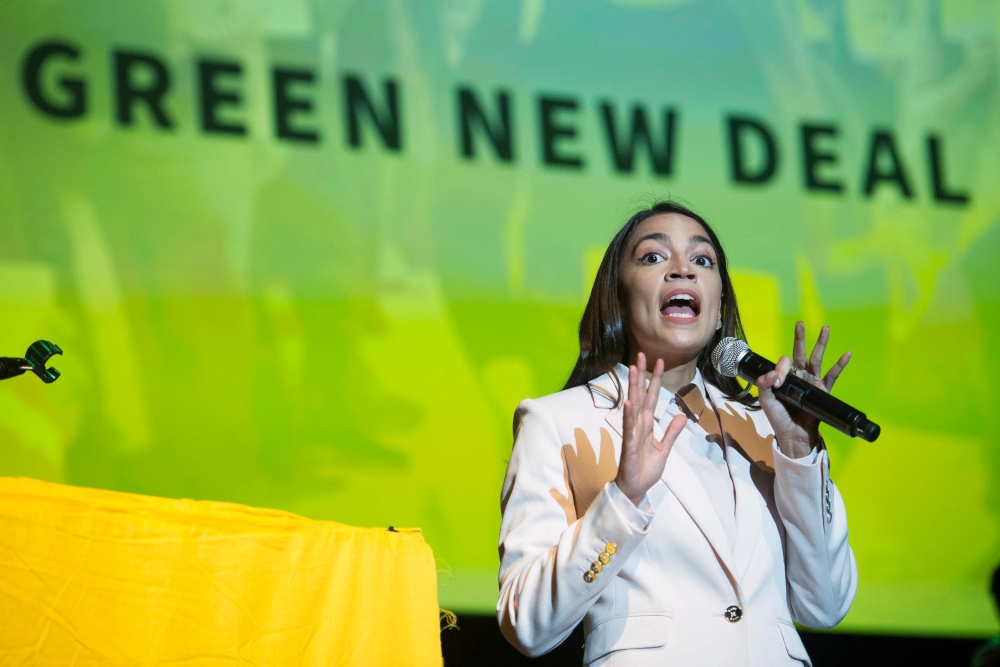 Avi Lewis put the final touches on his script draft, hit send, and waited to find out if he’d be making history with Alexandria Ocasio-Cortez.

Lewis is the filmmaker and former CBC host who has collaborated on documentaries with his spouse Naomi Klein, famously the author of global bestsellers No Logo, The Shock Doctrine and This Changes Everything.

Alexandria Ocasio-Cortez — or AOC as her many supporters call her — broke all the rules when she knocked off a powerful, 10-term Democratic member of Congress by running as a “democratic socialist” to win her Bronx and Queens seat.

At age 29, AOC was the big story on election night in November 2018 and still is, thanks to her deft use of social media and her bold policy proposals, notably the Green New Deal, her resolution to transition the American economy off fossil fuels by 2030 and guarantee a green job to anybody who wants one. When Klein proposed she be central to a short film about what could result, Ocasio-Cortez expressed interest.

Not long after Lewis sent off his try at a script, he received a call from AOC.

“One day my phone rang,” Lewis tells The Tyee, “and it was a Facetime with her communications director and I answered it and all of a sudden I was in her office with her.” The final product, released in April, was a video called A Message from the Future, meant to win public support for a Green New Deal.

Though AOC has been in Congress less than a year, her gigantic social media following helps make her one of Washington’s most influential politicians. These days, during any given news cycle, major Democratic contenders for president say that they support her Green New Deal vision in principle. Prominent Republicans scramble to offer their own plans in response. Global temperature rise, for the first time, is a defining issue of a U.S. presidential election primary.

Less known is how Lewis and Klein contributed to this moment, driven by last October’s dire report from the United Nations, which calculates we must roughly halve global emissions by 2030 to preserve any kind of climate resembling normal. “The stakes are incredibly high,” says Lewis.

Fox News is one media outlet to zero in the Canadian connection — albeit with its own torque. Justin Haskins argues in an opinion piece on Fox’s website that “there is strong evidence to suggest that much of the draft text of Ocasio-Cortez’s Green New Deal is merely a revised version of the ‘Leap Manifesto,’ a socialist green-energy plan pushed by far-left environmentalists in Canada.”

Haskins, who is the executive editor and a research fellow at the Heartland Institute, an Illinois-based think tank that questions whether humans are causing climate change, is not totally out to lunch. His piece fails to mention that the term “Green New Deal” was first used by Thomas Friedman in 2007; that the idea of a Second World War-style mobilization to fight climate change was described as early as 2009 by Bolivia’s Angelica Navarro Llanos in a speech to the United Nations; or that the movement for a Green New Deal properly began when young activists with the U.S.-based Sunrise Movement occupied Nancy Pelosi’s office after the 2018 U.S. midterms.

But Haskins is correct that several of the Canadian thinkers responsible for the Leap Manifesto, a 2015 plan to completely shift Canada away from fossil fuels by 2050, are now playing pivotal roles in shaping and promoting the U.S. Green New Deal. First and foremost: Naomi Klein and Avi Lewis.

The Canadian power couple have “been pushing far-left environmental policies in the United States for quite some time,” the Fox News contributor wrote in an email to The Tyee. “Although Lewis, Klein, Bill McKibben and others aren’t household names, they are incredibly influential in eco-socialist circles, and it appears that their fame and influence are growing in the United States in the wake of the rise of politicians like Bernie Sanders and Alexandria Ocasio-Cortez.”

The clearest example of Lewis and Klein’s impact on the U.S. climate debate is A Message from the Future, which quickly went viral. In it, Ocasio-Cortez describes what U.S. society could be like if the ambitions of the Green New Deal were ever fully realized. The idea for the video came out of a conversation last December between Klein and Molly Crabapple, an illustrator, writer and filmmaker.

“The question was: How do we tell the story of something that hasn’t happened yet?” Klein recounted on the Intercept, where she is a columnist. “We realized that the biggest obstacle to the kind of transformative change the Green New Deal envisions is overcoming the skepticism that humanity could ever pull off something at this scale and speed.”

She and Crabapple discussed creating a short film that could “help win the battle for hearts and minds that will determine whether [the Green New Deal] has a fighting chance in the first place.”

Around that time the Intercept ran a widely-read piece by journalist Kate Aronoff describing in vaguely utopian prose the life of a young woman named Gena in the hypothetical Green New Deal world of the year 2043.

“Crabapple and I decided that the film could do something similar to Aronoff’s piece, but this time from Ocasio-Cortez’s vantage point,” Klein wrote. “It would show the world after the Green New Deal she was championing had become a reality.”

The Intercept said it would produce the film. Ocasio-Cortez agreed to narrate. And Lewis was brought on to write the script with AOC. To Lewis it was an exciting and daunting opportunity. “My co-writer was literally one of the most famous people in the political world,” he told The Tyee.

The goal was to have the film done for April, so that it could debut in Boston for the first stop of a U.S. tour promoting the Green New Deal that was being planned by the Sunrise Movement. Taking a cue from Aronoff’s Intercept piece, Lewis focused his first draft mainly on the generous social programs and environmental progress that Americans in the future might see under a Green New Deal. “It was a totally different creative muscle than I’ve ever exercised,” he says.

Lewis sent the draft off to Ocasio-Cortez. Then came the Facetime phone call. She liked the draft but thought it needed work. “‘We have to do not just the vision of the future,’” Lewis recalls her saying. “‘We have to do the past, how we got here, the present, the fork in the road, the deciding point that we’re in now.’”

A few weeks later her communications director texted Lewis a photo — it was a printout of his script with Ocasio-Cortez’s comments in handwriting. “Over the next couple months I got like line-by-line edits from her as photographs,” he said.

The hard work seemed to pay off. “By the time I met her in Washington, D.C., at the Intercept’s studio, it was her words,” Lewis said. “I was really pleased when we recorded the narration. She was able to locate a more internal and reflective tone.”

This was crucial for the narrative of the film, Lewis explained, “because the whole thing really does take place in her head.”

The video debuted on the Intercept on April 17. That morning, Ocasio-Cortez shared A Message from the Future on her Twitter account. “Climate change is here + we’ve got a deadline: 12 years left to cut emissions in half. A #GreenNewDeal is our plan for a world and a future worth fighting for. How did we get here? What is at stake? And where are we going? Please watch & share widely,” she wrote.

The post now has more than 96,000 likes and the video has been viewed 6.7 million times.

With those views came national media coverage. “AOC sends a stark climate message from the future,” reported Mashable. TeenVogue described it as a “powerful video offering a vision of a Green New Deal future.” Outlets like the Washington Post, Fox News, Huffington Post, the Hill and the Washington Examiner offered takes. Slate reached out to futurist Amy Webb to dissect it.

Meanwhile the Sunrise Movement took it on the road during an eight-city tour attempting to make the Green New Deal a top priority in the 2020 election. “At most of the tour stops across the country we were showing the video,” said Stephen O’Hanlon, a Sunrise spokesperson. At the final sold-out tour stop in Washington, D.C., 1,500 people squeezed into the Cramton Auditorium at Howard University.

Among the speakers that night were Ocasio-Cortez, Democratic senator Ed Markey and Bernie Sanders. Klein also spoke. Varshini Prakash, the executive director of the Sunrise Movement, introduced the Canadian author as “a personal hero of mine.”

Klein told the crowd, “We have all been raised in a culture bombarded with messages that there is no alternative to the crappy reality we have today.” She added, “If we’re going to win a Green New Deal we’re going to have to start telling different stories about who we are and about the kinds of futures that are within our grasp.”

For years, right-wing politicians in Canada and their fossil fuel industry backers have been obsessed with the fact that some environmental groups have received a portion of their funding from U.S. sources. Fox news contributor Haskins frets about the “grave threat” that “radical environmentalism” poses “to individual liberty.”

Lewis argues that the true threat to our freedom is an economic system that’s destabilizing the foundation for all life on Earth. “I think we’re all carrying a huge amount of climate grief and fear about what we know we’re doing to our only home.”

Some viewers of A Message from the Future told Lewis they cried while watching the video. “It’s just so interesting psychologically and such an important clue for activists that hearing more bad news and watching walruses hurl themselves off cliffs on Netflix — that somehow doesn’t move us the same way as letting ourselves actually having a brief flicker of hope that we could do something about it,” he says. “That seems to open the floodgates of our repressed grief and emotion.”

Lewis marvels at the speed of the political changes he’s witnessed and participated in over the past several months. The Overton window is the name given to the range of views taken seriously in public discussion. When it comes to climate change solutions, Lewis says, “I’ve been thinking that the Overton window hasn’t been cracked open, it’s been knocked off its freaking hinges, in terms of permissible political speech.” He pauses and adds, “Of course, turning this stuff into concrete action is the epic work of many lifetimes.”

We don’t have lifetimes. If we’re not able to achieve the unprecedented emissions cuts called for by the United Nations, we could be locking ourselves into global catastrophe — the implications of failing are unthinkable. You don’t have to tell Avi Lewis. “It’s got to happen,” he says, “in 10 years.”  SOURCE