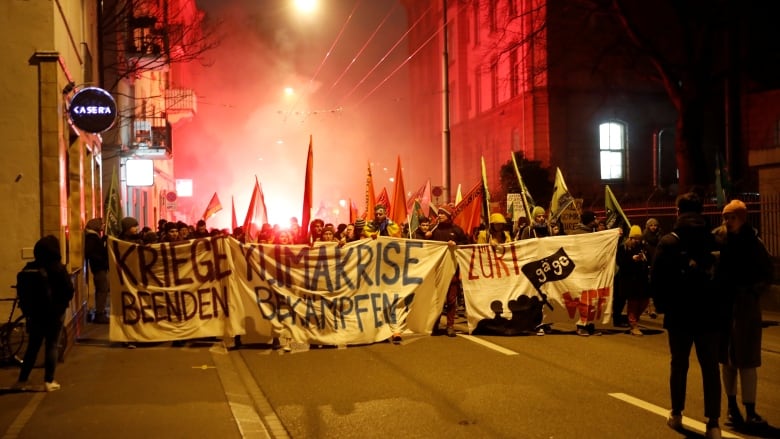 The world’s rich must beware of the pitchforks, says a letter released in Davos yesterday where demonstrators protested against the 50th World Economic Forum annual meeting. (Arnd Wiegmann/Reuters)

A group of rich people from the United States want governments to raise their taxes.

Yesterday, Patriotic Millionaires, the exclusive U.S. club that also includes billionaires, released a letter at the World Economic Forum in Davos, Switzerland, demanding that the global rich add their names to a new plan to make the world a better place through global tax reform.

If you own a house in Vancouver or Toronto and are considering signing on — you may not be rich enough. Membership requires a minimum annual income of a million U.S. dollars or assets of five million.

So far, there is no indication that the world’s rich are lining up to follow the group’s prescription for a crackdown on tax havens and tax avoidance through reforms to international laws.

The membership list so far includes 121 wealthy people, but since the U.S. alone has something in the order of 600 billionaires, current signatories are dwarfed by many more who aren’t interested in joining.

At one of the most obnoxious displays of privilege that is found on the world stage, we’re proud to release ‘Millionaires Against Pitchforks’#WEF20#TaxTheRichhttps://www.millionairesagainstpitchforks.com/

The Davos letter addressed to “Our Fellow Millionaires and Billionaires Across the Globe,” appears to be just the latest move to draw media attention to the idea that at least some of the world’s richest people think the growing gap between rich and poor is a problem. The PR move, however, has not garnered much coverage in the world’s billionaire-owned media.
Though it may seem like a lot to a working stiff, $5 million in assets is not extraordinary in a world so starkly divided between rich and poor. There are many such rich people, including among our elected officials, who might not want to sign on but would still agree with many of the ideas expressed in yesterday’s letter. 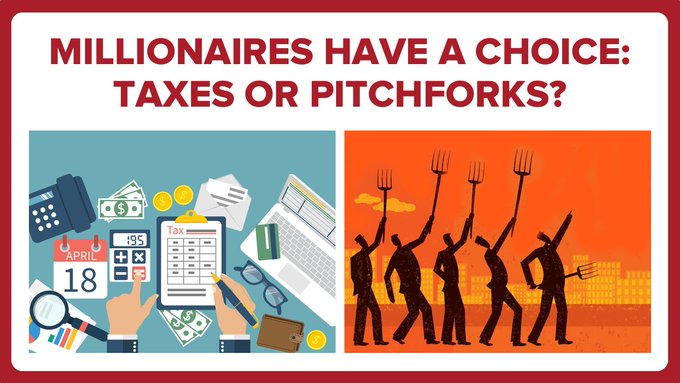 is growing across the globe,” says the letter released in Davos. “Despite vocal protests to the contrary, most reasonable people understand that philanthropy has always been, and always will be, an inadequate substitute for government investment.”

The statement seemed to echo an appeal by academic and author Rutger Bregman, a speaker at last year’s Davos meeting, who went rogue and declared that talking about poverty without mentioning taxes was like a going to a firefighter’s meeting where they refused to talk about water. He wasn’t invited back.

Like Bregman, signatories to the new letter say extreme inequality is driving the world toward a crisis point. In fact, they warn the rich of a potential uprising by the poorer classes. The threat of revolution, they warn, creates a tradeoff between “those who prefer taxes and those who prefer pitchforks.” 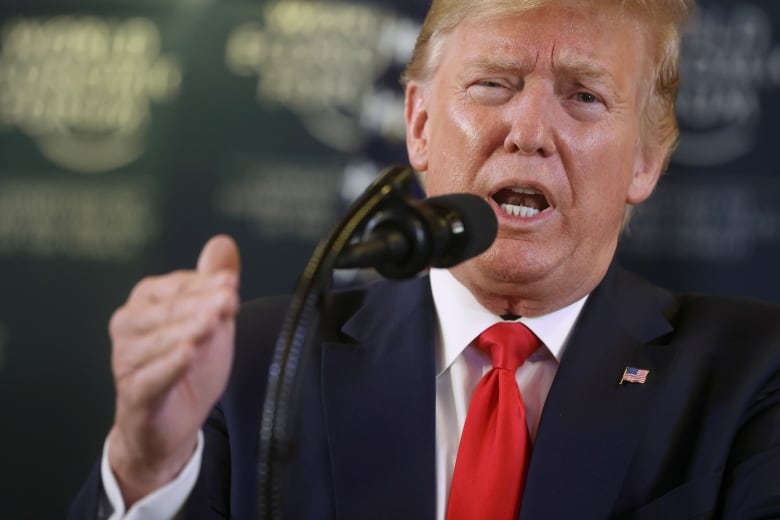 U.S. President Donald Trump spoke at this year’s World Economic Forum. Many of his wealthy donors welcomed his tax cuts that helped the rich get richer. (Jonathan Ernst/Reuters)

As the shortage of signatures on the document may show, if a popular uprising to overthrow the rich is brewing, elites believe they can handle  it.

All around the world, including in Canada, Britain and the United States, political parties that favour tax cuts and leaving tax havens alone get the vast majority of financial support from donors.

Rather than sign documents to raise their taxes, even the moderately rich often vote with their wallets to make sure taxes stay low.

Those donations, often used for campaign advertising, represent money well spent. In the United States, the populist Trump garners support from many poor voters who believe they are opposing government elites; many of the less well off seem willing to vote against their own best interests.

In the U.S., lower middle class and poor Trump supporters effectively voted against their own medical coverage.

In Canada, there are cases where people earning basic income voted for the party that promised to cancel it and where people violently opposed inheritance taxes, even though they would be far too poor to be affected.
Opponents of pro-tax campaigns often suggest that those who want to pay higher taxes should do so, but of course that would just make the shirkers richer in relative terms.

Yesterday’s letter is unlikely to be more successful than previous campaigns, including a 2019 effort by the self-described Patriotic Millionaires to persuade government to raise taxes on the rich in New York.

Waiting for the pitchforks

At that time, Patriotic Millionaire member Abagail Disney, heir to part of the Disney fortune and a well known advocate of progressive causes, was backing the tax increase.

“New York will always be New York,” she said. “There’s no other place like it, and millionaires are concentrated here because of that.”

New York Gov. Andrew Cuomo, a Democrat whose state budget faced a deficit, threatened to move himself to Florida if the tax hike was introduced — and the campaign appeared to fizzle out.

Polls of people across the global wealth spectrum, including U.S. viewers of Fox Television, have shown a majority would like to see higher taxes on the rich. Many of the world’s richest people, including Microsoft founder Bill Gates and financier Warren Buffet, have complained that the tax system is unfair.

But until people are willing to elect governments that promise to raise taxes, changes are unlikely.

Despite a widening gap between the richest and everyone else, there are few signs of people sharpening their pitchforks.  SOURCE

Fighting the corporate tax tricks that lead to inequality