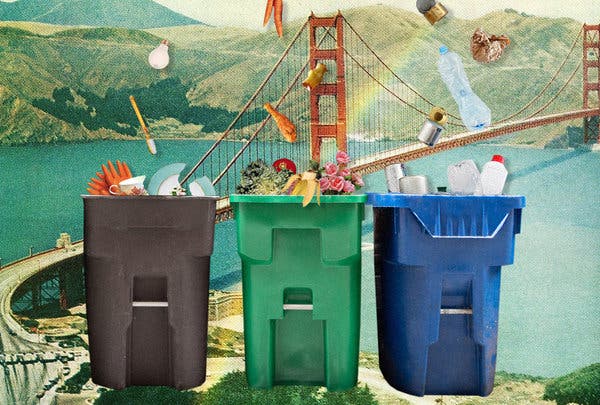 Recycling in the United States [and Canada] is broken.

For years, we relied heavily on recycling operations in China to take our waste. But that came to an end in 2018, when Beijing barred the import of recycling materials. The result is a waste crisis that has caused at least dozens of municipalities to cancel curbside recycling programs, with many more implementing partial cuts. Huge amounts of recyclables are now going to landfills.

“When the biggest export market is no longer willing to accept your material, there’s an imbalance between supply and demand,” said David Biderman, the executive director of the Solid Waste Association of North America. “That’s just Economics 101.”

So, how can we fix the system?

Experts say that we would need to implement changes across the board. Legislators may need to pass laws requiring manufacturers to use more recyclable materials, companies would need to build much-needed recycling infrastructure and people would need to recycle properly.

Cities can’t do all that. But they can play an important role.

For a possible model, consider San Francisco, which runs one of the most successful waste-management programs in the United States. Through recycling and composting, the city manages to keep around 80 percent of its waste out of landfills.

That’s much higher than the American average. In 2017, the year before the Chinese ban, American cities were recycling and composting about 35 percent of their waste. Europeans do a bit better, keeping almost half of their municipal trash out of landfills on average.

San Francisco’s program has been years in the making. In 2000, it introduced the “fantastic three” citywide curbside collection program with separate, color-coded bins for recyclables, compost and trash. In 2009, it passed a law requiring residents and businesses to separate their waste.

City inspectors monitor bins to ensure that residents sort their waste correctly and leave tags if materials are found in the wrong bin. They can impose fines if they find repeat offenders.

Other policies include bans on hard-to-recycle items including single-use plastic bags and polystyrene packaging and an ordinance requiring food vendors to use compostable or recyclable food containers.
San Francisco’s system is built on a highly unusual partnership with a single waste company. That company, Recology, has had a monopoly on handling San Francisco’s waste for almost 90 years. That no-bid, no-franchise-fee concession has come under harsh criticism over the years.

Critics say that the city could save tens of millions of dollars if it were to break up Recology’s monopoly and award waste collection and processing contracts separately.

Supporters say, why mess with a system that gets results? Having a monopoly avoids a “race to the bottom,” said Robert Haley, zero-waste manager at the San Francisco Department of the Environment, as companies cut corners to win short-term contracts instead of focusing on broader waste reduction goals.

No matter where you stand on issues like regulation and market competition, the Chinese ban means that the United States recycling system needs an overhaul.

But that might not be as bad as it sounds, Mr. Biderman said.

“The ban is a challenge for recycling programs in the United States,” he said. “But it also creates huge opportunities to invest in domestic infrastructure to receive recovered material.” SOURCE