Here’s a five-step plan to deal with the stress and become part of the solution. 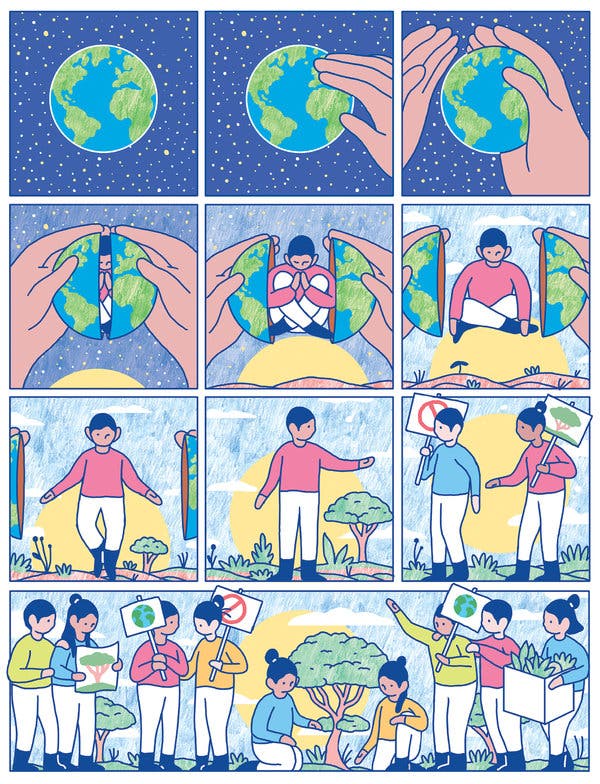 You are scrolling through the news and see yet another story about climate change.

Australia is on fire. Indonesia is drowning. At the same time, Donald Trump is trying to make it easier to build new fossil-fuel projects.

As you read, your chest tightens and a sense of dread washes over you, radiating out from your heart. You feel anxious, afraid and intensely guilty. Just this morning, you drove a gasoline-powered car to work. You ate beef for lunch. You booked a flight, turned on the heat, forgot your reusable grocery bags at home. This is your fault.

The first step is the key to all the rest. Yes, our daily lives are undoubtedly contributing to climate change. But that’s because the rich and powerful have constructed systems that make it nearly impossible to live lightly on the earth. Our economic systems require most adults to work, and many of us must commute to work in or to cities intentionally designed to favor the automobile. Unsustainable food, clothes and other goods remain cheaper than sustainable alternatives.

And yet we blame ourselves for not being green enough. As the climate essayist Mary Annaïse Heglar writes, “The belief that this enormous, existential problem could have been fixed if all of us had just tweaked our consumptive habits is not only preposterous; it’s dangerous.” It turns eco-saints against eco-sinners, who are really just fellow victims. It misleads us into thinking that we have agency only by dint of our consumption habits — that buying correctly is the only way we can fight climate change.

As long as we are competing for the title of “greener than thou,” or are paralyzed by shame, we aren’t fighting the powerful companies and governments that are the real problem. And that’s exactly the way they like it.

Step 2: Focus on systems, not yourself.

Even if we manage to zero-out our own contributions to climate change, it would be practically a full-time job, leaving us little time or energy for pushing for the systemic changes we need. And the avoided emissions would be tiny compared with the scale of the problem. Each person in the United States emitted an average of 16 metric tons of energy-related carbon dioxide in 2018, according to the Energy Information Agency. The entire country emitted 5.28 billion metric tons of energy-related carbon dioxide that year.

I have chosen to fight against a proposed gas pipeline, liquefaction facility and liquefied natural gas export terminal that the Canadian company Pembina wants to build in Oregon, where I live. If built, the project would result in emissions of over 36.8 million metric tons of carbon dioxide equivalent per year. Some 42,000 people submitted comments to a state agency asking it to deny permits for the project. If we manage to stop construction, each of those people could claim credit for preventing one forty-two-thousandth of those emissions — some 876 metric tons per person! It would take 54 years of individual zero-carbon living to make the same dent.

These sweeping, systemic changes are complicated and will be hard won. No single person alone can make them happen. Luckily, there are already dozens, if not hundreds, of groups dedicated to climate activism. Some are local and focused on stopping particular fossil-fuel projects, like Rogue Climate in Southern Oregon, with which I am working. Others are national and focused on changing federal policy, like Zero Hour and the Sunrise Movement. Still others, like Greta Thunberg’s Fridays for Future, are international and focused on putting moral pressure on climate negotiators and governments around the world. Groups like Project Drawdown research the nuts and bolts of decarbonizing the world. Climate change is linked to income inequality and injustice, so if your passion is fighting for racial justice, the rights of the poor, or indigenous rights and sovereignty, that works, too. Or you might volunteer for a climate-focused local or national political candidate.

The power of these groups is not simply strength in numbers. They work well because they divide up the work that needs to be done and give each task to those best suited to it. This also makes the fight less daunting. Instead of trying to become an expert in international regulatory law, global supply chains, atmospheric science and the art of protest, you can offer the skills and resources you already have, and trust that other people with complementary skills are doing what they can do, too. If you are a writer, you can write letters to the editor, newsletters and fliers. If you are strong, you can lift boxes. If you are rich, you can donate money. Only you know what and how much you can reasonably do. Take care not to overdo it at first and risk burning out. Set a sustainable level of involvement for yourself and keep it up. As a bonus, working with a group will increase the richness and diversity of your personal relationships, and may well temper your climate anxiety and depression.

As we fight, it is important for our mental health and motivation to have an image in mind of our goal: a realistically good future.

Imagine dense but livable cities veined with public transit and leafy parks, infrastructure humming away to remove carbon dioxide from the atmosphere, fake meat that tastes better than the real thing, species recovering and rewilding the world, the rivers silver with fish, the skies musical with flocking birds.

This is a future where the economic inequality, racism and colonialism that made decades of inaction on climate change possible has been acknowledged and is being addressed. It is a time of healing. Many ecosystems have changed, but natural resilience and thoughtful human assistance is preventing most species from going extinct. This is a future in which children don’t need to take to the streets in protest and alarm, because their parents and grandparents took action. Instead, they are climbing trees.

This future is still possible. But it will only come to pass if we shed our shame, stop focusing on ourselves, join together and demand it. SOURCE