ANCOUVER — Hundreds of people marched from BC Supreme Court to Victory Square Saturday to voice their support for opponents of a natural gas pipeline project.

The company posted an injunction order Tuesday, giving people at a protest camp near Houston 72 hours to make way for construction workers.

“I’m here as an indigenous youth standing with Wet’suwet’en Nation in their resistance to Coastal Gaslink pipeline and colonial forces that seek to remove indigenous people from our lands and our futures,” said Ta’Kaiya Blaney as she addressed the crowd at Victory Square. 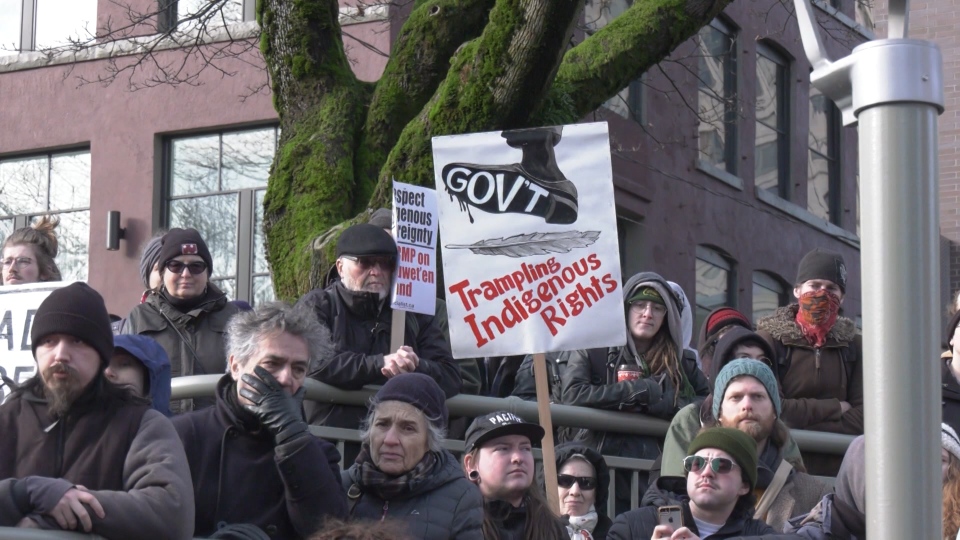 Hundreds of people marched from BC Supreme Court to Victory Square Saturday to voice their support for opponents of a natural gas pipeline project. (CTV)

Coastal GasLink has agreements with 20 elected First Nation councils along the pipeline’s 670-kilometre route, but not the support of hereditary chiefs.

“It’s really quite simple. Elected band councils have jurisdiction and authority to the reserve land system. Period,” said Grand Chief Stewart Phillip of the BC Union of Indian Chiefs. “The hereditary chiefs have authority over the territory – the broad territory.”

This week, the UN Committee for the Elimination of Racial Discrimination urged a halt to the project, saying it does not respect the rights of indigenous people. That prompted a response from B.C.’s Human Rights Commissioner.

“We have obligations to ensure free, prior, and informed consent exists for all impacted Indigenous groups before projects impact lands,” said Commissioner Kasari Govender in a statement in support of the pipeline’s opponents.

Environmentalist David Suzuki made some remarks at the Saturday rally, but it was young indigenous voices that spoke the loudest.

“Standing with Wet’suwet’en land defenders and supporters means that I am standing with my future,” said Blaney.

With Coastal GasLink’s 72-hour injunction notice now expired, people at Saturday’s march and rally feared the RCMP would move in to arrest protesters at the camp. SOURCE