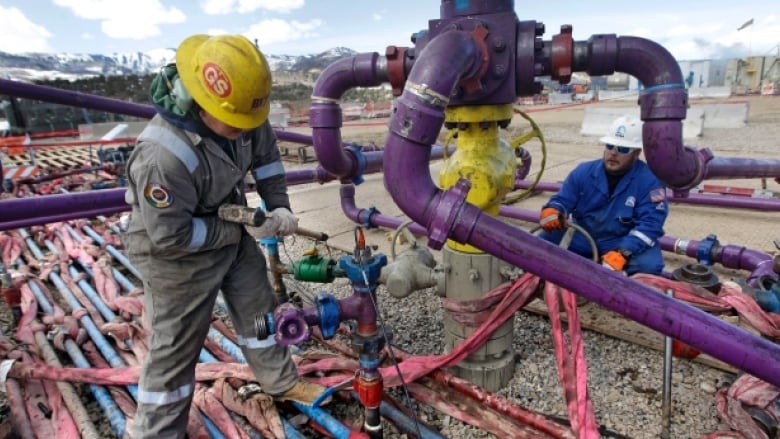 The report about caribou protection was sent anonymously to the Canadian Centre for Policy Alternatives. The audit, conducted in 2014, looked at whether oil and gas companies near Fort Nelson were following provincials rules put in place to protect declining caribou herds. (Brennan Linsley/The Associated Press)

VICTORIA — A leaked audit of oil and gas practices in northeastern British Columbia suggests rules to reduce the impact of industry on caribou habitat are being routinely ignored.

“The audit identified a number of issues with the (interim operating procedures) and a trend of non-compliance with the measures contained within it,” says the 2014 audit conducted for the B.C. Oil and Gas Commission.

The audit was never released and only came to light after it was leaked to Ben Parfitt, an energy researcher with the left-leaning Canadian Centre for Policy Alternatives think tank.

The information’s release comes as the province continues its fight against the proposed Trans Mountain pipeline expansion from Alberta on environmental grounds.

“I think there’s a great deal of inconsistency here,” Parfitt said Monday. “There is real ongoing ecological damage being done in the northeast, and the province, so far, has failed to do anything about that.”

The audit examined dozens of wells, pipelines, roads and seismic lines in the Montney area around Fort Nelson. It used aerial surveys and on-site visits to find out how closely energy companies were following guidelines developed by the province and the Canadian Association of Petroleum Producers for development on caribou habitat.

The guidelines are part of the province’s caribou recovery plan for what is considered a species of special concern. They govern the size of well pads, width of roads, seismic lines, sight lines for predators and treatment of shores and banks.

A commission spokesman said the audit wasn’t released because it was undertaken before some of the new rules were brought in. Phil Rygg said it also didn’t distinguish between the size of multi-well pads and single-well pads, although the document clearly addresses that issue.

Almost $8 million has been invested in caribou research over the last four years, he added.

The audit said it was limited by its short time span and weather conditions. Performance also varied in different areas and between different companies, it noted.

But, overall, the audit found none of the pipelines or roads and 38 per cent of well sites followed guidelines.

Well pads routinely exceeded the two-hectare limit. Although the auditors were told those pads were for multiple wells, few had more than two wells and those were often suspended.

Pits were often dug immediately adjacent to the pads, making them as large as seven hectares. The auditors found little evidence of interim remediation at the sites.

While seismic lines were conforming to the rules, roads and pipelines were built side by side, which created long, straight lines through the forest up to 80 metres wide. Developments ran right up to water bodies with no buffer zones.

The audit also found the rules had no way of measuring or limiting development’s cumulative effects.

“Not only was compliance low in general, but often these measures were not prescriptive enough, allowing companies to avoid them or seek exemptions from them,” the audit said. “Long-term cumulative effects are not addressed and cannot be addressed as the current (regulation) is laid out.”

Parfitt pointed out the audit isn’t the first document to raise questions about B.C.’s environmental sincerity.

He said his research has found 92 unlicensed dams operating in the area to store water for fracking. Some are as tall as seven storeys. In another case, a report on how drilling and fracking for natural gas was contaminating groundwater near well sites was posted on the commission’s website the day after a reporter with a leaked copy started asking about it.

“This is the third instance where information has come to light where it appears rules were being broken and not much was being done about it,” Parfitt said.

“We have a government here that is making an awful lot of noise about the environmental impact of a proposed pipeline. Meanwhile, ongoing significant ecological damage is occurring and we have a government that is encouraging even more of that activity.” SOURCE