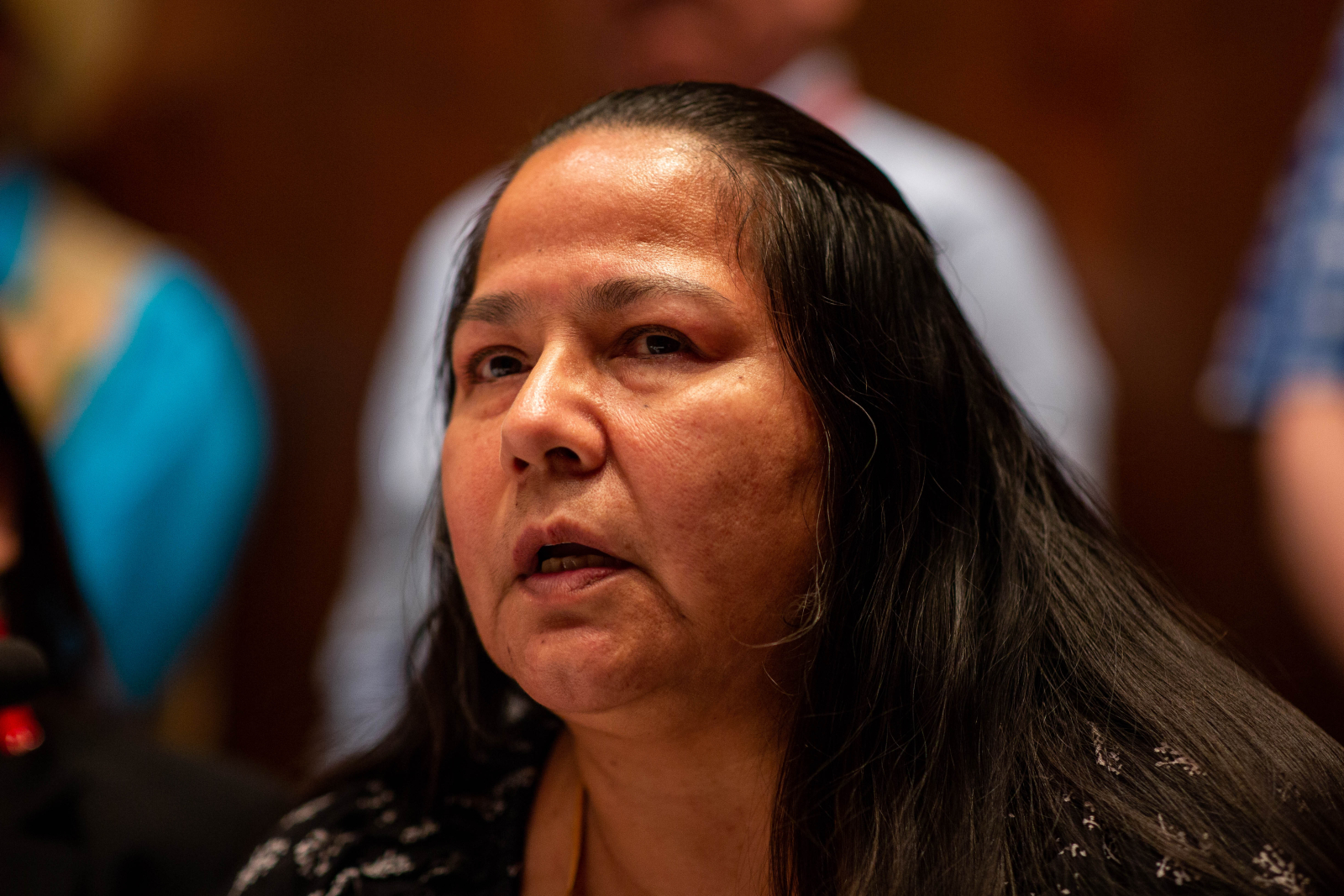 Kukpi7 Judy Wilson, secretary-treasurer of the Union of British Columbia Indian Chiefs, told National Observer that she felt Alberta Energy Minister Sonya Savage was misguided when she slammed a UN directive calling on Canada to halt construction on energy projects.

“I think that she doesn’t understand what the proper title-holders are,” Wilson said. “I think she needs to be more educated on that.”

The UN directive calls on Canada to stop construction on the Trans Mountain pipeline expansion project, the Site C dam and the Coastal GasLink pipeline until the government can properly carry out its constitutional duty to consult and obtain free, prior and informed consent from Indigenous people.

The UN Committee on the Elimination of Racial Discrimination said it was concerned large projects in Canada could cause “irreparable harm to Indigenous peoples rights, culture, lands, territories and way of life.” It also said it was disturbed by law enforcement’s “harassment and intimidation” and alarmed by the “escalating threat of violence.”

After news broke Tuesday of the December directive from the UN, Savage issued a statement criticizing the international body as “unaccountable” and “unelected” and suggesting it was “beyond rich” that its work would “single out Canada.”

“We wish that the UN would pay as much attention to the majority of First Nation groups that support important projects such as Trans Mountain and Coastal GasLink,” Savage wrote.

“First Nations leaders increasingly recognize that responsible natural resource development can serve as a path from poverty to prosperity for their people. Yet this UN body seemingly ignores these voices.”

With all the atrocities in the world, many committed in other oil producing countries, UN efforts would be better directed there than at Canada…

My full statement on the UN Racism Commitee calling for the halt of major resource projects: 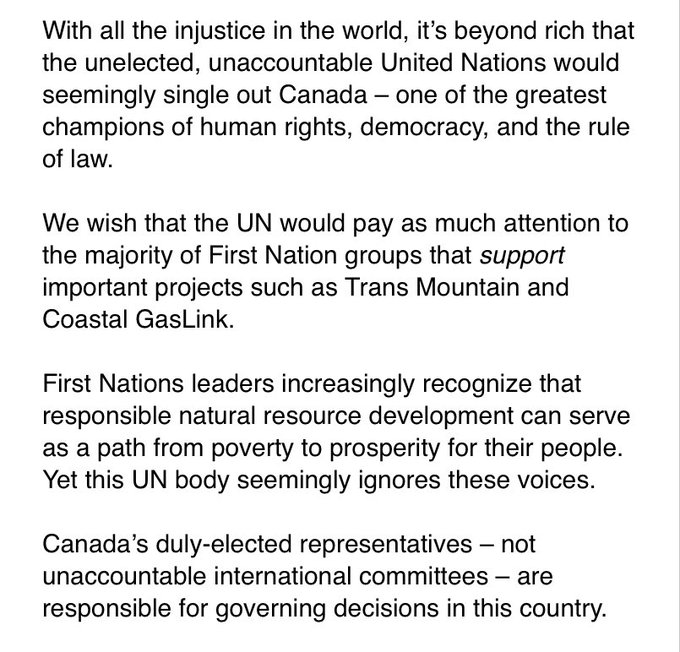 But the issue of which First Nations leaders are speaking is precisely what is at stake, countered Wilson. “Only the proper title-holders of the land have that decision-making authority,” she noted.

In the case of Coastal GasLink, the proper title-holders are hereditary, Wilson said. While the company has indicated it has signed agreements with all elected First Nations councils, five Wet’suwet’en hereditary chiefs are demanding the province suspend permits for the pipeline.

The hereditary chiefs have cited Wet’suwet’en trespass laws when they sent an eviction notice recently to the company. Hereditary chief Na’moks even cited the UN directive in comments: “The world is watching; the United Nations is watching. This is not just the Wet’suwet’en,” said Na’moks, according to CBC News.

Alberta NDP energy critic Irfan Sabir said in a statement that “we believe the economy, environment, and Indigenous rights can, and must, go hand-in-hand.” The former Alberta NDP government led an anti-racism initiative and formed the Indigenous Climate Leadership Initiative, he noted.

“As a result, we were able to move much needed resource development forward in a responsible manner,” said Sabir. “The current UCP government’s dismissive attitude towards the environment, refusal to respect Indigenous rights, and lack of vision will only lead to further delays and more projects being questioned.”

The UN directive is not the first time that the organization has cast a critical eye on Canada’s relationship with Indigenous people and its pursuit of fossil fuel and energy projects, in the context of discrimination.

In June 2019, Baskut Tuncak, the UN’s special rapporteur on human rights and hazardous substances and wastes, concluded that Indigenous communities in Canada are “disproportionately impacted” by toxic industrial byproducts to the point that it raised questions of discrimination.

In addition to its warning about resource projects, the new UN directive recommends Canada “establish, in consultation with Indigenous peoples, a legal and institutional framework to ensure adequate consultation” and to incorporate free, prior and informed consent into domestic legislation.

In British Columbia, the province passed legislation in November to implement the UN Declaration on the Rights of Indigenous Peoples. It has not yet been passed federally.

“Canada needs to heed these international bodies, international law, and they keep talking about upholding the rule of law, but Canada isn’t doing that as a country,” Wilson said.

“The rule of law is very clear with regards to discrimination, we should be moving as a country past that. We should be working on a better direction, instead of reinforcing the old fossil fuel and oil industry. We’re wasting a lot of time because of climate change.” SOURCE