Conservation efforts targeting most vulnerable birds cut extinction rate by 40%, according to scientists 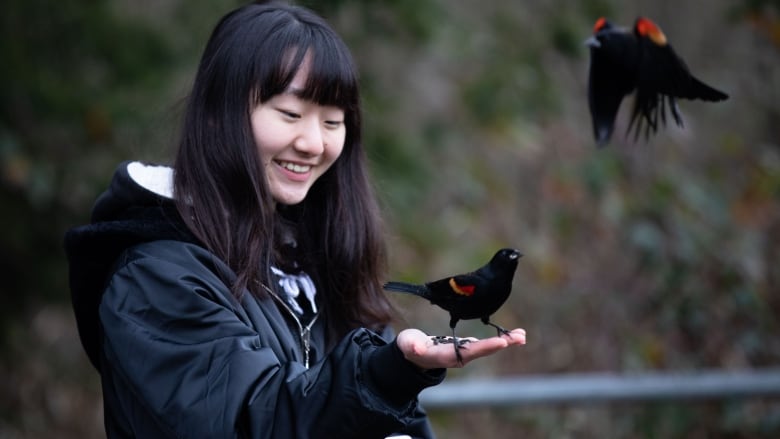 A red-winged blackbird lands on the outstretched hand of 16-year-old Ayu Ito at the Reifel Bird Sanctuary in Delta, B.C. (Maggie MacPherson/CBC)

Bird species may be going extinct up to six times faster than previously thought, but the numbers would be much worse without conservation efforts over the last three decades, according to new research from a B.C. scientist.

The study suggests conservation projects targeting critically endangered species have reduced the rate of bird extinctions by about 40 per cent over the last 28 years.

“When we care about a species, we can invest a lot, but the problem is that a lot of species are slowly deteriorating in front of us, and we’re not taking notice,” Simon Fraser University biology professor Arne Mooers told CBC.

Mooers was part of an international team that conducted the study, published this month in the journal Biology Letters.

The researchers used the IUCN Red List of Threatened Species, a global inventory of biodiversity, to trace the status of each of the approximately 10,000 known bird species over the last 28 years.

They found a risk of extinction that’s about six times higher than previous estimates, which were based on simple counts of species that have been lost.

Humans are the biggest problem facing the world’s birds, according to Mooers.

“It’s mostly habitat loss,” he said. “For instance, in Canada a lot of the species that live on the Prairies aren’t doing very well because all of the Prairies have been turned into agriculture where they can’t raise babies.”

He points out that humans have been successful at bringing species like the whooping crane and peregrine falcon back from the brink of extinction. He believes what’s needed now is action to prevent other species from reaching that point.

“One of the major things we can do is to set aside more land and manage the land in a way that bird species can do well,” Mooers said.