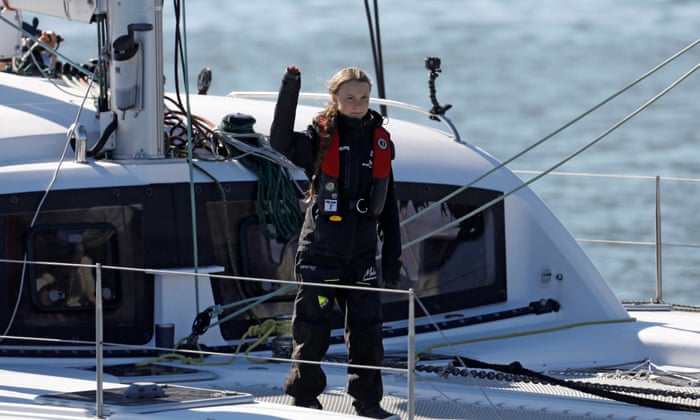 Greta Thunberg arrives in Lisbon on La Vagabonde, which leaves little or no carbon footprint when its sails are up, using solar panels and hydro-generators for electricity. Photograph: Pedro Nunes/Reuters

The climate activist Greta Thunberg has arrived in Lisbon after a three-week catamaran voyage across the Atlantic Ocean from the US.

The Swedish teenager now plans to head to Spain to attend the UN climate conference in Madrid.

Thunberg hitched a ride from the US with an Australian family on their 48-ft (15-metre) yacht.

The white catamaran carrying Thunberg sailed slowly up the River Tagus under blue skies and a stiff breeze. Thunberg’s father, Svante, was also on the boat as it approached the Lisbon quayside.

“She has been a leader that has been able to move and open hearts for many young people and many people all over the world,” Schmidt said at the summit in Madrid. “We need that tremendous force in order to increase climate action,.”

Thunberg was due to be met in Lisbon by local dignitaries and other activists. Her representatives said they could not confirm when she would travel to the Spanish capital.

Greta Thunberg was right: There is an alternative to ‘eternal economic growth’: Don Pittis

Author Naomi Klein talks about solutions to the climate crisis, Greta Thunberg and how she finds hope