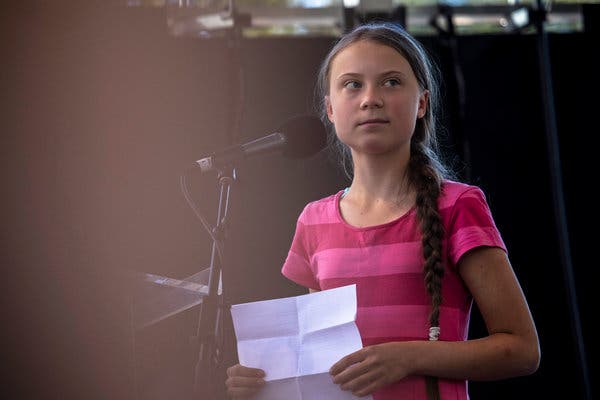 Greta Thunberg at a rally in New York on Sept. 20, one of many climate demonstrations around the world that week.Credit…Brittainy Newman/The New York Times

Greta Thunberg is sailing across the Atlantic, again. It’s much sooner than she had planned, but not before she makes her mark in the United States.

Ms. Thunberg, the 16-year-old Swedish climate activist, was scheduled to set sail from Hampton, Va., on Wednesday morning. This time, she will hitch a ride with an Australian couple that sails around the world in a 48-foot catamaran called La Vagabonde and chronicles their travels on YouTube.

La Vagabonde will take roughly three weeks to reach Spain, where Ms. Thunberg hopes to arrive in time for the next round of United Nations-sponsored climate talks.

“I decided to sail to highlight the fact that you can’t live sustainably in today’s society,” Ms. Thunberg said by phone from Hampton on Tuesday afternoon. “You have to go to the extreme.”

Ms. Thunberg doesn’t fly because of the outsize greenhouse gas emissions from aviation. And so her trip from Europe to the United States was also by boat — a racing yacht that set off from Plymouth, England, and arrived in New York harbor to much fanfare in August.

So happy to say I’ll hopefully make it to COP25 in Madrid.
I’ve been offered a ride from Virginia on the 48ft catamaran La Vagabonde. Australians @Sailing_LaVaga ,Elayna Carausu & @_NikkiHenderson from England will take me across the Atlantic.
We sail for Europe tomorrow morning! 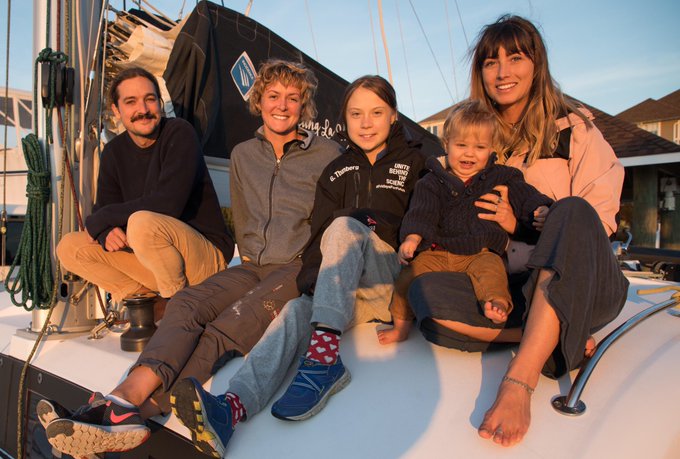 Ms. Thunberg had been traveling slowly across the United States and Canada, appearing on “The Daily Show With Trevor Noah” in New York, protesting alongside Sioux leaders in North Dakota, bike riding in Santa Monica, Calif., with Arnold Schwarzenegger, joining school strikes every Friday from Iowa City to Los Angeles. She had planned to make her way south, mainly by bus and boat, to Santiago, Chile, for the next round of United Nations-sponsored climate negotiations in December.

Her slow travel plans needed to be quickly changed. First came a wave of street protests in Santiago. Chile said the climate talks could no longer be held there. Spain offered Madrid as the venue, and Ms. Thunberg found herself suddenly needing another ride across the ocean.

“It turns out I’ve traveled half around the world, the wrong way,” she said on Twitter. “Now I need to find a way to cross the Atlantic in November… If anyone could help me find transport I would be so grateful.”

Help came from Riley Whitelum, an Australian who has been sailing around the world with his wife, Elayna Carausu. “If you get in contact with me, I’m sure we could organize something,” he responded.

In the span of a week, the voyage was organized. Mr. Whitelum and Ms. Carausu will be joined by a British professional sailor, Nikki Henderson, for this voyage. Ms. Thunberg’s father, Svante, will accompany her back across the ocean, as he did on the westward trip.

The couple’s 11-month-old son, Lenny, will also be onboard, meaning that Ms. Thunberg, who is usually the only child in rooms full of powerful adults, will not be the youngest person in the crowd. “Finally,” she said.

Ms. Thunberg’s extraordinary rise stems, in large part, from the fact that she is a child.

She was 15 when she decided she would skip school and sit in front of the Swedish Parliament, holding a homemade sign that read, in Swedish, “School Strike for the Climate.” She credits her single-minded focus on climate action to what she calls her superpower: Asperger’s syndrome, a neurological difference on the autism spectrum.

Word spread of her solo act of civil disobedience. It buoyed the efforts of other young environmental activists and inspired hundreds of school strikes. Young people organized with the tool that they best know how to use: the internet, mobilizing by the millions, from Melbourne to Kampala to Bonn to New York City. Their anger, like hers, embodied the frustration of their generation at the incongruously slow pace of action in the face of definitive science.

Ms. Thunberg’s fame has grown in the United States. A collection of her speeches, most of them previously published, has been released in a new anthology by Penguin Press. Her angriest speech, delivered to world leaders at the United Nations in September, has been used in a death-metal remix. The likeness of her face is painted on a mural on the side of a building in San Francisco.

Threats of violence have come at her too, along with attacks aimed at her medical condition.

Perhaps her most famous American encounter was with President Trump in the corridors of the United Nations. He didn’t see her. But she saw him, flashing icy daggers with her eyes. Asked what she was thinking in that moment, Ms. Thunberg said, “It speaks for itself.”

Ms. Thunberg said Tuesday that she hoped La Vagabonde would bring her to Spain safely and on time. After that, she was looking forward to going back home to Stockholm and hugging her two dogs. “Traveling around is very fun and I’m very privileged to have the opportunity to do so, but it would be nice to get back to my routines again,” she said.
SOURCE