With EV sales projected to hit 130 million by 2030, the industry faces a potential battery waste problem 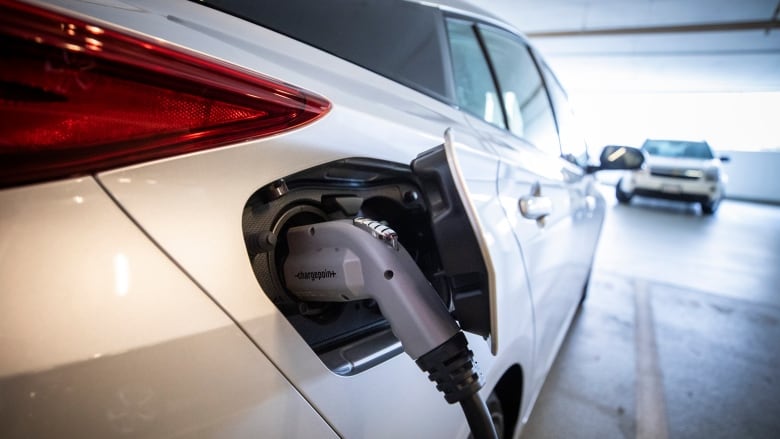 Reusing and recycling the batteries in electric vehicles further reduces the carbon footprint of the cars, touted as a key solution to climate change. (Ben Nelms/CBC)

In his pursuit to completely get off fossil fuels, David Elderton has switched anything with a motor — from his car to his chainsaws — over to battery power.

Even the three-bedroom home he shares with his partner on B.C.’s Salt Spring Island is powered, in part, by a battery from a wrecked Tesla Model S he bought last year; it charges via solar panels mounted on his shed.

The size of two large coolers side by side, he says the battery can keep the lights on for up to five days with conservative power use, and about a day when almost everything is running.

Elderton is part of a community of do-it-yourself electricians offering the batteries from totalled or end-of-life electric vehicles a second life.

“It’s a good feeling not to be buying gas anymore,” he told Day 6. 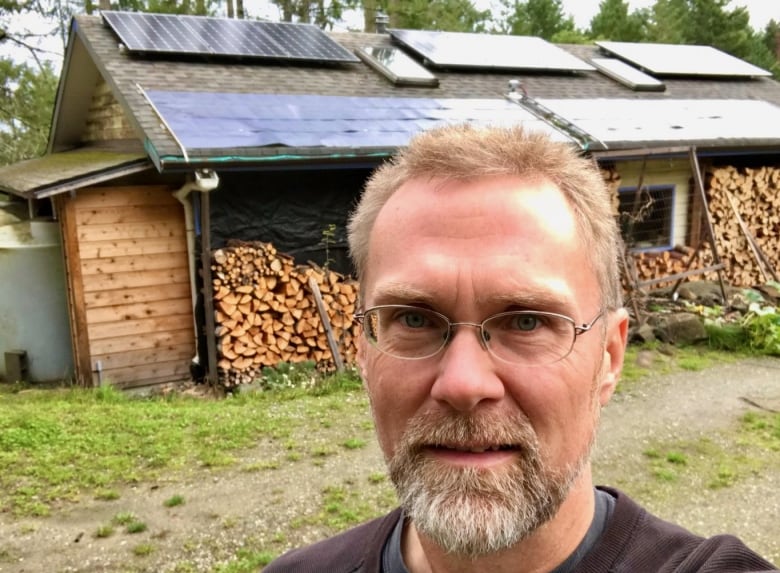 David Elderton has fitted his woodshed with an array of solar panels, which charge the Tesla battery he has connected to his house. They also feed electricity back into British Columbia’s electrical grid. (David Elderton)

A study published Wednesday in the journal Nature found while the electric vehicle “revolution” is crucial to a greener future, it presents a battery waste management problem that should be quickly addressed.

With the International Energy Agency forecasting more than 130 million electric vehicles on roadways worldwide by 2030, manufacturers and startups are looking ahead to keep EV batteries from the landfill through second-life use and recycling.

Research shows that while an electric vehicle will produce fewer carbon emissions compared to a fossil fuel-powered car over its lifetime, building them is energy intensive.

Manufacturing one electric vehicle battery is equivalent to about one year of emissions from a fossil fuel-powered car, according to Olivier Trescases, who heads the University of Toronto’s Electric Vehicle Research Centre.

Based on the typical driver’s annual driving distance, the battery in an electric vehicle could see a 20 per cent reduction after about 150,000 km. (Ben Shannon/CBC)

Reusing and recycling the batteries further reduces the carbon footprint of the personal vehicles, he said, which are touted as a key solution to climate change.

Like a cellphone battery, electric vehicle batteries lose capacity as they are charged and discharged. That means less range and more frequent charging — but not that it’s necessarily ready for the dump.

“Once the battery degrades to, let’s say 20 per cent below its nominal capacity, then you can actually use it, repurpose it for stationary applications,” said Trescases. “Then finally [move to] recycling and repurposing.”

This year, Nissan began powering streetlights in Japan and a stadium in the Netherlands with customers’ used batteries. In 2015, General Motors took on a similar project at their data centre in Michigan. 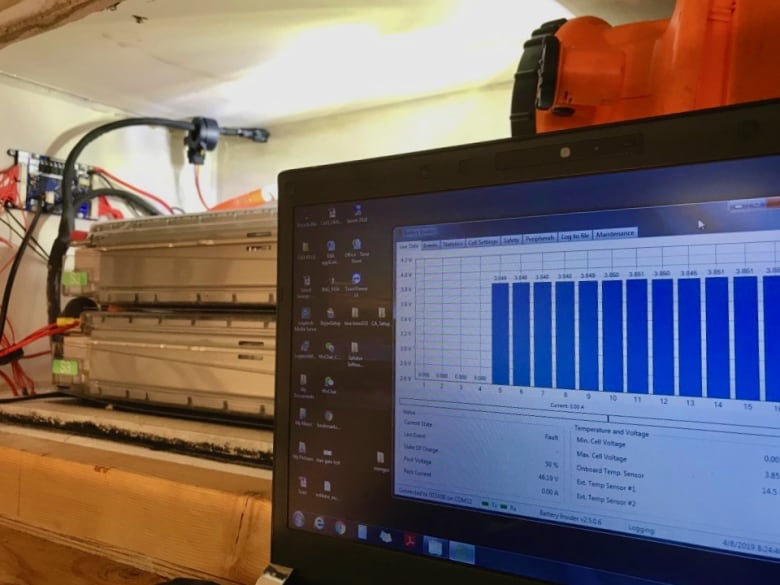 But DIY builders have used the older batteries in their homes as makeshift powerwalls.

“There [are] people who are trying to save money on their power bill. There are people who are living off-grid, whether it be in a house or a cabin or maybe an RV,” Elderton said.

“I think there’s just something about batteries that is fascinating and people like to play around with them.”

Particularly crafty do-it-yourselfers have even fitted sailboats and classic cars with electric motors for a silent ride.

Repurposing an electric vehicle battery at home can be risky. The battery packs hold a lot of energy, and when damaged, lithium-ion batteries can explode.

But researchers suggest that second-life solutions are preferable to direct recycling.

“What makes that the most compelling is when you design the battery from the get-go to actually make a seamless transition from the first life in the car to second life in stationary,” he said.

According to Jessika Trancik, an energy systems researcher at MIT, second-life solutions and recycling of the battery packs could also be a key element in eliminating one of the main barriers to EV adoption: Sticker shock.

“Finding either a way to capture the value in the metals in the battery through recycling or … finding valuable second-life applications can reduce the upfront cost of electric vehicles,” she said.

As electric vehicles age, here’s how the batteries are finding a second life  A study published in the journal Nature finds that while the EV “revolution” is crucial to a greener future, it presents a battery waste management problem. Manufacturers, startups — and everyday Canadians — are already looking ahead. 9:24

Established companies and startups are already gearing up for what they say is an oncoming onslaught of spent batteries from the first commercially available electric vehicles, which are expected to reach end of life by 2025.

According to Kunal Phalpher, chief commercial officer for Li-Cycle, a battery recycling startup in Mississauga, Ont., vehicle manufacturers want to do the right thing when it comes to disposing batteries.

“I would say that it’s really more rare that the battery ends up in the wrong place from the EV space than say portable electronics,” he said, pointing to e-waste from devices like cellphones and laptops that may end up forgotten in a drawer or thrown in the garbage. 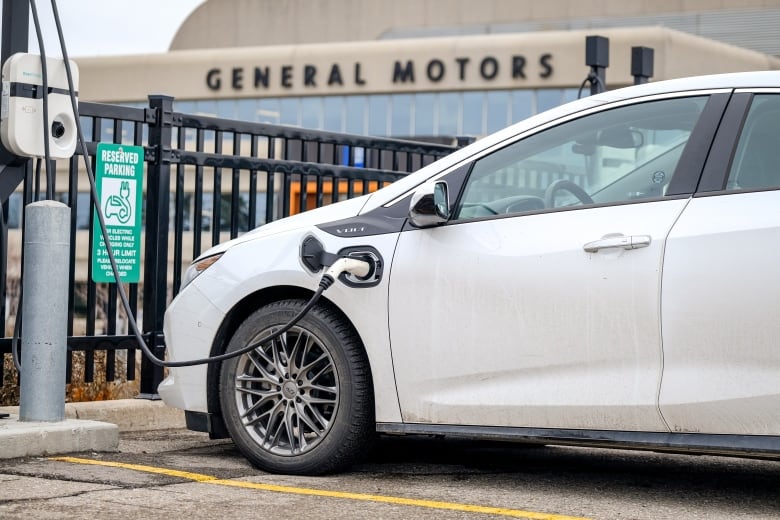 In Canada, charging an EV emits less carbon dioxide than burning a tank of gas because electricity is generated mostly by carbon-free sources. ‘Simply by switching to an electric vehicle, you can reduce your greenhouse gas emissions from driving by 40 per cent or more,’ said Jessika Trancik. (Evan Mitsui/CBC)

A handful of Canadian companies, including Li-Cycle, say they have developed processes that can mine the valuable — and finite — materials that might otherwise remain locked in depleted lithium-ion batteries.

“The process that we’ve been developing is able to produce raw material — very pure, so battery-grade material — that we can ship back directly for people that are producing batteries,” said Samuel Fournier, head of business development at Montreal-based Lithion Recycling.

Both Li-Cycle and Lithion use a process called hydrometallurgy; after the batteries are mechanically dismantled, solvents are used to separate the essential minerals and metals.

Li-Cycle says their process can recover 80 to 100 per cent of materials, and Lithion claims 95 per cent.

Currently, battery recycling often takes place in China and South Korea and, as this week’s Nature study notes, stockpiling or shipping batteries has its own set of environmental concerns.

Fournier says Lithion hopes to open small-scale plants that will be able to recycle batteries locally, reducing the need for shipping and cutting down on carbon emissions.

“We treat this a bit as urban mining,” he said, adding their first pilot plant is expected to open in Montreal early next year.

By using recycled materials, Phalpher says automakers will be able to significantly reduce their carbon emissions.

“People are looking at … the CO2 footprint of the complete life cycle of the car,” he said. “Having recycled raw material in their supply chain will significantly benefit them.” SOURCE

2 thoughts on “As electric vehicles age, here’s how the batteries are finding a second life”