Bill Gates and others warn that higher taxes would lead to lower growth. They have their facts backward.

By The Editorial Board

The editorial board is a group of opinion journalists whose views are informed by expertise, research, debate and certain longstanding values. It is separate from the newsroom. 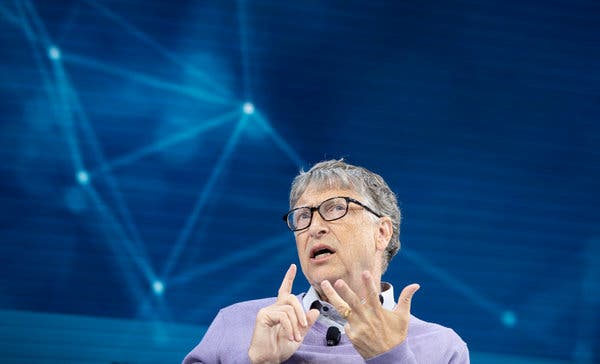 Yet he is now the latest affluent American to warn that Senator Elizabeth Warren’s plan for much higher taxes on the rich would be bad not just for the wealthy but for the rest of America, too.

Mr. Gates, the co-founder of Microsoft, suggested on Wednesday that a big tax increase would result in less economic growth. “I do think if you tax too much you do risk the capital formation, innovation, U.S. as the desirable place to do innovative companies — I do think you risk that,” he said.

Other perturbed plutocrats have made the same point with less finesse. The billionaire investor Leon Cooperman was downright crude when he declared that Ms. Warren was wrecking the American dream. Jamie Dimon, the chief executive of JPMorgan Chase, complained on CNBC that Ms. Warren “uses some pretty harsh words” about the rich. He added, “Some would say vilifies successful people.”

Let’s get a few things straight.

The wealthiest Americans are paying a much smaller share of income in taxes than they did a half-century ago. In 1961, Americans with the highest incomes paid an average of 51.5 percent of that income in federal, state and local taxes. In 2011, Americans with the highest incomes paid just 33.2 percent of their income in taxes, according to a study by Thomas Piketty, Emmanuel Saez and Gabriel Zucman published last year. Data for the last few years is not yet available but would most likely show a relatively similar tax burden.

The federal government needs a lot more money. Decades of episodic tax cuts have left the government deeply in debt: The Treasury is on pace to borrow more than $1 trillion during the current fiscal year to meet its obligations. The government will need still more money for critical investments in infrastructure, education and the social safety net.

This is not an endorsement of the particulars of Ms. Warren’s tax plan. There is plenty of room to debate how much money the government needs, and how best to raise that money. The specific proposals by Ms. Warren and one of her rivals, Senator Bernie Sanders, to impose a new federal tax on wealth are innovations that require careful consideration.

But a necessary part of the solution is to collect more from those Americans who have the most.

And there is little evidence to justify Mr. Gates’s concern that tax increases of the magnitude proposed by Ms. Warren and other candidates for the Democratic presidential nomination would meaningfully discourage innovation, investment or economic growth.

The available evidence strongly suggests that taxation exerts a minor influence on innovation. Experts have an imperfect understanding of what drives innovation, but taxation isn’t in the same weight class as factors including education, research and a consistent legal system.

Congress has slashed taxation three times in the past four decades, each time for the stated purpose of spurring innovation, investment and growth. Each time, the purported benefits failed to materialize. President Trump initiated the most recent experiment in 2017. The International Monetary Fund concluded this year that it had not worked.

Moreover, while higher tax rates may weigh modestly against innovation and investment, that calculus is incomplete. It ignores the question of what the government does with the additional money. It also ignores the possibility that higher taxes could result in more innovation.

A study of American patent holders found that innovators tend to come from wealthy families, to grow up in communities of innovators and to receive high-quality educations in math and science. Mr. Gates, one of the most successful entrepreneurs in American history, fits the profile: He grew up in an affluent family and received the best education money could buy.

The implication of that study, and related research, is that public investment, funded by taxation, could give more kids the kinds of advantages enjoyed by the young Mr. Gates.

There is no doubt that it is theoretically possible to raise taxes to prohibitive heights: If people had to pay a tax of 100 percent of the next dollar they earned, they would be likely to call it a day.

But the alarm bells are out of all proportion with Ms. Warren’s plan. Describing his concerns on Wednesday, Mr. Gates at one point suggested he might be asked to pay $100 billion.

To his credit, Mr. Gates has said that he thinks the wealthy should pay higher taxes. But that’s not how he behaved on Wednesday. He can demonstrate that he’s serious about tax increases by setting aside the hyperbole and engaging in principled and factual debate about the details. SOURCE