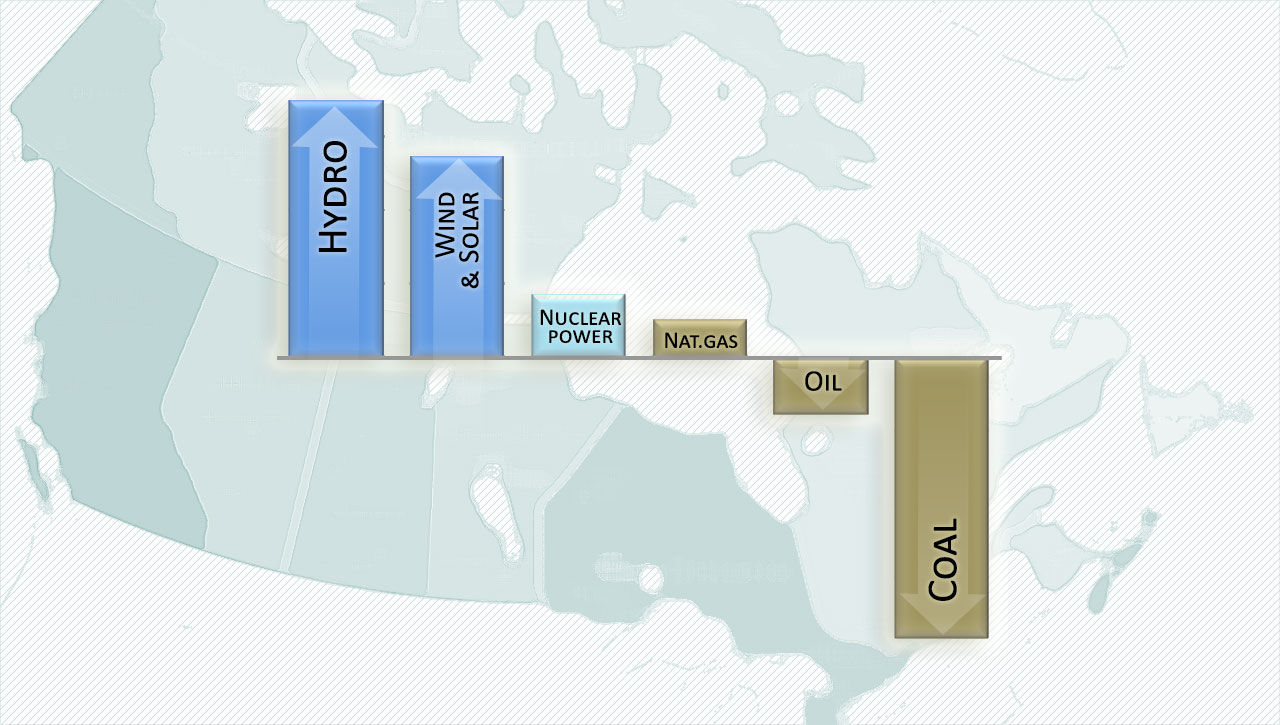 All across Canada, electricity generation has been getting much cleaner.

It’s our country’s one big climate success so far.

To illustrate how quickly electric power is being cleaned up, what’s still left to do, and the benefits it brings, I’ve dug into Canada’s latest emissions inventory and created a series of charts below.

The sector that could 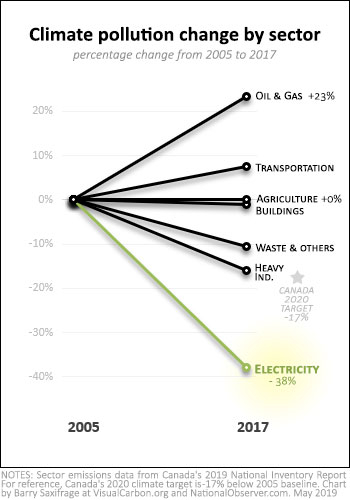 My first chart shows how Canada’s economic sectors have changed their climate pollution since 2005.

While most sectors have increased their pollution or made little progress in the climate fight, our electricity sector has shined.

As the green line shows, Canadians have eliminated an impressive 38 per cent of the climate pollution from electricity generation in just over a decade.

To put these shifts into context, I’ve shown Canada’s 2020 climate target on the chart as a gray star. This target was set by the Harper government as part of the global Copenhagen Accord. Specifically, Canada pledged to cut our climate pollution 17 per cent below 2005 levels.

As you can see, the electricity sector is the only one to have done that so far. And it didn’t just hit the target — it cut more than twice as much. 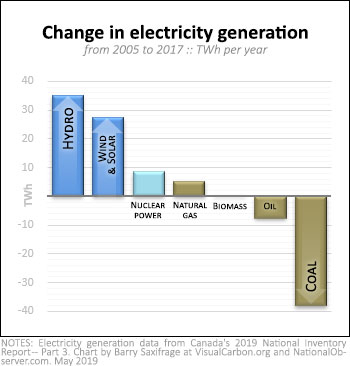 My next chart shows how the electricity mix changed. The big climate pollution cuts came primarily from reductions in coal burning. But there were also significant reductions in burning oil — down 70 per cent — that more than offset the rise in natural gas.

The decline in coal-fired power was replaced (and then some) by increases in zero-emissions sources — hydro, wind, solar and nuclear.

As a result, Canada’s overall electricity generation is now 84 per cent fossil free.

A primary reason why electricity emissions fell so quickly is because every province worked to clean them up.

“All across Canada, electricity generation has been getting much cleaner. It’s our country’s one big climate success so far,” writes @bsaxifrage 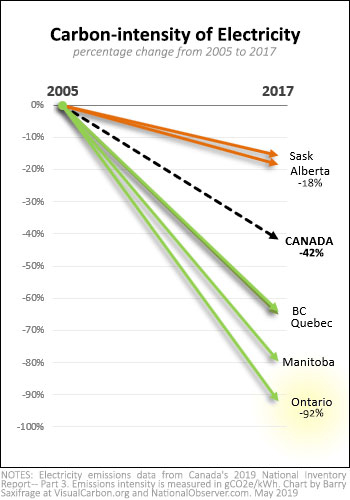 My next chart illustrates this rare example of Canada-wide climate progress. It shows how quickly the carbon-intensity of electricity generation has declined in different provinces.

(Note: carbon-intensity is the amount of climate pollution emitted per kilowatt-hour of electricity generated: gCO2e/kWh).

Ontario clearly led the way with an amazing 92 per cent reduction in climate pollution per kWh in just twelve years. Most of that came from ending the burning of coal in their power plants. But a big chunk also came from cutting in half the amount of natural gas they burn for electricity.

Even Alberta and Saskatchewan, which were otherwise busy increasing their overall climate pollution, made progress in cleaning up their electricity.

These real-world examples show that rapid and substantial climate progress can happen in Canada when a broad-spectrum of political parties and provinces decide to act.

Most Canadians now have superclean electricity

As a result of this rapid cleanup, most Canadians now have access to superclean energy. 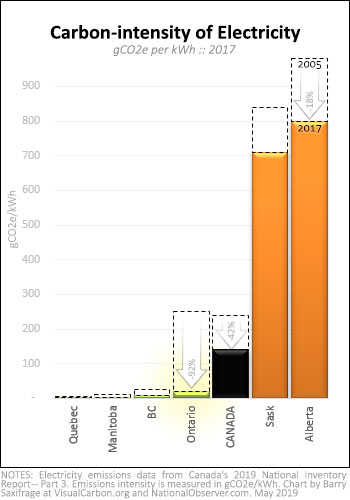 Who has it? And how clean is it?

My next chart shows you. Each bar shows the carbon-intensity of electricity generated in Canada’s major provinces. And the improvements made since 2005 are shown as dashed boxes on top.

The biggest climate story here is the superclean electricity generated by the four provinces shown on the left side — Quebec, Manitoba, B.C. and Ontario. Eighty per cent of Canadians live in these provinces and have access to this climate-safe energy source.

Those living in Alberta and Saskatchewan, however, still have fairly dirty electricity — as shown in orange on the right. A lot more cleanup must happen here before the families and businesses in these provinces have a climate-safe energy supply.

What’s left to do?

Canada’s electricity sector has two big climate tasks remaining: finishing the cleanup of existing power and generating even more clean energy to replace fossil fuels like the gasoline and natural gas used by vehicles, factories and other buildings. MORE