The Earth cannot accommodate our need and greed for food. We must change our diet before it’s too late 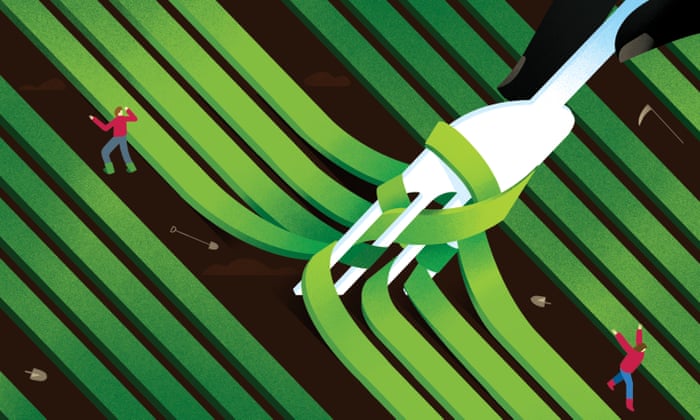 Brexit; the crushing of democracy by billionaires; the next financial crash; a rogue US president: none of them keeps me awake at night. This is not because I don’t care – I care very much. It’s only because I have a bigger question on my mind. Where is all the food going to come from?

By the middle of this century there will be two or three billion more people on Earth. Any one of the issues I am about to list could help precipitate mass starvation. And this is before you consider how they might interact.

The trouble begins where everything begins: with soil. The UN’s famous projection that, at current rates of soil loss, the world has 60 years of harvests left, appears to be supported by a new set of figures. Partly as a result of soil degradation, yields are already declining on 20% of the world’s croplands.

Now consider water loss. In places such as the North China Plain, the central United States, California and north-western India – among the world’s critical growing regions – levels of the groundwater used to irrigate crops are already reaching crisis point. Water in the Upper Ganges aquifer, for example, is being withdrawn at 50 times its recharge rate. But, to keep pace with food demand, farmers in south Asia expect to use between 80 and 200% more water by the year 2050. Where will it come from?

The next constraint is temperature. One study suggests that, all else being equal, with each degree celsius of warming the global yield of rice drops by 3%, wheat by 6% and maize by 7%. These predictions could be optimistic. Research published in the journal Agricultural & Environmental Letters finds that 4C of warming in the US corn belt could reduce maize yields by between 84 and 100%.

The reason is that high temperatures at night disrupt the pollination process. But this describes just one component of the likely pollination crisis. Insectageddon, caused by the global deployment of scarcely tested pesticides, will account for the rest. Already, in some parts of the world, workers are now pollinating plants by hand. But that’s viable only for the most expensive crops.

Then there are the structural factors. Because they tend to use more labour, grow a wider range of crops and work the land more carefully, small farmers, as a rule, grow more food per hectare than large ones. In the poorer regions of the world, people with fewer than five hectares own 30% of the farmland but produce 70% of the food. Since 2000, an area of fertile ground roughly twice the size of the UK has been seized by land grabbers and consolidated into large farms, generally growing crops for export rather than the food needed by the poor.

While these multiple disasters unfold on land, the seas are being sieved of everything but plastic. Despite a massive increase in effort (bigger boats, bigger engines, more gear), the worldwide fish catch is declining by roughly 1% a year, as populations collapse. The global land grab is mirrored by a global sea grab: small fishers are displaced by big corporations, exporting fish to those who need it less but pay more. About 3 billion people depend to a large extent on fish and shellfish protein. Where will it come from?

…There are no easy answers, but the crucial change is a shift from an animal- to a plant-based diet. All else being equal, stopping both meat production and the use of farmland to grow biofuels could provide enough calories for another 4 billion people and double the protein available for human consumption. Artificial meat will help: one paper suggests it reduces water use by at least 82% and land use by 99%.

The next green revolution will not be like the last one. It will rely not on flogging the land to death, but on reconsidering how we use it and why. Can we do this, or do we – the richer people now consuming the living planet – find mass death easier to contemplate than changing our diet?