One of the turbines of the White Pines Wind Farm is seen on Oct. 29, 2019. Photo courtesy of Bill White.

The crane has been on-site at the White Pines Wind Farm in picturesque Prince Edward County for more than a week now, and on Tuesday, local landowners and other supporters of the axed project decided it was time to say goodbye.

The first of nine turbines on the site was due to be dismantled and removed, marking the start of a decommissioning expected to take at least three years, so supporters of the project gathered to give speeches and commiserate its demise.

The partially built site outside Milford was singled out for decommissioning in a bill that ruled its owner-operators, a company called wpd Canada run by two German investors, could only reclaim costs sunk into the project over its 10-year life, an amount estimated around $100 million.

“Everyone else is building more green energy, and we’re tearing down the ones we’ve already built,” said Jen Ackerman, who owns farmland on which she agreed to locate one of the company’s turbines. “It’s insanity.”

“They’ve turned their backs on the local farmers like myself that say, ‘Hey, this turbine was the best crop I could ever grow,” she said.

The bill terminated the 2010 contract between the province’s Independent Electricity System Operator (IESO) and wpd which locked in a subsidized rate under a policy of the former Liberal government to boost renewable energy production.

Other locals argue that the project was ill-conceived and construction of the turbines rushed through despite environmental concerns. The Alliance to Protect Prince Edward County says any major wind project in the region would be “detrimental to its unique historical, agricultural, cultural and rural character.”

(National Observer dug into the dispute over White Pines in a feature last year.)

White Pines was originally proposed as a 60 MW facility with 29 turbines (later reduced to nine turbines and 18 MW after local opposition) and a substation on privately owned agricultural lands. The substation and nine turbines were in various stages of construction when the project was cancelled.

A missing bolt required for the dismantling work means it has now been postponed until next week, a slight reprieve that Ackerman holds out hope could turn into a late reversal on Ford’s part.

“Anything can be turned around,” she said. “Doug Ford turned around that deal with the CUPE teachers. He turned that around at 11 o’clock on a Sunday night and the teachers went to work on Monday morning.

“We don’t give up hope. There is always hope he’ll come to his senses.” 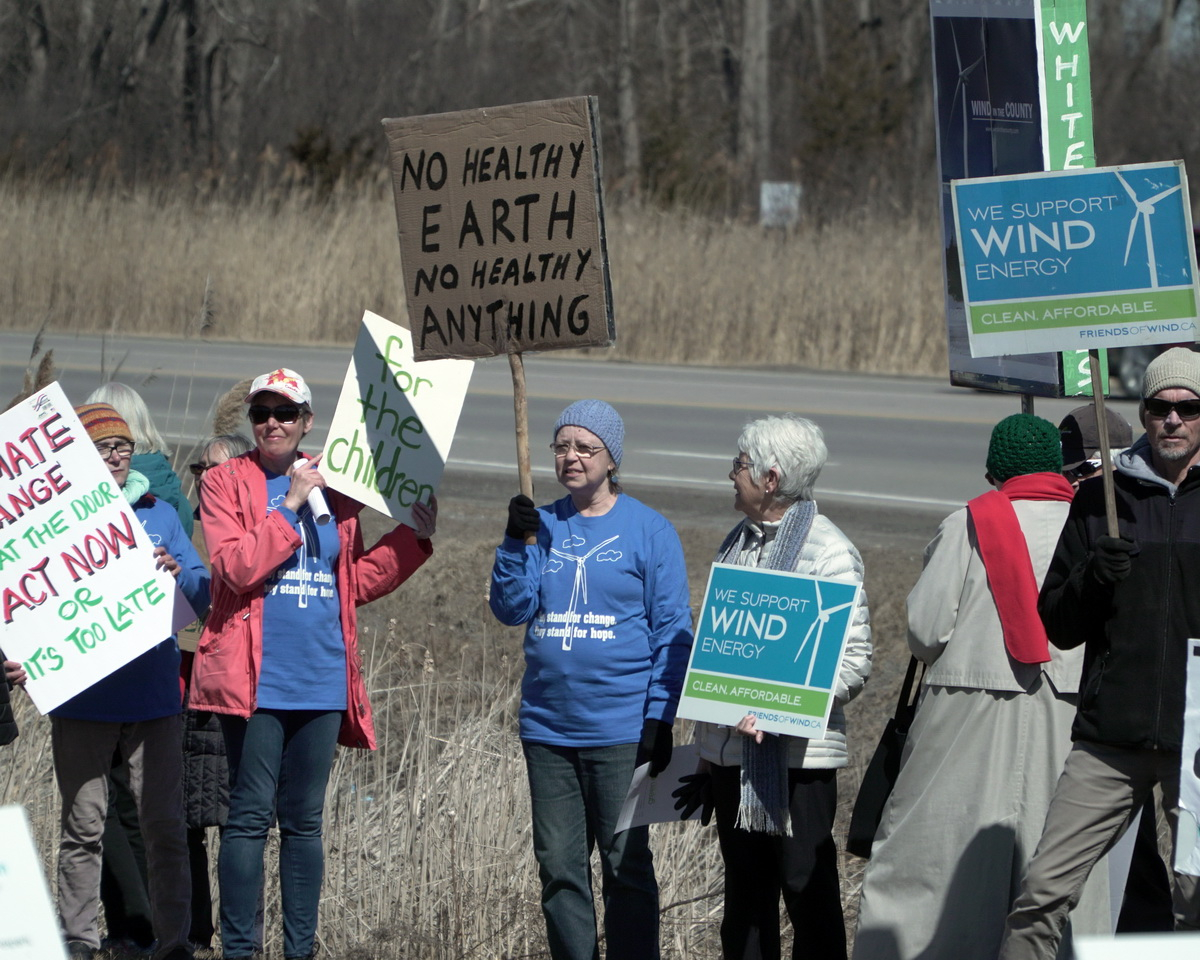 A previous protest against the decommissioning of the White Pines Wind Farm. Photo courtesy of County Sustainability Group