Boris Johnson’s gung-ho claims may be wide of the mark, but scientists pursuing the holy grail of energy generation are taking giant steps 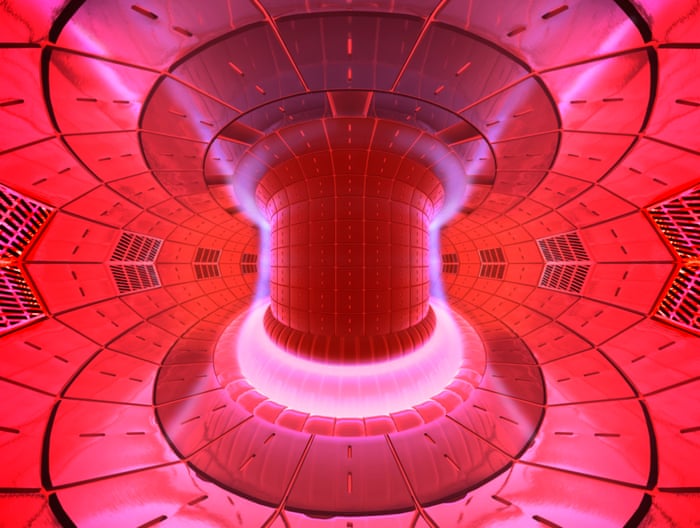 An artist’s rendering of the reaction vessel at Iter in the south of France. Photograph: David Parker/Science Photo Library

“They are on the verge of creating commercially viable miniature fusion reactors for sale around the world,” Boris Johnson told the Conservative party conference earlier this month – “they” apparently being UK scientists. It was, at best, a rash promise for how nuclear fusion might make the UK carbon-neutral by the middle of the century – the target recommended by the Committee on Climate Change, which advises the government. “I know they have been on the verge for some time,” Johnson hedged. “It is a pretty spacious kind of verge.” But now, he assured his audience, “we are on the verge of the verge”.

It’s a familiar and bitter joke about nuclear fusion as an energy source that, ever since it was first mooted in the 1950s, it has been 30 years away. Johnson’s comments had the extra irony that Brexit could merely add to that distance.

It’s not clear what “commercially viable miniature fusion reactors” the prime minister had in mind. There are no such things either existing or planned at the main British centre for fusion research, the Joint European Torus (Jet) at Culham in Oxfordshire, which Johnson visited in August. Experiments at Jet, conducted by all partners within the 28-state Eurofusion consortium, aim to make the nuclear fusion of hydrogen – the process that powers the sun and other stars – viable for energy generation by collecting the heat released to drive turbines for electricity. When Jet is running, the temperature inside is more than 100m C, making it “the hottest place in the solar system” according to Jet’s director, Ian Chapman.

Nuclear fusion is the merging of atoms. Every atom contains a very dense central blob called the nucleus, made up of particles called protons and neutrons. Atoms of different chemical elements have nuclei with different numbers of protons. If two nuclei collide at high enough energy, they can amalgamate to form a different, heavier element. It requires very high temperatures and densities: inside the sun, temperatures of 10m C or so enable hydrogen atoms to fuse into helium. This process releases energy, which makes the sun shine.

Today’s nuclear power plants use not fusion but nuclear fission: the splitting apart of heavy nuclei. This happens spontaneously for radioactive elements such as uranium, and it too releases energy. But both the fuel and the products may remain highly radioactive for very long times – hundreds of thousands of years – creating health hazards and waste-disposal problems. What’s more, the fission process, which involves chain reactions that induce fission, can be hard to control and shut down, as the Chernobyl and Fukushima disasters, in Ukraine and Japan, showed. Fusion is “nuclear power done right” – potentially much cleaner, safer and more efficient. “It seems too good to be true – high power density, low and manageable waste production, and no possibility of uncontrolled energy release,” says Tim Luce, chief scientist on the large international fusion project Iter, in the south of France. “But it is true!” MORE