Declaratory powers, constitutional powers and rule of law can be used to push projects through in the national interest. 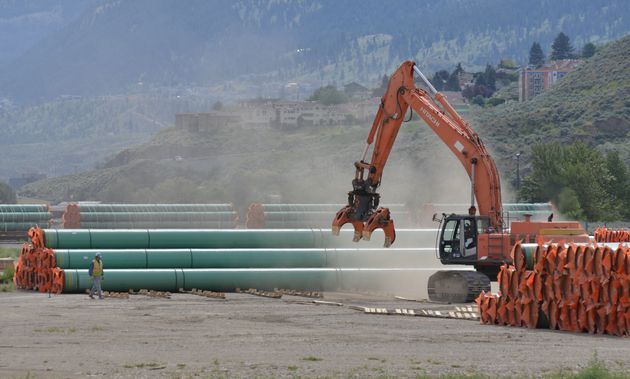 Steel pipe to be used in the oil pipeline construction of the Trans Mountain Expansion Project in Kamloops, B.C. on May 29, 2018.  DENNIS OWEN / REUTERS

Many Canadians can recall the $4.5-billion Trans Mountain pipeline that Liberal Party leader Justin Trudeau’s government purchased in what appeared to be a last-ditch effort to save the expansion project from B.C. opposition. What those living outside Alberta may forget is that Trudeau’s government also cancelled the proposed Northern Gateway Pipeline at an expense of nearly $15 million.

It was this Northern Gateway Pipeline, that would have stretched across the northern part of the Alberta-British Columbia border, that Conservative Party leader Andrew Scheer invoked during the first MacLean’s/CityTV leadership debate. When the debate focused on Conservative senators’ attempts to kill C-262, which opposition view as giving Indigenous communities the final say on resource projects, Scheer said, “We cannot create a system in this country where one group of individuals, one Indigenous community, can hold hostage large projects that employ so many Indigenous Canadians.”

It’s telling that the “one group” Scheer singles out are Indigenous communities opposing pipeline projects. These conversations about energy and pipelines, and who decides how, when and where they get built, highlight the need for clarity about the federal government’s constitutional powers to push projects through.

Constitutional powers and rule of law

You’ll often see terms like “declaratory powers,” “constitutional powers” or “rule of law” thrown around by politicians like Trudeau, Scheer and Alberta Premier Jason Kenney. Confusing at best, all three fall under the heading of constitutional law, but look or operate differently. They are legal tools that could potentially allow federal or provincial governments alike to rely on the vague concept of the public interest (sometimes a purely economic test) when companies seek approval for projects.

In the context of resource projects, the outcome is that the rights of groups directly impacted by the thousands of kilometres of pipelines running or planned across our country are ignored as politicians seek to assert their jurisdiction over an issue. This jurisdiction that political leaders refer to is found in Canada’s Constitution, section 92(10).

Canada is a country of the rule of law, and the federal government will act in the national interest. Access to world markets for Canadian resources is a core national interest. The Trans Mountain expansion will be built. https://twitter.com/jimcarr_wpg/status/983109315958484992 …

See my statement regarding the Trans Mountain Expansion. https://www.canada.ca/en/natural-resources-canada/news/2018/04/minister-carr-issues-statement-regarding-trans-mountain-expansion.html …

Relying on their declaratory powers, the federal government may use legislation to declare specific works as being to the general advantage of Canada — particularly when there is uncertainty over infrastructure or networks, or the interprovincial works have an international component or connection. Canada’s constitution provides that Parliament can exercise its declaratory power over works, like pipelines, that extend beyond a province’s boundaries or connect with another province. This can prevent a province declaring its jurisdiction over a pipeline, possibly providing some certainty over the project. 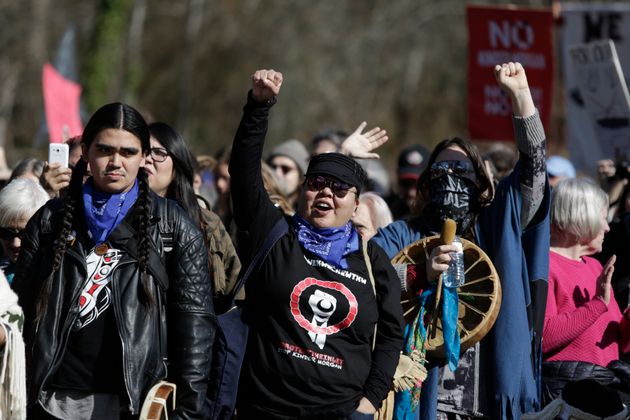 Indigenous groups and others demonstrate against the expansion of the Trans Mountain pipeline project in Burnaby, B.C. on March 10, 2018. JASON REDMOND VIA GETTY IMAGES

While the federal government is free to declare a pipeline such as the Trans Mountain expansion under its declaratory powers, the remainder of the Constitution does not fade away. Other sections in the Constitution include Canada’s duty to consult and accommodate, or Section 35. To non-Indigenous Canadians and politicians, the duty to consult and accommodate may be seen as a barrier to completing projects. In theory, this shouldn’t be the case if relationships between Indigenous and non-Indigenous groups, including companies, are built meaningfully before projects are granted approval from their respective regulators.

The federal government is using declaratory power to sidestep its duty to consult.

The federal government might desire jurisdiction over a pipeline, relying on its declaratory powers, because there is some international component with some integral element involving an interprovincial work. This would be similar to the Trans Mountain Pipeline connecting Canada’s products to an international market, together with the pipeline’s interprovincial infrastructure. Yet, the rule of law says that no one is above the law. One power seems to operate at the bidding of another.

Sometimes, declaratory powers are confused with the rule of law, chiefly when talking about pipelines. Political leaders may cite the rule of law to say that no group, like those Scheer refers to, is above the law — opposing groups must fall in line with the federal government’s objective to complete a work. At the same time, the federal government is using declaratory power to sidestep its duty to consult, a law which applies to everyone.

Indigenous consent is nuanced and necessary

Indigenous peoples and communities are best suited for understanding their communities’ needs, but often left out when it comes to resource projects. They want a seat at the table. Consent is key. MORE