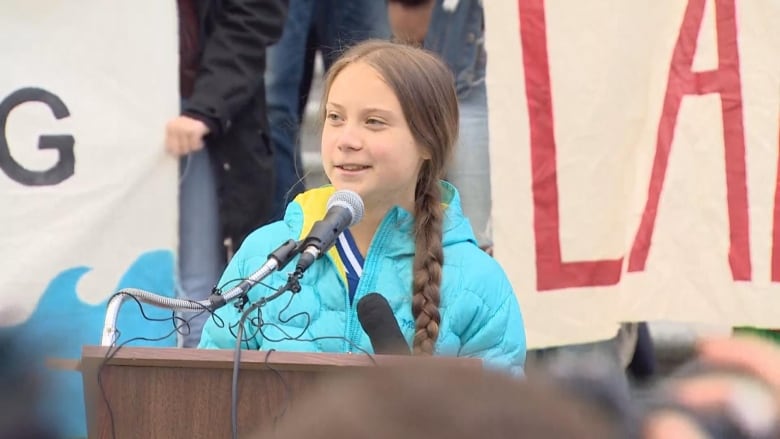 Swedish activist Greta Thunberg spoke to hundreds of climate activists at a rally at the Alberta Legislature in Edmonton on Friday. (Manuel Carrillos/CBC)

By foot, by bus and by truck, thousands of Albertans made their way to the provincial legislature grounds in Edmonton, drawn by a 16-year-old Swedish girl who is trying to convince governments to take action on climate change.

Wearing a turquoise parka, environmental activist Greta Thunberg marched among the hundreds of people along several major downtown Edmonton roads, ending at the Alberta Legislature where hundreds more were waiting to greet her.

Among the crowd were more than 100 people who set out early in the morning from Calgary to show up for the Fridays for Future rally, the climate strikes that originated with Thunberg and have spread around the world.

As Thunberg took the podium, she noted that it seemed like the rally had greatly exceeded that target.

“Today is Friday,” Thunberg said early in her remarks. “And as always, we are on climate strike. Young people all around the globe are today sacrificing their education to bring attention to the climate and ecological emergency.

“We are doing this because our future is at stake.” 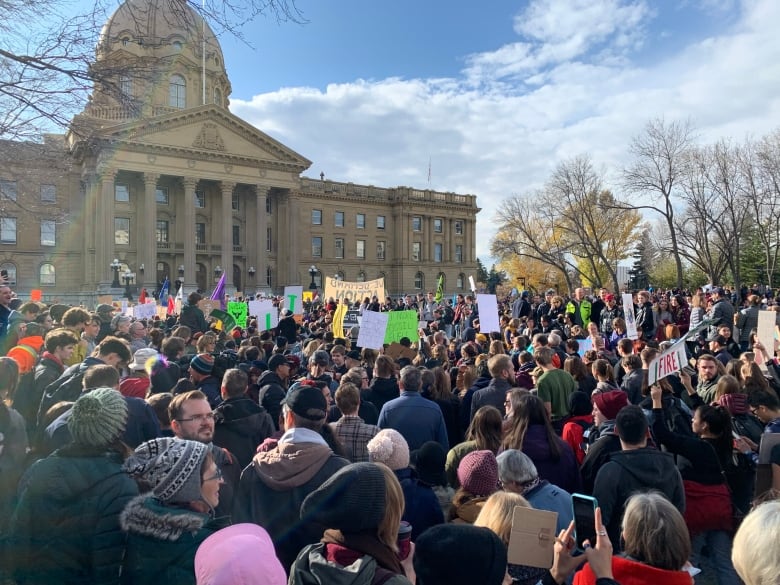 Hundreds of activists, along with some supporters of Alberta’s oil and gas industry, gathered at the legislature. (Peggy Lam/CBC)

The event included prayers, passionate speeches from Indigenous and non-Indigenous youth, and a performance by Chubby Cree, an Indigenous hand drumming group.

Thunberg gave a special shout-out to the young and Indigenous leaders at the rally, saying “you are the hope.”

Her speech touched on many of the themes she is known for: the need to heed science, the need for developed countries — like Sweden and Canada, she said — to lead the way in reducing their emissions to allow developing countries a chance to heighten their standard of living, and the desperate need to do things quickly.

“We need to start treating this crisis as a crisis,” she said. “Because you cannot solve an emergency without treating it as one.”

“And if you think we should be in school instead, then we suggest you take our place in the streets. Or better yet, join us so we can speed up the process.” MORE

One thought on “‘Our future is at stake’: Greta Thunberg tells climate rally in Edmonton”