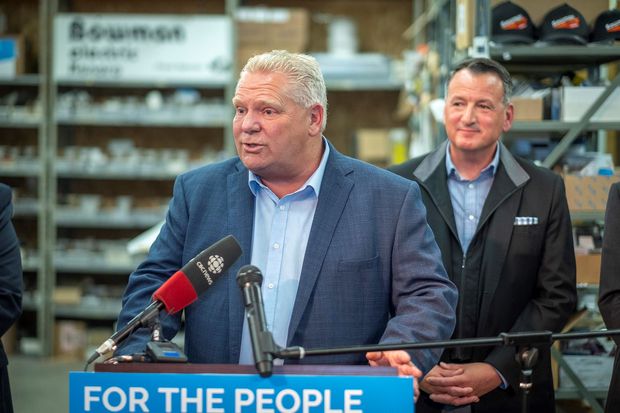 Mr. Ford made the bombshell announcement that the province was halving the number of Toronto’s wards in the middle of the subsequent municipal election campaign in late July, 2018. TOM THOMSON/THE CANADIAN PRESS

Ontario government bureaucrats began working on reducing the size of Toronto City Council less than 24 hours after Premier Doug Ford won the provincial election last year, despite his Progressive Conservative Party not raising the idea during the campaign.

Documents obtained by The Globe and Mail reveal that bureaucrats quickly started researching cutting the number of Toronto city councillors – timing that suggests the move was an undisclosed top priority for the newly elected Premier.

Mr. Ford made the bombshell announcement that the province was halving the number of Toronto’s wards in the middle of the subsequent municipal election campaign in late July, 2018. Toronto launched a legal challenge, which it lost on appeal last month but plans to ask the Supreme Court of Canada for permission to appeal the decision.

Julie O’Driscoll, a spokeswoman for Municipal Affairs and Housing Minister Steve Clark, did not address questions related to the timing of work to cut Toronto city council.

“We were elected on a promise to reduce the size and cost of government and to end the culture of waste and mismanagement; we acted quickly to do just that,” Ms. O’Driscoll said in an e-mail.

On the morning after the election, Mr. Ford announced that his transition team had “already hit the ground running as we prepare to form government.” The government was officially sworn in three weeks later.

Mr. Ford’s surprise move to cut Toronto city council to 25 wards from the planned 47, which was not part of the PCs’ election platform and did not come up on the campaign trail, was widely criticized as overstepping. Mr. Ford, a one-term former Toronto city councillor who has railed about political gridlock at city hall, lost the 2014 mayoral race to Mr. Tory.

“I think this timing only reinforces the fact that the move to slash city council in half in the middle of an election was a political decision,” said Michal Hay, executive director of Progress Toronto, an activist group.

An Ontario Superior Court judge ruled that the government’s intervention was unconstitutional in September, 2018, but the Court of Appeal granted the province’s request to put the ruling on hold pending a final decision. The municipal election proceeded with Mr. Ford’s 25-ward map last October. MORE