No one should be surprised by Alexandria Ocasio-Cortez’s endorsement of Bernie Sanders — just like Sanders, she has continually challenged the neoliberal status quo. 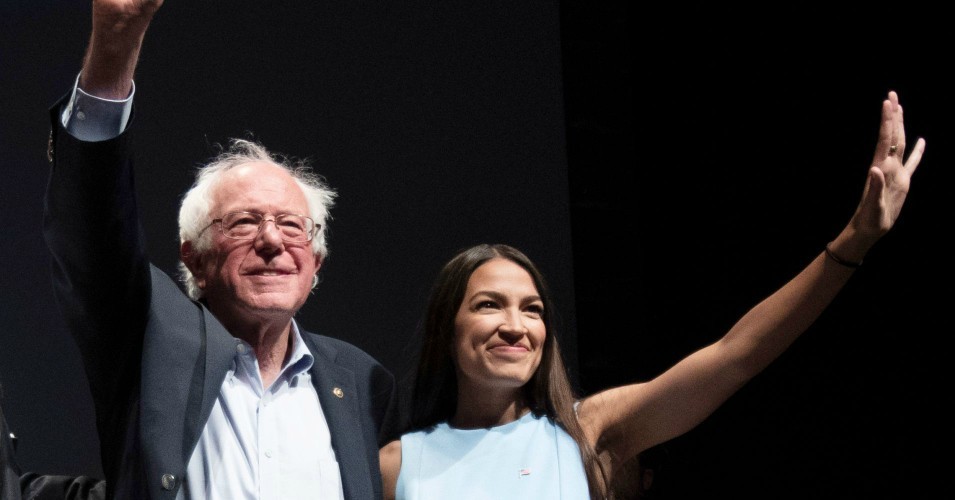 Sen. Bernie Sanders and Rep. Alexandria Ocasio-Cortez wave to the crowd at the end of a campaign rally in Wichita, Kansas on July 20, 2018. (J Pat Carter / Getty Images)

Last month, the New York Times published a story that portrayed Alexandria Ocasio-Cortez as a politician who’s learning that she’ll catch more flies with honey than vinegar. “Ms. Ocasio-Cortez has tempered her brash, institution-be-damned style with something different: a careful political calculus that adheres more closely to the unwritten rules of Washington she once disdained,” the article read.

Ocasio-Cortez bristled at the portrayal. On Twitter she wrote, “There will always be powerful interest in promoting the idea that the left is losing power 1 way or another. The big way they try to dismantle the left isn’t to attack it, but to gaslight & deflate it.” She accused the article of “dripping condescension.”

She’s right: this is the moneyed centrist playbook. See how they’ve covered Bernie Sanders’s 2020 presidential campaign. Unable to characterize him as a naif getting a reality check, the mainstream media has resorted to repeatedly claiming that his campaign is dead in the water — despite the fact that his polling numbers remain consistent and that he’s been breaking all-time fundraising records.

The angle of attack on Sanders is different, but the goal is the same: demoralize and diminish the Left by declaring the battle over already.

It was already unfair to dub Ocasio-Cortez another would-be reformer who’s capitulated to the conservatizing pressures of the Democratic Party establishment. She has continually challenged the neoliberal status quo, especially in the realm of policy. Her Green New Deal legislation is phenomenally ambitious, as is the new suite of bills she’s calling “A Just Society.”

And last night, news broke that proves that she’s still bucking the pro-corporate Democratic Party consensus: according to the Washington Post, Ocasio-Cortez will endorse Sanders for president this weekend, as will Reps. Rashida Tlaib and Ilhan Omar. So much for conciliation with the status quo. MORE