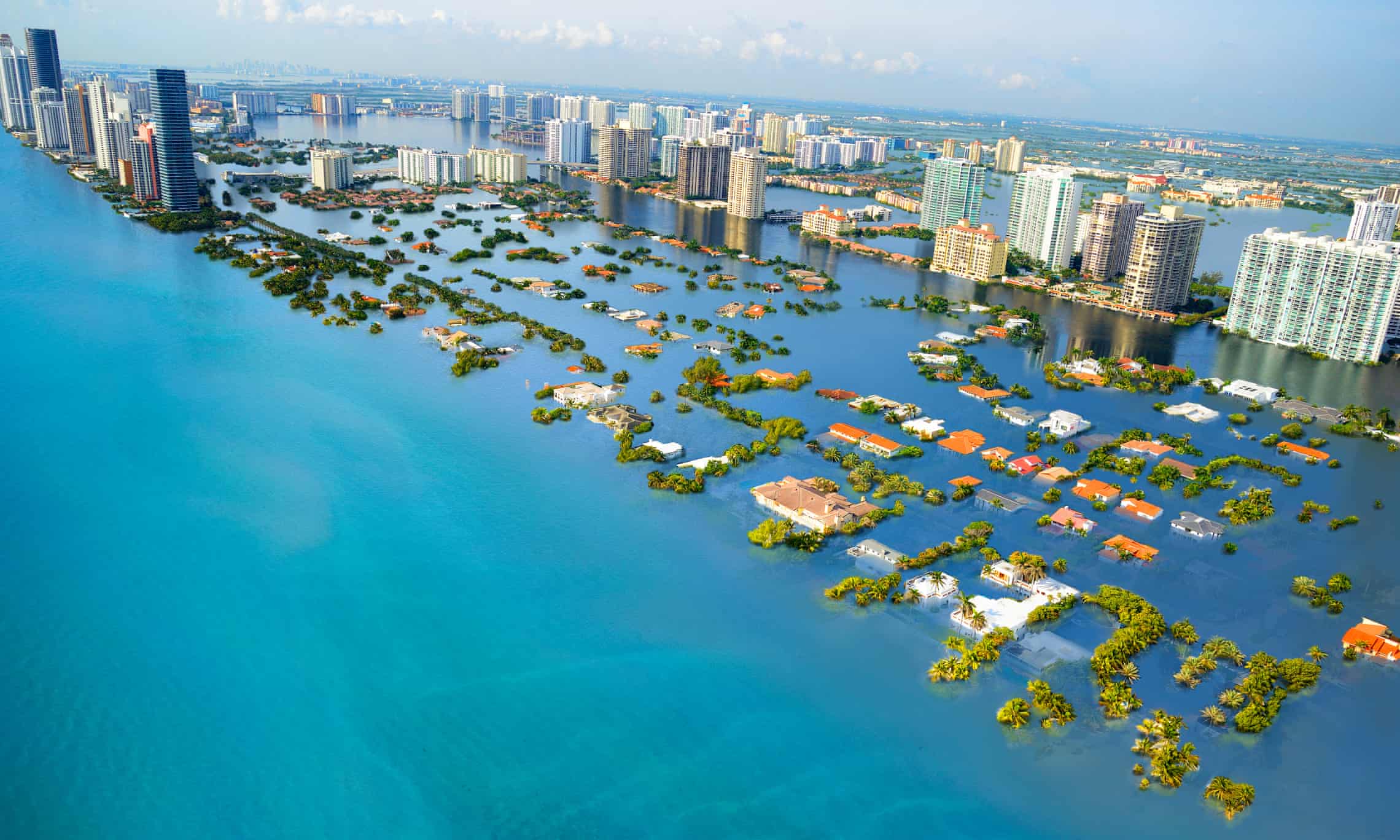 It is cities, not national governments, that are most aggressively fighting the climate crisis – and in 30 years they could look radically different

She has barely ever been in a car, and never eaten meat or flown. Now 31, she lives on the 15th floor of a city centre tower from where she can just see the ocean 500 yards away on one side and the suburbs and informal settlements sprawling as far as the eye can see on the other.

Life is OK in this megacity. She earns the exact median income and is as green as she feels she can be: she has no children yet, her carbon footprint is negligible, and her apartment, built in the early 2000s, has been retrofitted for climate change with deep insulation, its own solar air-con and heating systems.

It has a “living” wall of plants and a balcony where she grows a few vegetables. Waste is automatically sorted or composted. Outside it may be roasting, with temperatures often higher than 40C. Inside, she’s cool.

Short-haul flights have been stopped, and she is allowed just one return long-haul flight a year

She loves where she lives, even though the water tastes slightly salty sometimes and there are often electricity outages in the summer months because of the frequent droughts affecting reservoir levels. Her windows catch the breeze, and because the mayor has adapted to climate change by banning cars across the whole city centre and no fossil fuels are burned nearby, there’s little air pollution. She feels healthy.

Food is expensive because of the massive floods and droughts that have affected the world’s main food-growing areas, but most of hers is organically grown and is delivered by drone from the nearby 20-storey “farmscraper” built 10 years ago. Most cities of this size grow as much of their own food as possible these days, as a way to reduce transport emissions.

To make extra money last year, she traded in her annual government carbon and meat quotas. Short-haul flights have been stopped anyway, and like everyone her age, she is allowed just one return flight a year.

But she doesn’t need to travel much now. The city authorities have thrown money at protecting infrastructure and helping people adapt to the higher temperatures and ever more frequent storms. The green spaces have been re-wilded. She can walk safely down the shady, tree-lined streets, cool off in the lido, or visit the urban forest, which the far-sighted city mayor started 20 years ago on wasteland.

But now she really worries. She may have adapted her own life as far as possible to climate change, but so much is out of her control. The world’s population has grown by 2.5 billion people since she was born in 2019, and carbon concentrations reached the 550 ppm (parts per million) milestone last year – just as the IPCC scientists had forecast they would. They were just 407 ppm when she was born.

Despite some international action on climate change, global warming passed the 1.5C mark – considered the maximum for long-term safety – in 2040 and is now heading inexorably for 3C or 3.5C, possibly within 100 years. That is really dangerous and means food and water will be scarcer, the rains will be heavier, and even more people will flood in from rural areas to the city.

Worst of all, the continuing loss of ice at the poles and in the great mountain ranges means sea levels are rising faster than most would have believed possible 30 years ago. The last great superstorm, caused by extraordinarily warm temperatures in the Arctic, flooded miles of coastal settlements and forced the permanent evacuation of dozens of expensive ocean-side apartment blocks. Waves crashed 100 metres beyond the new, higher sea walls. That’s when her water started to taste salty.

Perhaps the time has come for her to sell up and migrate to higher land, she thinks. She has been told that the underground water supplies to her tower block are beginning to be polluted with seawater and might only last 10 years, and that her tower could be deemed unsafe to live in within 20 years because of flooding. But it’s far worse in most parts of the city. There the extremely poor don’t live in strong houses, and can’t build higher walls, relocate, borrow money or adapt so easily.

A view of a flooded lower Manhattan plaza after Hurricane Sandy left most of the area without power in 2012, New York City, USA. Photograph: Justin Lane/EPA

But if she left, where would she go? Every year her apartment is worth less because it is so close to the ocean; property on higher ground now attracts premium prices. Her city has grown vastly in the previous 20 years, as droughts and floods have made farming less profitable and hundreds of thousands of climate-affected people have migrated in from rural areas. Many of them live with only patchy public transport, and endure dreadful air pollution and heat.

This is the climate breakdown reality she was warned about at school, and why she skipped classes to join the great demonstrations of the 2030s. Back in October 2019, the C40 group of 94 global megacities had used IPCC and World Bank figures to forecast that 1.6 billion people living in over 970 world cities would be regularly exposed to extreme high temperatures by 2050.

It said another 800 million people living in 570 cities would be vulnerable to sea level rise and coastal flooding, including the world’s great coastal cities. And it also said that 2.5 billion people (or nearly one in four people on Earth) would be living in the over 1,600 cities where national food supplies were threatened by the climate crisis – including supposedly richer cities such as Athens, Barcelona, Istanbul and Los Angeles. These predictions proved to be accurate.

Her city did its best to adapt, inspired perhaps by a report from the Coalition for Urban Transitions, backed by some of the world’s leading economists, that showed that governments that invested in low-carbon cities could not just help mitigate the effects of the climate crisis but could also massively enhance economic prosperity, attract the most talented people – and, not incidentally, make cities far better places to live.

Permanently cutting 90% of urban emissions in 2019 would have cost the world $1.8tn but would have been generating annual returns of $7tn by now, it said.

“Cities are engines of growth, innovation and prosperity,” António Guterres, then UN secretary general, had said. “It is possible and realistic to realise net-zero emissions by 2050. But to get there we will need the full engagement of city governments combined with national action and support.”

Sadly, most governments did not pay much attention. It’s easy to be wise in retrospect, but money spent then would have been the best investment ever made, she knows. Now the figures seem conservative. Now it is a race against time.

How likely is this future?

By 2050, cities will be home to over 70% of the world population. The great global challenge is to adapt them to the changing climate and reduce emissions.

Many north European cities have started to ditch diesel and petrol, ban cars and plastic and turn to renewable power, aiming to be “carbon-zero”. Seoul is planting 30m trees and expanding its green spaces vastly to create shade; Melbourne and many other Australian and British cities will benefit from ambitious street tree-planting programmes. Denmark, one of the most urban of all European countries, aims to cut emissions by 70% by 2030; its capital, Copenhagen, aims to be carbon-neutral by 2025. 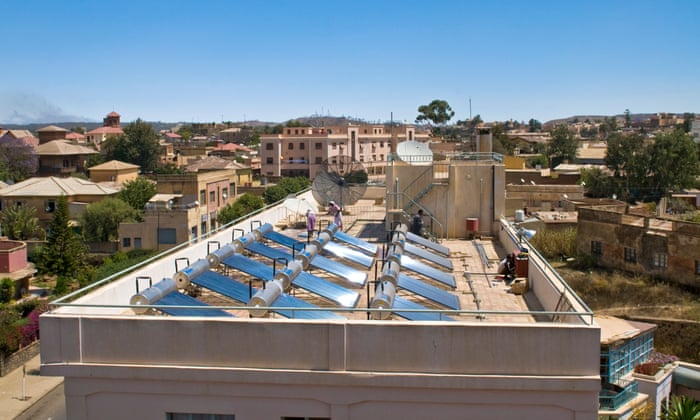