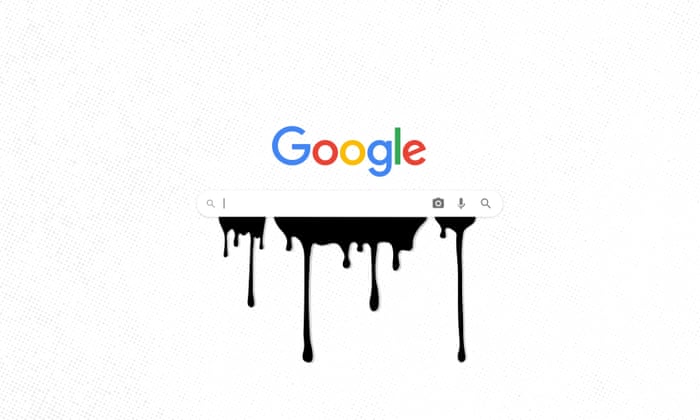 Google helps bankroll more than a dozen organisations that have pushed against moves to stop climate change. Illustration: Guardian Design

Google has made “substantial” contributions to some of the most notorious climate deniers in Washington despite its insistence that it supports political action on the climate crisis.

Among hundreds of groups the company has listed on its website as beneficiaries of its political giving are more than a dozen organisations that have campaigned against climate legislation, questioned the need for action, or actively sought to roll back Obama-era environmental protections.

The list includes the Competitive Enterprise Institute (CEI), a conservative policy group that was instrumental in convincing the Trump administration to abandon the Paris agreement and has criticised the White House for not dismantling more environmental rules.

Google said it was disappointed by the US decision to abandon the global climate deal, but has continued to support CEI.

Google is also listed as a sponsor for an upcoming annual meeting of the State Policy Network (SPN), an umbrella organisation that supports conservative groups including the Heartland Institute, a radical anti-science group that has chided the teenage activist Greta Thunberg for “climate delusion hysterics”.

SPN members recently created a “climate pledge” website that falsely states “our natural environment is getting better” and “there is no climate crisis”.

Google has defended its contributions, saying that its “collaboration” with organisations such as CEI “does not mean we endorse the organisations’ entire agenda”.

It donates to such groups, people close to the company say, to try to influence conservative lawmakers, and – most importantly – to help finance the deregulatory agenda the groups espouse.

A spokesperson for Google said it sponsored organisations from across the political spectrum that advocate for “strong technology policies”.

“We’re hardly alone among companies that contribute to organisations while strongly disagreeing with them on climate policy,” the spokesperson said. Amazon has, like Google, also sponsored a CEI gala, according to a programme for the event reported in the New York Times.

CEI has opposed regulation of the internet and enforcement of antitrust rules, and has defended Google against some Republicans’ claims that the search engine has an anti-conservative bias.

But environmental activists and other critics say that, for a company that purports to support global action on climate change, such tradeoffs are not acceptable.

“You don’t get a pass on it. It ought to be disqualifying to support what is primarily a phoney climate denying front group. It ought to be unacceptable given how wicked they have been,” said Sheldon Whitehouse, a Democratic senator from Rhode Island who is one of the most vocal proponents of climate action in Congress.

“What all of corporate America should be doing is saying if you are a trade organisation or lobby group and you are interfering on climate, we are out. Period,” he added.

On its website, Google says it is committed to ensuring its political engagement is “open, transparent and clear to our users, shareholders, and the public”.

But the company declined to answer the Guardian’s questions on how much it has given to the organisations. MORE