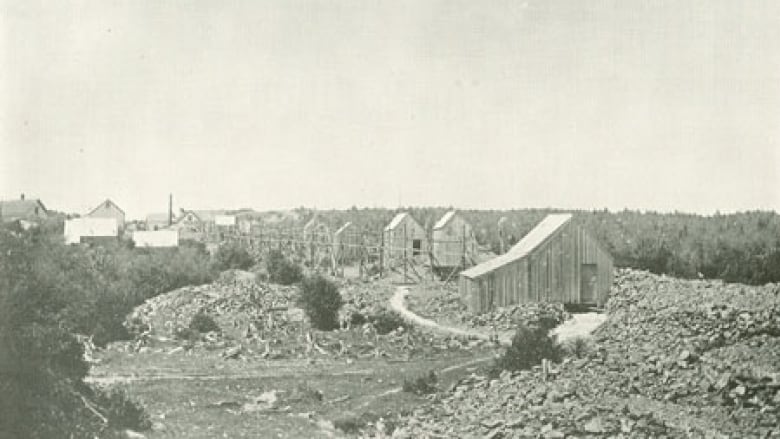 The Montague gold mine as seen in 1911. (Nova Scotia Archives)

Earlier this year, the province announced it will spend $48 million to clean up two of the worst offenders — Goldenville, near Sherbrooke on the Eastern Shore, and Montague Gold Mines, in Dartmouth.

But that task is daunting.

The two sites were mined extensively from the 1860s to the early 1940s. Back then, environmental regulations were non-existent, or, at best, inadequate.

Miners used liquid mercury to extract gold from crushed rock, and the leftover material, called tailings, was simply dumped in the closest body of water.

Arsenic, which occurs naturally in rock, was released as part of the mining process.

The Canadian Council of Ministers of the Environment’s human health and ecological soil quality guidelines for inorganic mercury is 6.6mg/kg. At Goldenville, mercury levels of up to 48 mg/kg were found, and at Montague Gold Mines, they were up to 8.4 mg/kg.

Last month, the province revealed plans to remediate Montague and Goldenville — plans that could serve as a template for future cleanups of other former gold mines.

The plans, pitched by a consortium of companies selected by the province through a tendering process, involve excavating the tailings with the greatest contamination to a depth of two metres and placing them in a lined containment cell.

“You’re controlling what water can get at them and more or less entombing them so that they don’t have a negative effect on the environment any longer,” said Donnie Burke, the executive director of environmental analysis and remediation for Nova Scotia Lands, a provincial Crown corporation responsible for environmental cleanups.

Those areas will then be covered with clean backfill. MORE