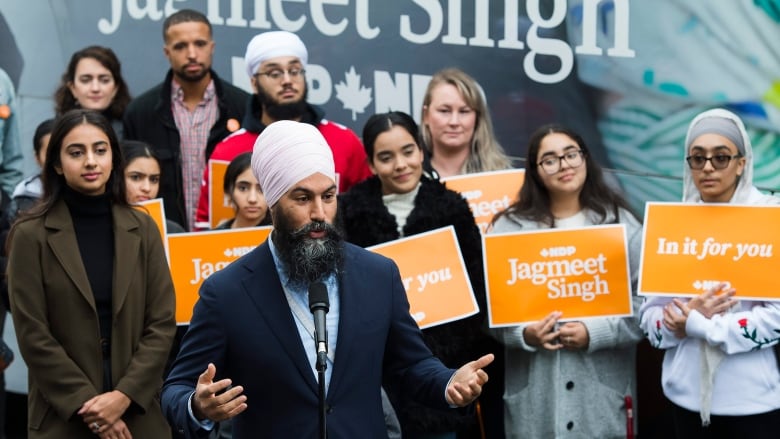 That’s because the NDP is having a bit of a moment. Both the Liberals and Conservatives appear to be losing steam, while the New Democrats have momentum heading into the election campaign’s crucial final week.

The debates have shaken up what was a very placid campaign in the polls. After good performances in the two French-language contests, Yves-François Blanchet is on a roll of his own in Quebec, where the Bloc Québécois has eaten into the Liberals’ lead in the polls and their advantage in the seat count.

But now it seems that Singh’s performance is starting to pay off. The leader who has probably done the most to improve his own personal image in the eyes of voters is now seeing it translate into new support for his party.

The CBC’s Poll Tracker, an aggregation of all publicly available polling data, puts both the Conservatives and the Liberals under 33 per cent support countrywide and locked in the same close race that has prevailed throughout the campaign.

It is looking increasingly unlikely that either party will be able to win enough seats to form a majority government.

The New Democrats have jumped to 16.5 per cent support as of the Oct. 13 update of the Poll Tracker, representing a gain of two percentage points since Oct. 7 and the English-language debate (which, according to several polls, Singh won).

Over the same time span, the Liberals have slipped nearly three points and the Conservatives more than one. Neither the Greens nor the People’s Party have seen the same kind of post-debate bump that the NDP has.

That surge has been particularly obvious in the last few days. Since Oct. 9, the NDP has averaged a gain of 0.7 percentage points per day in the Poll Tracker — a significant increase in an aggregation of multiple polls that is designed to smooth out the swings from individual surveys.

Those polls are unanimous that the NDP has made gains. Ten different pollsters in the field both before and after the English-language debate have recorded a gain of at least one point for the New Democrats, though where the NDP sits in the polls does vary widely. Two pollsters pegged the NDP’s support to still be as low as 13 per cent while two others have put it as high as 20 per cent. MORE