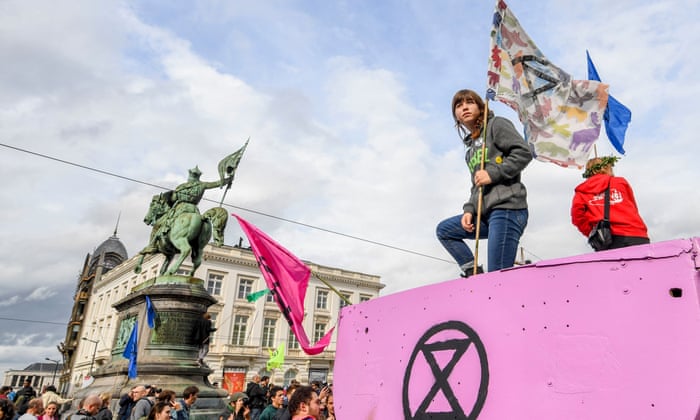 An Extinction Rebellion demonstration in Brussels on Saturday. Photograph: Isopix/REX/Shutterstock

Climate protesters on Saturday intensified efforts to disrupt life in London, and targeted sites including Billingsgate fish market and Shell’s headquarters. They said police took at least 28 of their supporters into custody. That number means that more than 1,200 Extinction Rebellion activists have been arrested in London since their protests, over the government’s “failure” to act over climate change, were launched last Monday.

And those detained include Belgian Princess Esméralda who was taken into a police van for questioning and held for about five hours after she joined a sit-in at Trafalgar Square on Thursday. “The more people from all sections of society protest, the greater the impact will be,” the 63-year-old said. Other protests launched on Saturday included one by more than 50 healthcare professionals – wearing scrubs and singing the Extinction Rebellion anthem – who gathered outside Shell’s headquarters before they marched to Parliament Square. “We are meeting outside Shell because they are one of the biggest companies involved in the oil and energy industry, and they have real power to decarbonise that industry,” said Alex Turner, 36, a paediatric and emergency doctor from Bristol. “We are protesting illegal levels of air pollution.”

Julia Simons, 23, a final-year medical student at Cambridge University, said: “Our government has the responsibility to explain [climate science] to its citizens, to understand that if they don’t act radically, that future which I’ve been studying for won’t exist.” Hundreds of protesters remained camped in Trafalgar Square, where police were continuing efforts to remove them and the roadblock they had set up in Westminster.

Similar protests took place in many other countries. Dutch police arrested 130 activists in Amsterdam after they blocked a bridge in the centre of the city. Some protesters slumped on hammocks hung from pillars supporting the bridge to prevent boats from passing underneath.

In France, hundreds of activists blocked a route to the national assembly in Paris for several hours but were later dispersed by police. In Brussels, demonstrators occupied the gardens of the royal palace while in Melbourne protesters said they would hold a “spring rebellion” of civil disobedience this week including blocking traffic.

At the same time, a petition calling for non-violent protest to be maintained to ensure action is taken to tackle climate change has been signed by more than 300 scientists and environmentalists. “We have an obligation that extends beyond merely describing and understanding the natural world to taking an active part in helping to protect it,” the petition states. “The scientific community has already tried all conventional methods to draw attention to the crisis. We believe continued governmental inaction over the climate and ecological crisis now justifies peaceful and non-violent protest and direct action, even if this goes beyond the bounds of the current law. We believe it is our moral duty to act now, and we urge other scientists to join us in helping to protect humanity’s only home.”

A former Paralympic cyclist accused of climbing on to the top of a British Airways plane and gluing himself to it appeared in court on Saturday – and denied causing a public nuisance. James Brown, 55, who is visually impaired, is alleged to have climbed on the aircraft at London City airport on Thursday during the Extinction Rebellion protests. He appeared at Westminster magistrates court where a not-guilty plea was entered on his behalf by his solicitor Raj Chada.

District judge John Zani granted Brown conditional bail, prohibiting him from going within one mile of any airport in the UK.

Brown – who participated in five Paralympic Games and won two gold medals and a bronze – told reporters he was “relieved” to be out of custody. “I am not denying what I did, but I was compelled to do what I did because of my concerns for the future of my children,” he added.

The protest at Billingsgate, the UK’s largest inland fish market, by Extinction Rebellion’s animal rebellion chapter began early on Saturday when protesters blocked the entrance. One demonstrator locked herself to the gate. Police initially tried to prevent the protesters from reaching the market but relented after negotiations, the group said.

“At London’s Billingsgate market, thousands of fish, stolen daily from their ocean homes, lie dead or dying,” said Kerri Waters, a spokesperson for Animal Rebellion. “Many will have suffocated slowly when pulled aboard fishing vessels, while thousands of others remain alive as they’re transported by lorry to the market, where they’ll be gutted or boiled alive.” SOURCE