Why our economic model fails to explain how we got here on climate. 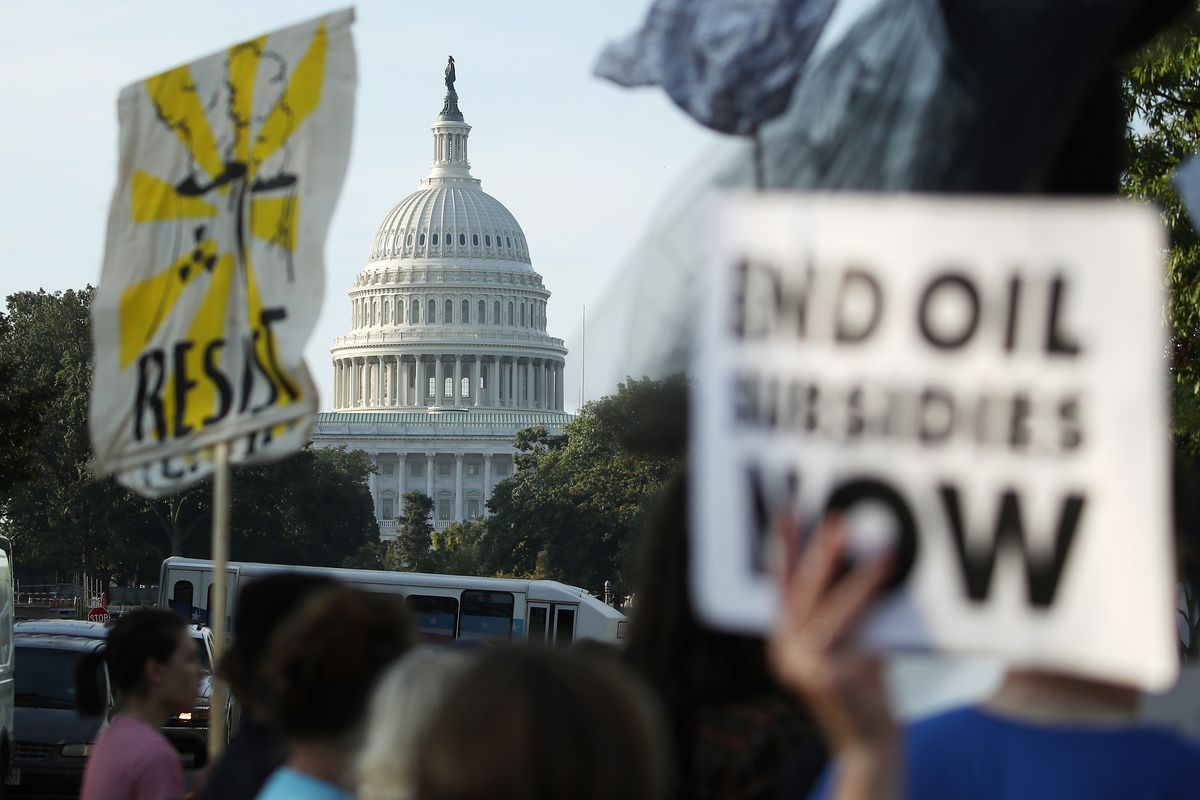 Climate change protesters block traffic during a protest to shut down DC on September 23, 2019, in Washington, DC.  Mark Wilson/Getty Images

The first intro-to-economics class often starts with the question: why are diamonds expensive and water cheap? After all, we need the latter to survive.

The answer, of course, is scarcity, a concept at the core of economics. Diamonds are rare and water literally falls from the sky. Were there no scarcity, we wouldn’t need economics. But given that scarcity exists, we have a price system to signal the economic value of stuff — how much of it there is and how badly we want it.

And yet, there’s a key area where prices fail us every day. They fail us every time you fill up your gas tank: Fossil fuels are severely underpriced.

What do I mean by that? I mean that fossil fuels are imposing costs on our environment, our economy, and our future that are not being captured by their price.

That underpricing has consequences. Energy costs are so low and so unresponsive to the environmental challenge we face that they send us a signal to literally keep cruising along, ignoring the pressing reality of climate change.

How is it that a discipline fundamentally based on scarcity has failed to accurately price in the damage we’re doing to our most important, scarce resource: the environment? Naomi Klein writes that the climate crisis is “born of the central fiction on which our economic model is based: that nature is limitless.”

But I don’t think the economic model fails because it denies scarcity and embraces limitless nature. It fails because of its interaction with two things in particular: 1) our tendency to focus on the present at the expense of the future; and 2) the toxic cycle of profit and influence that distorts policy making and blocks the accurate pricing of carbon.

This diagnosis matters because we need to either unjam the model and attach a sustainable price on carbon or recognize that politics as currently practiced won’t allow us to do that, in which case we’ll need to figure out other, bolder ways to fight climate change. The Green New Deal may well play a role in that alternative vision.

When price sends the wrong signal

One can’t overestimate the centrality of price signaling in market economics. The work of two of the most towering figures in the field — Friedrich Hayek and Milton Friedman — was largely premised on respecting the information in market-formed price signals and critiquing government actions that allegedly distorted such signals. In this framework, minimum wages, for example, are a huge problem as they distort/inflate the price of low-wage labor. Taxes on wages or capital similarly distort behaviors to work and invest.

But the real world shows the theory has often been found wanting. There are literally hundreds of places, both here and abroad, where minimum wages appear to have little distortionary effects on labor markets. Most recently, Trump’s big tax cut for the rich hasn’t led to anything close to the investment boom its proponents promised. To be sure, most card-carrying economists, myself included, still believe prices convey useful information. It’s just that a ton of empirical research reveals that life is a lot more complicated than the simple theory suggests.

When it comes to the environment in general and fossil fuels in particular, the price system isn’t merely failing to work. It’s sending wrong signals, and fatefully so. This is not because fossil fuels themselves are scarce. It’s because their price fails to reflect their contribution to global warming. One recent study put the gap between what fossil fuels (not just gas, of course) do cost and what they should cost, given the environmental damage they inflict, at over $5 trillion, or more than 6 percent of global GDP, per year.

Over the last decade, energy costs grew on an annual basis at a mere 1.4 percent, a touch slower than overall prices, which were up 1.5 percent per year. Last month, the average price of a gallon of gas was $2.59; 10 years prior, in September 2009, that price — in nominal terms — was an almost identical $2.55.

How can that be? Given the increasing awareness of the urgency of climate change over the past 10 years, fossil fuel costs should be higher and they should be growing faster than overall prices, signaling their contribution to global warming.

Why is the price system failing so miserably in such an important facet of our lives and our children’s lives?

One hint to the answer is embedded in that phrase: “our children.” Whenever you hear a plea made on behalf of a future concern — or, in the case of climate, a present concern that is expected to worsen as time proceeds — recognize that you’re bumping up hard against our unfortunate bias toward the present.

In some ways, discounting the future makes sense. A dollar a year from now will have less buying power than a dollar today because of inflation.

That’s how too many of us appear to think about the future of the environment. And by so doing, we’re unmotivated to spend more now to stave off destruction later, a preference expressed in the resistance of policy makers and elected officials to enact policies to fight climate change.

Sixteen-year-old Greta Thunberg put not too fine a point on this shortcoming in her speech to the United Nations last month: “We are in the beginning of a mass extinction, and all you can talk about is money and fairy tales of eternal economic growth. How dare you!”

Those “fairy tales” to which Thunberg refers are often told by long-term economic projections that typically leave out the costs of climate change. MORE