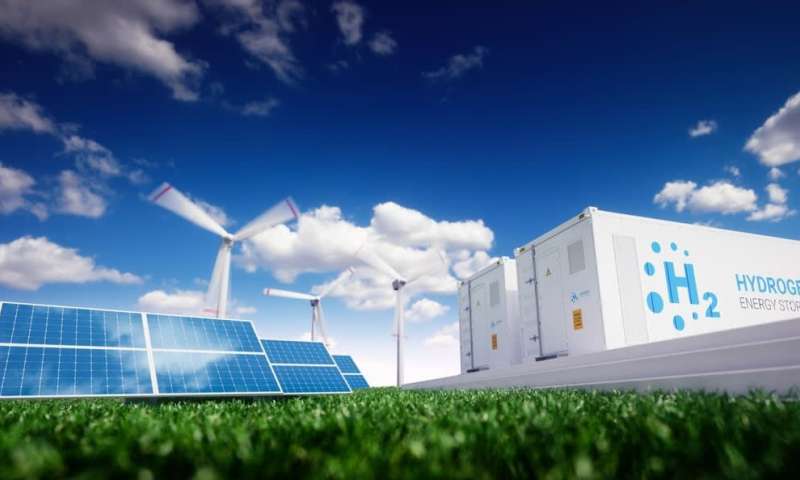 Hydrogen gas is the perfect green fuel—it can be extracted from water and is non-polluting. But although hydrogen is the most abundant element in the universe, it doesn’t naturally occur in large quantities as a gas on Earth.

Hydrogen gas is the perfect green fuel—it can be extracted from water and is non-polluting. But although hydrogen is the most abundant element in the universe, it doesn’t naturally occur in large quantities as a gas on Earth.

Until recently, the cost of electricity has been a roadblock to producing industrial quantities of hydrogen gas through electrolysis. But low-cost renewable electricity technologies have removed this barrier.

Another obstacle is that efficiently splitting water into hydrogen and oxygen gases has required rare and expensive metal catalysts such as platinum and iridium. Iridium is one of the rarest and most costly elements on Earth—it’s often carried here by meteorites. And even the most stable iridium-based catalysts can only withstand electrolysis for a short time.

“If you increase the temperature while running water electrolysis, the iridium-based catalyst will dissolve and you lose it,” explains Dr. Alexandr Simonov from the Monash School of Chemistry. “This is the worst thing that can happen, to dissolve something that costs hundreds of dollars per gram. It can also go into other components of your electrolytic device, contaminating them and preventing them from proper operation.”

Dr. Simonov and members of his research team, including Dr. Manjunath Chatti and James Gardiner, have made a discovery with enormous potential to solve the instability problem, making hydrogen generation by water electrolysis more economically viable.

“We’re replacing iridium with elements that are abundant, cheap, and operate in a more stable manner,” Dr. Simonov says. “We’ve demonstrated their stability in very strongly acidic conditions and up to 80°C, which is an industrially relevant temperature. We achieved absolutely no degradation.”

Dr. Simonov describes the system he’s developing with his team as “self-healing.” Because all metals—even iridium—dissolve during electrolysis, the researchers wondered if the dissolved material could be redeposited on the electrode during operation.

“It turned out that it can,” he says. “We’ve produced a highly active electrode surface based on abundant metals that is sustaining industrially relevant rates of water splitting.” The high temperature and the strongly acidic environment “makes our most recent work different from pretty much everyone in the scientific world, and brings us closer to industry application,” he says.