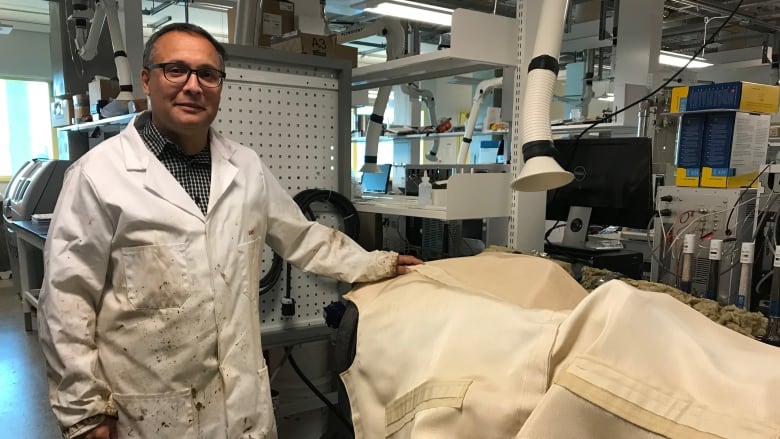 Ian Gates, shown in his lab at the Schulich School of Engineering at the University of Calgary, is working on a way to extract hydrogen gas from oil and bitumen. (Tony Seskus/CBC)

As the world reaches for cleaner energy, hydrogen has long been viewed with a lot of hope.

Often called the fuel of the future, the gas can be used to generate electricity and power vehicles. It produces water — not carbon — when burned.

But among its challenges is the economics of producing the gas in a large-scale and environmentally friendly way. One of the least expensive methods for doing so, for example, using methane, has drawn scrutiny for its carbon emissions.

Now, engineers in Alberta believe they could have an answer — a method capable of extracting hydrogen from underground resources like oilsands deposits while leaving the carbon emissions it produces below the surface.

The team turned heads with their work this summer at the Goldschmidt Geochemistry Conference in Barcelona, making headlines from Britain to Japan. 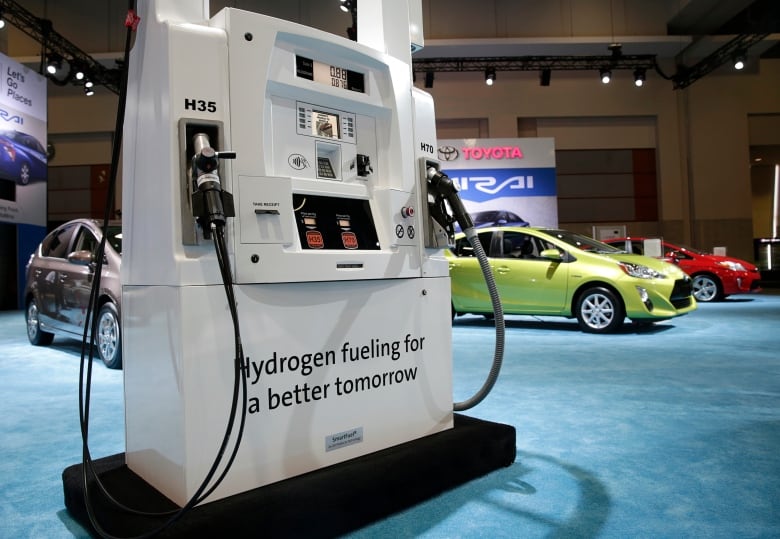 A hydrogen dispensing pump is seen at the Washington Auto Show in 2015. Hydrogen is a potential fuel for the transportation sector.(Reuters)

Hydrogen can be found in many different organic compounds, including hydrocarbons like oil and gas.

One of the most common ways of producing hydrogen from natural gas is called steam-methane reforming, which uses methane and very hot steam under pressure to create a chemical reaction freeing the hydrogen and capturing it in special filters. The waste emissions are carbon dioxide and carbon monoxide.

“That’s been an industrial technology for over 80 [years],” said Grant Strem, CEO of Proton Technologies, the private company commercializing the new process for creating hydrogen.

“What we’re doing is very similar, but the big difference is, we’re using the ground as a reaction vessel, so our capital cost is a lot lower, and instead of buying natural gas to fuel it, we use the unswept oil in the reservoir as our fuel.”

How the process works

Through lab work and small-scale field testing, the researchers say they found injecting oxygen into the fields raises the temperature and creates a reaction that frees the hydrogen.

“You can envision that the reservoir is simply a hot, bubbling mix of oil, which some fraction of it is now combusting,” said professor Ian Gates, from his lab at the University of Calgary’s Schulich School of Engineering.

“And as it is doing so, it simply keeps producing more and more hydrogen as a consequence of its reactions.”

Gates said palladium alloy filters then allow the hydrogen to come to surface while filtering out the other gases, like carbon dioxide or hydrogen sulfide, which stay below ground.

Conceptually, Gates said, the oil in the reservoir could later be produced.

But the expectation is the process can draw up “huge” quantities of hydrogen relatively inexpensively.

And Canada would be able to tap its resources.

“There’s a lot of work toward renewables, hydro and all those other things, but you still have a huge amount of assets, chemical energy, stored in oil,” Gates said.

“What this is about is how do we make use of oil reservoirs — or even gas reservoirs — and get pure, clean energy out of it.”

Gates said after proving the concept in the field last year, they will soon begin testing to see how it works on a larger scale. A semi-commercial pilot project is in the works for next year. MORE