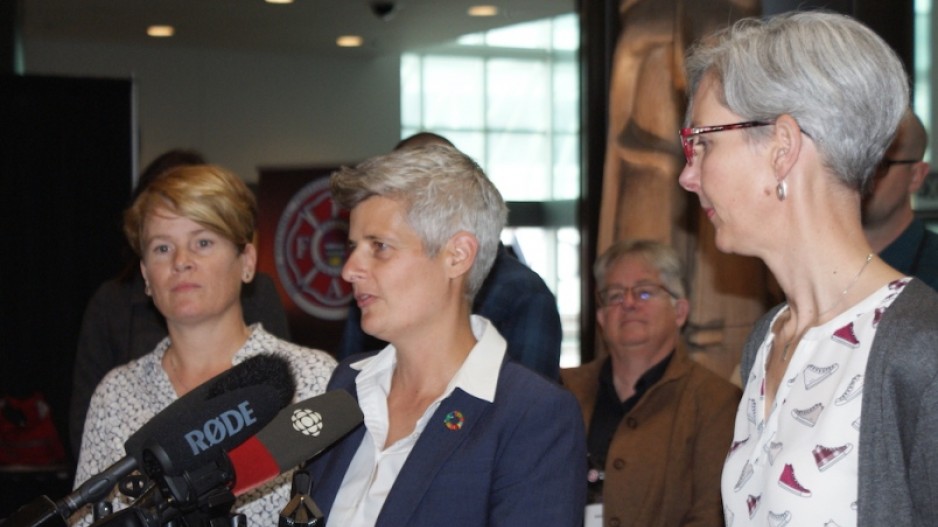 Victoria Mayor Lisa Helps, centre, says the city will see leave to have the Supreme Court of Canada hear an appeal of a B.C. Court ruling that overturned a local bylaw prohibiting the use of single-use plastic bags. She is supported by Tofino Mayor Josie Osborne, left, and Squamish Mayor Karen Elliott at an announcement in Vancouver on Wednesday, Sept. 25, 2019 | Photo: Jeremy Hainsworth, Glacier Media

The fight over Victoria’s ban on single-use plastic bags is going all the way to the Supreme Court of Canada.

Mayor Lisa Helps confirmed Wednesday that Victoria will seek leave to appeal a lower court decision that struck down the city’s bylaw in July.

“The fundamental bottom line is that this is more than about plastic bags,” she said. “The decision, if allowed to stand, could potentially, substantially challenge the authority of local governments to make decisions in line with our communities.”

Under the bylaw, businesses were barred from providing customers with single-use plastic bags and instead had to charge 15 cents for a paper bag or $1 for a reusable bag.

The Canadian Plastic Bag Association, which represents manufacturers and distributors of plastic shopping bags, launched a court challenge before the bylaw took effect in July 2018.

Victoria won in B.C. Supreme Court, but lost at the B.C. Court of Appeal, which found that the primary purpose of Victoria’s bylaw was to protect the natural environment rather than to regulate business. As such, the city should have sought provincial approval for the bylaw, but failed to do so, the court said.

Helps said Victoria fundamentally disagrees with the ruling and will argue that it runs contrary to the principle that “lawmaking and implementation are often best achieved at the level of government that’s closest to the citizens affected.”

Helps said the principle was previously mentioned by the Supreme Court of Canada and will form the basis for the city’s appeal.

She cautioned, however, that the Supreme Court only hears about 10 per cent of cases that seek leave to appeal.

“So it’s a long shot, but we think it’s an important enough issue for municipalities across this country.”

The Canadian Plastic Bag Association said in a statement that it’s considering all options in consultation with legal counsel and will comment in due course.

Helps announced the appeal at the Union of B.C. Municipalities convention in Vancouver. She was accompanied by Tofino Mayor Josie Osborne, Squamish Mayor Karen Elliott and other municipal officials.

Osborne, whose community recently passed its own ban on single-use plastic bags and straws, thanked Helps and Victoria council for their work on the issue.

“I’m really happy to see the kind of leadership from a city like Victoria, because small municipalities like Tofino and others simply don’t have deep pockets to be able to afford legal cases like these,” she said.

Elliott added that the Court of Appeal ruling strikes at the heart of local government’s power to regulate business practices.

“Local governments are part of the solution and we want the ability to reflect our communities’ values and long-term goals in our bylaws and regulations without having to ask permission,” she said.

Victoria is pursuing the appeal even as the federal and provincial governments contemplate their own bans on single-use plastics.

The province is currently getting public feedback on the issue, while the federal government announced in June that it will ban plastic bags and other items as early as 2021.

Helps acknowledged those efforts, but said the city felt the Court of Appeal decision had too many other implications to let it stand.

“So that’s why we’re seeking leave to appeal, but absolutely working with the province at the same time.”

She said the remarkable thing about Victoria is that since the bylaw was struck down, up to 97 per cent of businesses are still operating as if the bylaw was in place. “So there’s clearly social licence and there’s also political will,” she said.

The appeal will be handled by the city’s in-house legal counsel without the need to hire outside lawyers, Helps said. SOURCE