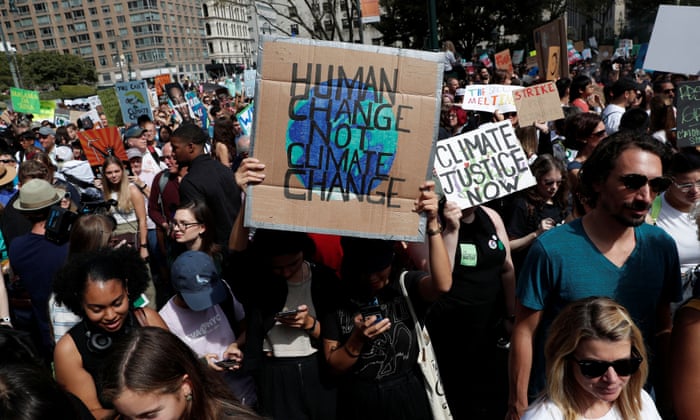 More than a quarter million people marched in New York for their future on Friday, many of them children. Photo: Sue Brisk.

They put the number at 300,000 — but who knows? The important thing wasn’t the number. A new generation made an unforgettable coming out. Later in the day, after returning home possessed with an ecstatic kind of exhaustion, we read about the rallies in 185 countries, an unprecedented uprising everywhere on Earth — for the Earth.

We were invited to march with the indigenous leaders from Amazonia.  They were in town for the United Nations General Assembly, as were representatives of 193 countries, and Greta Thunberg. Of all the institutions of our civilization, it is the UN that has kept up the call of our emergency, with the assessment reports of the Intergovernmental Panel on Climate Change (commonly called the IPCC reports). The timing of it all grew the drama, starting with Thunberg’s arrival like a Charles Lindbergh in reverse, sailing on a carbon-free boat from Europe.

The climate movement has had its leaders, but now in retrospect, they look like a pack of John the Baptists waiting for Greta Thunberg. Her spectral presence is indispensable. Hero-worship seems not the right idea for an uprising for the Earth. We have the vague feeling that the haranguing of Naomi Klein and Bill McKibbon and Rebecca Solnit and David Attenborough were necessary as educators, but inspiring a mass movement among the consumerized public was not something they could accomplish.

Our previous big protest was in 2014 with the People’s Climate March (PCM).  Snaking through the iconic buildings of Midtown, New York, it had its radical shadow event the following day, Flood Wall Street.  The flood will always be remembered for the image of the hand-cuffed man in the surprisingly realistic-looking polar bear suit. (Inside was Peter Galvin from the Center for Biological Diversity).  The mainstream PCM event had numbers comparable to this weekend’s strike, although it didn’t have the aura of the worldwide uprising of the children’s strike.

This event was of, for, and by the children, and their hero childlike in aspect, although Thunberg’s voice has an ageless quality,  formidable, coldly scolding dithering business leaders and politicians.) The strike seemed to combine the radical nature of the Flood Wall Street occupation with the larger mass protest. The whole thing lacked the participation of institutions and famous people. And it makes us wonder if the big institutions and big names inhibit mass action, even as they labor with their radical gestures to inspire our revolutionary emotions.

The People’s Climate March of 2014 featured glossy advertisements on the walls of subway trains. Today that would inspire comments on the carbon-heavy advertising industry and its zombifying impact on people.  The emergency of our moment goes all the way to the edges. It is easier now to ask about the carbon-emitting that comes from very ordinary domestic living, not just driving and flying.

Thunberg is standing there quietly thundering with all the storms and wildfires. I wonder what the Big Oil and their banking enablers are thinking after that worldwide outpouring.  The Green New Deal must look like an inevitable FDR avalanche of change. Chase Bank’s Jamie Dimon must be taking another look at Greta Thunberg, this braided school girl from Sweden. He makes a $100,000 a day and puts CO2 into the air from every continent with his investments. For the change to be enough to bring back the birds and the frogs and to reassure these angry children, Wall Street will have to be flooded for real. The next step is very close to our shoes. SOURCE