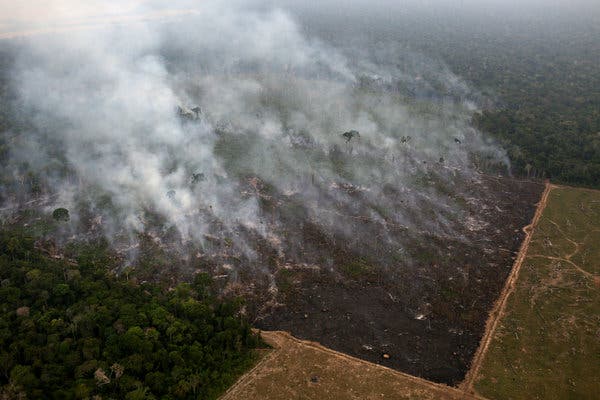 Fires in the Amazon in Brazil this week. Credit: Bruno Kelly/Reuters

UNITED NATIONS — This is the world we live in: Punishing heat waves, catastrophic floods, huge fires and climate conditions so uncertain that children took to the streets en masse in global protests to demand action.

But this is also the world we live in: A pantheon of world leaders who have deep ties to the industries that are the biggest sources of planet-warming emissions, are hostile to protests, or use climate science denial to score political points.

That stark contrast comes at a time when governments face a challenge of a kind they have not seen since the beginning of the industrial era. In order to avert the worst effects of climate change, they must rebuild the engine of the global economy — to quickly get out of fossil fuels, the energy source that the system is based upon — because they failed to take steps decades ago when scientists warned they should.

On Monday, at the United Nations Climate Action Summit, comes a glimpse of how far presidents and prime ministers are willing to go. The United Nations secretary general, António Guterres, expects around 60 countries to announce what he called new “concrete” plans to reduce emissions and help the world’s most vulnerable cope with the fallout from global warming.

The problem is, the protesters in the streets and some of the diplomats in the General Assembly hall are living in separate worlds.

“Our political climate is not friendly to this discussion at this moment,” said Alice Hill, who specializes in climate policy at the Council on Foreign Relations. “Multilateralism is under attack. We have seen the rise of authoritarian governments.”

“We see these pressures as working against us,” she said. “We don’t have leadership in the United States to help guide the process.”

President Trump, in fact, has rolled back dozens of environmental regulations, most recently reversing rules on auto emissions, saying that they were an unnecessary burden on the American economy. In Brazil, Jair Bolsonaro wants to open the Amazon to new commercial activity. In Russia, Vladimir Putin presides over a vast, powerful petro-state. China’s state-owned companies are pushing for coal projects at home and abroad, even as the country tries in other ways to tamp down emissions. Narendra Modi of India is set on expanding coal too, even as he champions solar power.

The latest report by a United Nations-backed scientific panel, meanwhile, projected that if emissions continue to rise at their current pace, by 2040, the world could face inundated coastlines, intensifying droughts and food insecurity. Basically, a catastrophe. 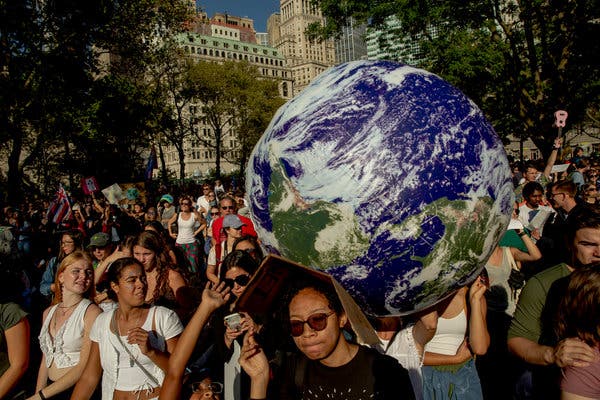 Protesters in Manhattan on Friday. Credit: Mark Abramson for The New York Times

At a press briefing ahead of the Monday summit, Mr. Guterres was bullish on what he described as a new willingness by governments and companies to address climate change seriously. He said he hoped “a very meaningful number of countries” would declare their aim to reduce carbon emissions significantly and aim to be carbon-neutral by 2050. MORE