Greta Thunberg and her Extinction Rebellion peers remind us that activism is not just about lobbying for change, but doing it ourselves 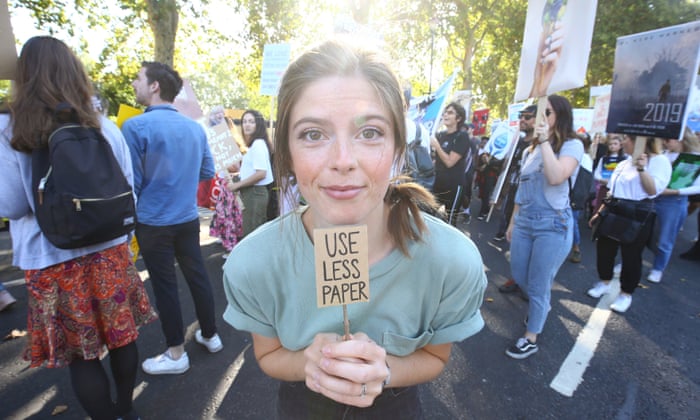 There is a celebrated line in Jared Diamond’s Collapse: How Societies Choose to Fail or Survive, his bestselling study of ecocide and sudden social implosion. Referring to the “self-inflicted environmental damage” on Easter Island by deforestation, Diamond asked: “What did the Easter islander who cut down the last palm tree say while he was doing it?”

While there has been much academic controversy about the accuracy of his shorthand for what happened on Easter Island, what remains, however, is a powerful and affecting metaphor, one ever more resonant in the midst of the escalating global climate emergency.

The question “What on earth are we thinking?” is, today, no longer an experiment in supposition. We can see the shape of the calamity and measure our responses and the hypocrisies and contradictions inherent in them. Confronted by a climate emergency on a vast scale, and with the widespread failure of our political leaders, we continue to behave as if someone else – anyone else – will solve the problem, rather than tackling it ourselves.

So we worry. And we continue to consume. And sometimes we consume as a way of escaping the worry of consuming – even as we struggle to step back and see the wider, and blindingly obvious, picture.

It is a cycle that has placed a well-founded sense of anxiety about humankind’s future, perhaps not experienced so viscerally since the depths of the cold war and the fear of nuclear annihilation, against a profound sense of powerlessness. Solutions can seem beyond our reach as individuals and, if solvable at all, are in the hands of governments.

There are, then, deep and pressing reasons to be desperately worried. But there are also reasons for optimism. Alongside a wider democratic crisis, last week’s climate strike – and the wider Extinction Rebellion represented by figures such as the teenage climate campaigner Greta Thunberg – exists as a potent reminder that activism is not simply about lobbying the seats of power but about our power. As individuals, we can shape the culture, societies and politics we live in and drive them towards better results.

In the heat of political debate, we forget sometimes the importance of individual acts

While it is easy to be cynical about the impact of protest in an age of populism, where politicians seem determined to find ways to become ever less accountable, the global reach and scale of last week’s strike suggest a shifting of public opinion. Where once events such as Climate Camp could attract a few thousands, mainly committed activists, the climate strike has attracted vast numbers across the world, many of them protesting for the first time. If we need leaders such as Thunberg, it is as a reminder of the importance not only of organised action but of what we can and should do for ourselves….

Some reject the notion that individual action – recycling or changing how much meat we eat or how we travel – is a sufficient response to the sheer scale of the problem confronting the planet. But this misses a key point about how we live our lives. In the heat of political debate, we forget sometimes the importance of individual acts. What we put in our breakfast bowl, small issue as it is, became – for me at least – something that made me think about the sustainability and provenance of what I ate when a friend pointed out that huge amounts of water are used to produce my once favourite almond milk.  MORE