The climate strike must be a beginning and not an end. Warming won’t be stopped by symbolism 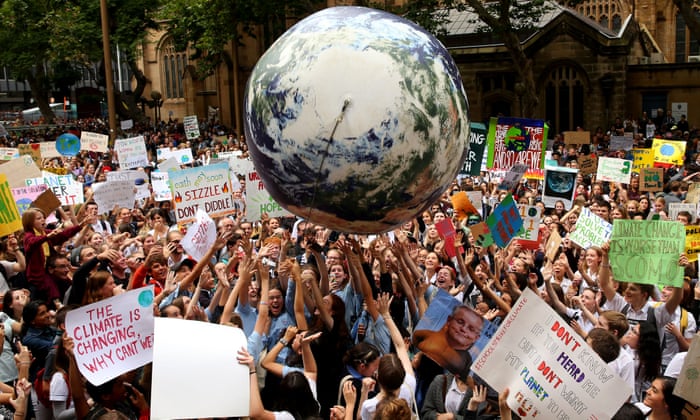 ‘Schoolchildren have spurred a movement that’s growing in almost every nation. If they can do that, what else could be possible?’ Photograph: Don Arnold/Getty Images

During the carnage of the first world war, the poet Wilfred Owen revisited the biblical story in which God tests Abraham by commanding the sacrifice of Isaac, his son. In Genesis, Abraham dutifully prepares the lad for slaughter before God relents and tells him to offer a ram instead.

But the old man would not so, but slew his son,

And half the seed of Europe, one by one.

The parable illustrates global warming just as well as war – except, with CO2 levels higher than at any other time in human history, it’s a planet rather than a continent now under the knife.

That’s what makes the climate strike so fitting: an international rebellion led by the young against generations of betrayal. We know that, as far back as the late 50s, researchers for the oil industry understood the effects of carbon on the atmosphere but did nothing about it.

In 1988 George HW Bush promised on the campaign trail to fight climate change. “I am an environmentalist,” he declared. “Those who think we are powerless to do anything about the greenhouse effect are forgetting about the White House effect.”

There was, of course, no White House effect.

In 1997 the world’s leaders signed the Kyoto protocol, with Bill Clinton declaring “a commitment from our generation to act in the interests of future generations”. More emissions have been released since that agreement than in all of previous history.

How petty, how small, how childish do those politicians with the temerity to attack Greta Thunberg look! She speaks for science, idealism and hope; they embody an ignorance or cynicism so deep as to constitute depravity.

The ecological disaster that confronts us today extends way beyond climate. Some scientists speak of the “sixth extinction event” – but, as Justin McBrien argued, that phrase isn’t accurate.

We might less euphemistically discuss a “first extermination event”. Nature is not dying so much as being killed, by people who know perfectly well what they’re doing.

The need for protests could not be more urgent – and, at last, they’re happening. The global strike provides a perfect antidote to the despair so many of us have felt for so long.

There’s a nightmarishness to the isolated experience of climate change: a sense of paralysis and horror at a world sleepwalking into disaster. By coming together on the streets, we shake that off, and we grasp something of our collective strength. MORE