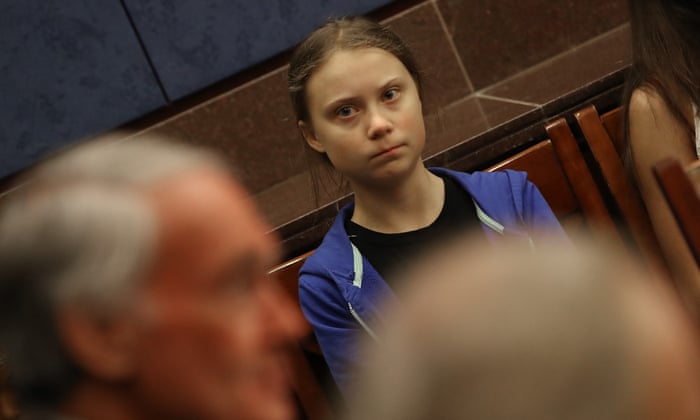 At a meeting of the Senate climate crisis task force on Tuesday, lawmakers praised a group of young activists for their leadership, their gumption and their display of wisdom far beyond their years. They then asked the teens for advice on how Congress might combat one of the most urgent and politically contentious threats confronting world leaders: climate change.

Greta Thunberg, the 16-year-old Swedish activist who has galvanized young people across the world to strike for more action to combat the impact of global warming, politely reminded them that she was a student, not a scientist – or a senator.

“Please save your praise. We don’t want it,” she said. “Don’t invite us here to just tell us how inspiring we are without actually doing anything about it because it doesn’t lead to anything.

“If you want advice for what you should do, invite scientists, ask scientists for their expertise. We don’t want to be heard. We want the science to be heard.”

In remarks meant for Congress as a whole, she said: “I know you are trying but just not hard enough. Sorry.”

The audience laughed. Supporters broke into applause. Senator Ed Markey, the Massachusetts Democrat who co-sponsored the Green New Deal and leads the Senate task force, was perhaps surprised by her bluntness. But he smiled.

Seated at the table with the teens were some of the most sympathetic and vocal supporters of bold action on climate change in Congress. But facing a Republican-controlled Senate and a hostile White House, the prospect of enacting reforms at the scale and scope called for by activists – and many scientists – is bleak. MORE