“We risk losing credibility with an entire generation of students if we cannot take action in support of the defining cause of their generation.”

Highlighting an open letter now co-signed by 175 teachers that urges educators around the world to cancel classes and join the global climate strike scheduled for Sept. 20, two of the original signatories published an op-ed in The Guardian Friday explaining why striking “in the name of climate justice is a resounding endorsement of learning.”

“We educators need to help strengthen the climate movement, and the start of this school year is an important moment.”
—Jonathan Isham and Lee Smithey, U.S. professors

In the op-ed, Jonathan Isham of Middlebury College and Lee Smithey of Swarthmore College acknowledge the lessons they have learned about the human-caused climate emergency from their own students, youth leaders like Swedish teen climate activist Greta Thunberg, and the millions of people who have participated in Fridays for Future demonstrations across the globe.

“No educator is able to join Greta Thunberg as she continues her bold Atlantic crossing, but all of us can follow her lead,” they write, referencing the 16-year-old’s recent trip to the United States via an emissions-free vessel. “We risk losing credibility with an entire generation of students if we cannot take action in support of the defining cause of their generation.”

The professors note that “some educators—and their bosses—might object to striking,” and outline a few reasons why that may be the case. However, they argue, “to strike in the name of climate justice is a resounding endorsement of learning: it turns out the world’s youth have been listening to their teachers all along. They understand the science of climate disruption; they take in the lessons of history; they grapple with the complexity of market forces and the true costs of polluting. In their humanities and social science courses, they hear the voices of those at the margins and then honor their dignity and humanity through the arts.” MORE

The best way to address climate disruption is… burn more fossil fuels? It doesn’t make sense, but that’s what industry, media, and governments want us to believe.

To profit as much as possible from fossil fuels before markets fall under the weight of climate chaos and better alternatives, industry and its allies tell us fracked gas is a climate solution.

A new study shows it’s as bad or worse for the climate than other fossil fuels. Cornell University researchers found alarming increases in atmospheric methane since 2008 can likely be pinned on the U.S. shale oil and gas boom.

Methane is a potent greenhouse gas responsible for one-quarter of current global heating. It only stays in the atmosphere for about 12 years before it breaks down and gets reabsorbed into natural systems, but it causes a lot of damage while it’s there. It traps heat at a rate close to 85 times higher than carbon dioxide over 20 years. CO2 not absorbed by vegetation and oceans—where it causes acidification and other problems—can remain in the atmosphere for thousands of years.

Although some question the Cornell findings, arguing that the methane spike is mainly from biogenic sources, Cornell professor Robert Howarth maintains methane emissions from the (mostly fracked) natural-gas industry are much higher than industry and government report. Research by the David Suzuki Foundation and St. Francis Xavier University found that’s the case in B.C. Other researchers conclude methane emissions are underreported in Alberta.

Howarth argues that because methane from fracked gas, like plant and animal methane, is lighter than gas from other fossil-fuel development, some emissions attributed to biogenic sources likely come from fracking. He concludes that “shale-gas production in North America over the past decade may have contributed more than half of all of the increased [methane] emissions from fossil fuels globally and approximately one-third of the total increased emissions from all sources globally over the past decade.”

According to a Vox article, the U.S. is responsible for 89 percent of shale-gas production, with Canada making up the rest—and the industry is expanding rapidly, thanks in part to political support. MORE

Technology may be crucial to reaching climate targets, but cost remains a challenge 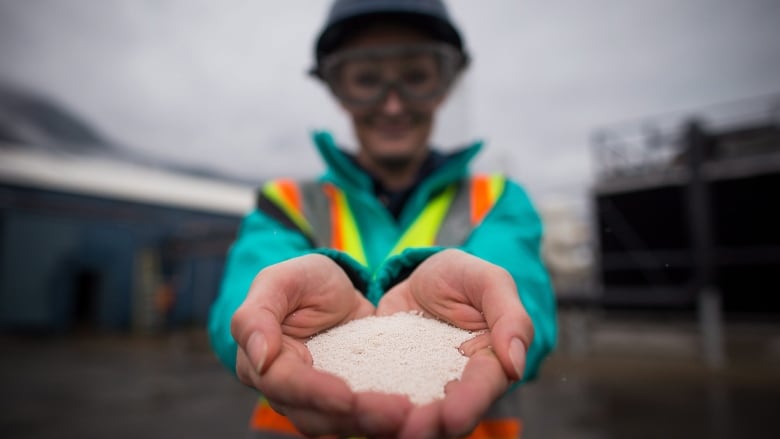 If global warming is caused by too much carbon dioxide being released into the atmosphere by human activities, intercepting those greenhouse gases before they reach the atmosphere — or, better yet, sucking them right out of the sky — sounds like a logical solution.

That’s the promise of carbon capture technologies, one of the few climate change solutions that doesn’t just reduce the amount of carbon emitted, but can actually remove carbon from the atmosphere, thereby generating “negative emissions.”

It may in fact be essential if we are to limit global warming to 1.5 C above pre-industrial times — the more stringent of two targets under the Paris accord that aim to prevent the worst impacts of climate change. Last year’s special reportfrom the Intergovernmental Panel on Climate Change (IPCC) found carbon dioxide removal was needed in every successful scenario to cancel out emissions from sources for which no mitigation measures have been identified — things like long-distance air travel and cement production.

Here’s what you need to know about the technology.

What is carbon capture?

It’s a range of technologies that either:

In both cases, the CO2-containing gases or air are typically absorbed by a solvent or solution, and then separated out again later.

So far, most carbon capture projects around the world have been the former, as carbon dioxide concentrations are much higher coming out of a source like a furnace — CO2 makes up just 0.04 per cent of the air — making it cheaper and easier to extract.

What happens to the carbon after it’s captured?

It can either be:

Most of the projects in Canada so far have been carbon capture and storage, where the carbon dioxide is used to push more oil out of aging oil wells and then stored underground in air pockets in the porous rock of depleted wells, with a “cap stone” on top to prevent leakage. MORE 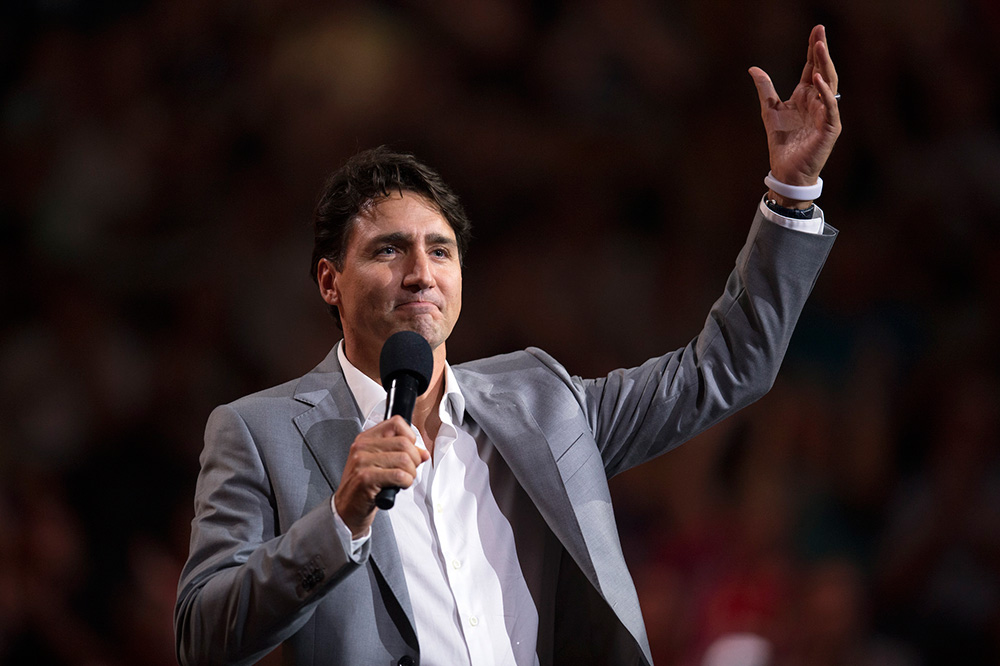 ‘The Liberals effectively act as a kind of shock absorber of discontent and anger towards the elite,’ says Martin Lukacs, a journalist and author of the new book, The Trudeau Formula. Photo by EJ Hersom, Creative Commons license CC BY 2.0.

Talk a good game about transforming society on behalf of the 99 per cent, while secretly assuring the one per cent that they have nothing to worry about.

That’s the political strategy that defines Canada’s Liberal party, according to Martin Lukacs, a long-time investigative journalist and Guardian contributor whose new book The Trudeau Formula is being released this month. Activist and author Naomi Klein calls it “a must-read that brilliantly maps the inner logic of the Trudeau years.”

“The Liberals effectively act as a kind of shock absorber of discontent and anger towards the elite,” he said. In his book, Lukacs describes sneaking into a private fundraising event for the Liberals in Halifax in April 2018. Corporate lobbyists circled federal ministers “like teenagers at a high school dance,” he writes.

Lukacs shared ideas with The Tyee on why Trudeau’s main strength is progressive marketing, how his broken promises are creating an opening for the scapegoating politics of Conservative Leader Andrew Scheer, why the NDP is failing to take advantage of this political moment, and what it will take for ordinary Canadians to create transformative solutions for the climate emergency and extreme inequality….

Ultimately politicians won’t do anything unless their feet are put to the fire by a social movement.

On why a Green New Deal is political kryptonite to Trudeau

A Green New Deal is basically a clear, distinct roadmap to accomplish everything that Trudeau claimed he champions. It makes very clear that we have to learn to say no to opening new fossil fuel frontiers. Which of course is precisely what the Trudeau government has tried to tell Canadians can’t be done. A Green New Deal tells us that we actually have to engage in reparations and land restitution with Indigenous people.

We can’t just offer the spectacle of symbolic gestures. We can no longer offer an incremental approach to something like the climate crisis. We can’t leave it to the market. We actually have to engage in big, ambitious, government-led public solutions. We simply can’t appeal to the powerful. We have to build a movement that takes on that elite class directly.

That’s a frontal challenge to the establishment centrist politics of the Liberal party. And it’s precisely the kind of politics that could massively improve people’s material lives. You’d potentially create hundreds of thousands, if not millions, of good green jobs, unionized jobs. That raises people’s standard of living. That improves the deteriorating public services that we have. That also is the best way to defeat the rise of ugly right-wing scapegoating, which I don’t think the Liberals are capable of doing. If anything, the kind of policies that the Liberal government has put forward are going to feed and pave the way for the right wing to take power. MORE

Unions Should Go Big on a Green New Deal for Canada

On climate change, workers shouldn’t be left behind — they should lead the way. 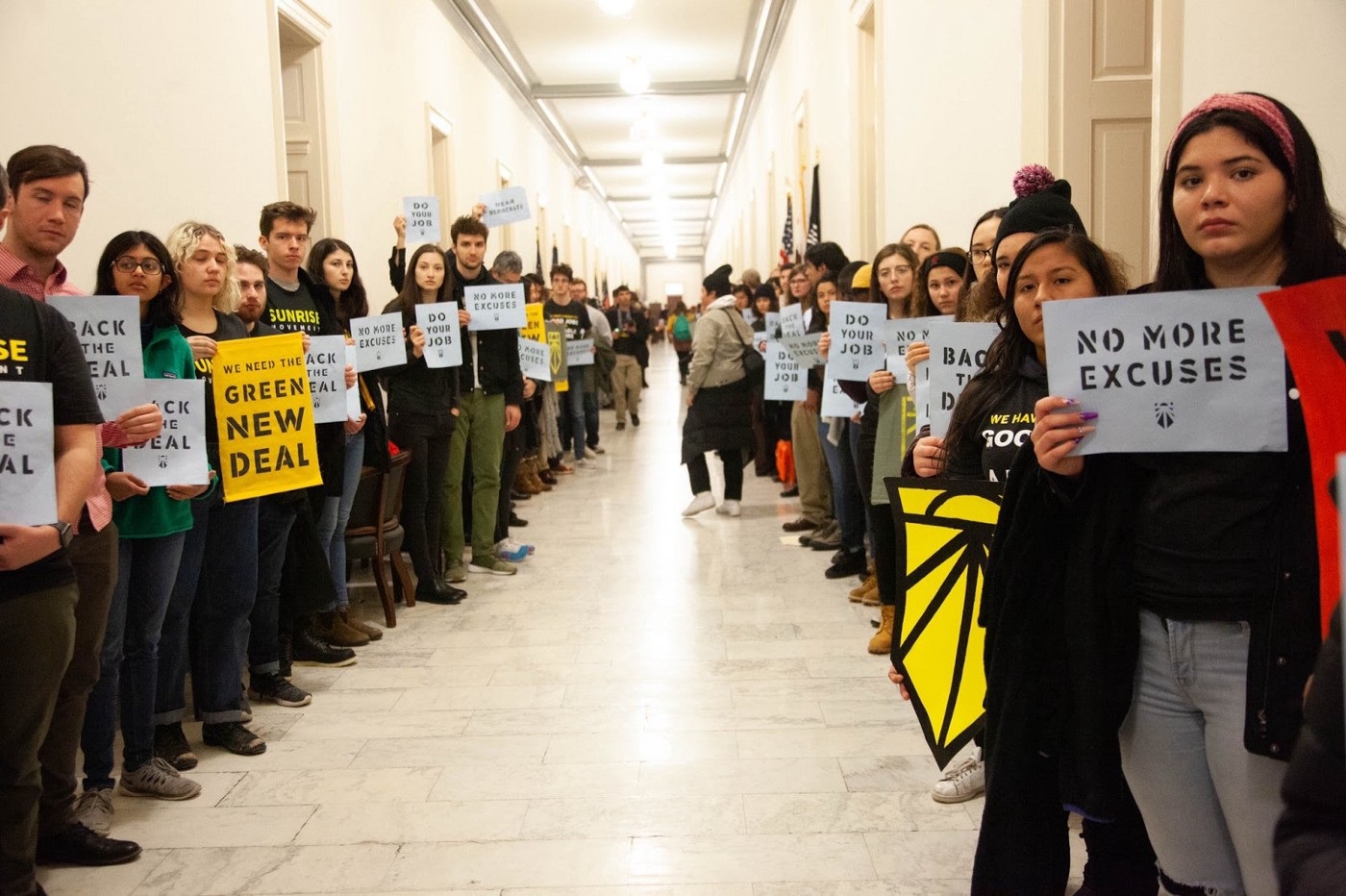 The Green New Deal, catching fire in America, is the kind of policy plan that Canadian unions could loudly champion. Photo via the Sunrise Movement.