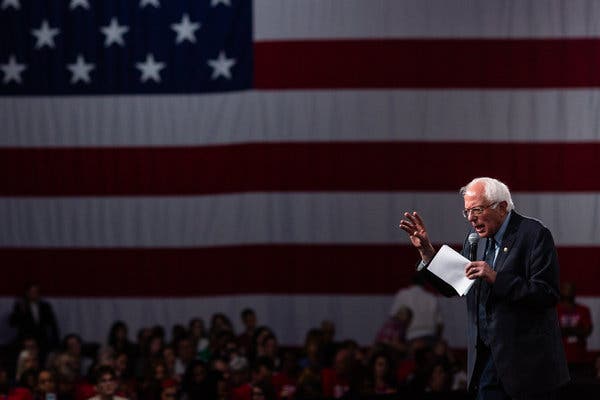 WASHINGTON — Senator Bernie Sanders on Thursday released a $16.3 trillion blueprint to fight climate change, the latest and most expensive proposal from the field of Democratic presidential candidates aimed at reining in planet-warming greenhouse gases.

Mr. Sanders unveiled his proposal one day after Gov. Jay Inslee of Washington, who made climate change the central focus of his campaign, announced he was dropping out of the 2020 race. Mr. Inslee’s absence could create an opening for another presidential aspirant to seize the mantle of “climate candidate.”

Mr. Sanders said in an interview that his proposal would “pay for itself” over 15 years and create 20 million jobs in the process.
“President Trump thinks that climate change is a hoax,” Mr. Sanders said in the interview, laying out the case for his climate plan. “President Trump is dangerously, dangerously wrong. Climate change is an existential threat to the entire country and the entire world and we must be extraordinarily aggressive.”
“I have seven grandchildren, and I’m going to be damned if I’m going to leave them a planet that is unhealthy and uninhabitable,” he added. MORE