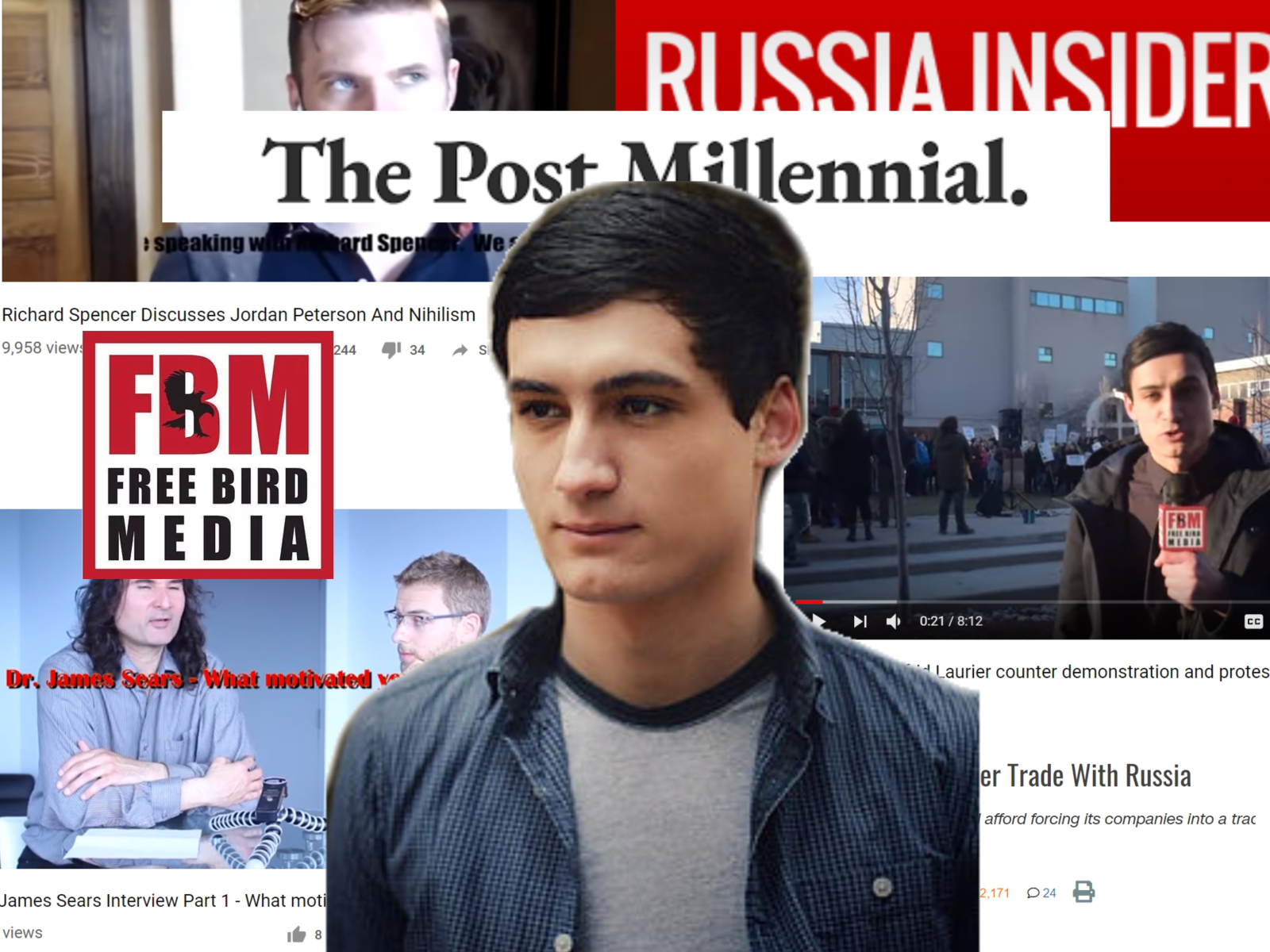 Before Cosmin Dzsurdza worked for The Post Millennial, he worked for a pro-Kremlin site called Russia Insider and a blog that promoted racists. Illustration by Emma McIntosh, photos from Free Bird Media and screenshots

Cosmin Dzsurdzsa is an editor at what has quickly become one of the most widely shared right-wing news websites in Canada.

According to the About Us page on The Post Millennial’s website, the University of Waterloo graduate used to be a “researcher on The Oxford English Dictionary.” The dictionary’s publisher, Oxford University Press, said in an email that it has “no record” of Dzsurdzsa working for the company, but that he appears to have worked on an unaffiliated research project examining the text.

But that short biography leaves out a few steps. Before Dzsurdzsa was hired at the Post Millennial, he also worked for websites that promoted racism and peddled pro-Kremlin content.

While he was a creative director and correspondent at Free Bird Media, the blog promoted Richard Spencer, who has been identified by the Southern Poverty Law Center in the U.S. as a “professional racist” and white supremacist. It did the same for Faith Goldy, who praised white nationalists at the deadly Charlottesville neo-Nazi protest, said a neo-Nazi slogan on a podcast for the neo-Nazi site the Daily Stormer and added that she “doesn’t see that as controversial,” advocated to “return” Canada to a population that is “96 per cent Euro Canadian” and said she wants “launch the next Crusade” to “reclaim Bethlehem.” (Neo-Nazi ideology is driven by a hatred of Jewish people, along with other minority groups and the LGBTQ community, says the Southern Poverty Law Center.)

Free Bird Media also gave a friendly platform to Kevin J. Johnston, who has advocated for physical violence against Muslims and lost a major defamation case for online hate speech directed at a Mississauga restaurateur. The judge in that case said Johnston’s words were a “loathsome example of hate speech at its worst.”

And for Russia Insider, a pro-Kremlin site that BBC and Newsweek have called “propaganda” — “Russia’s Arctic Military Drills Are Truly Massive,” reads one 2015 headline from the site — Dzsurdzsa once advocated for Canada to drop trade sanctions against Russia.

This editor used to work for a site that promoted racists and a Russian propaganda site. Now he works for The Post Millennial, a rising star in Canada’s conservative media scene.

The Post Millennial is seeking a larger presence in Canada’s media ecosystem ahead of the October federal election, planning to build a six-figure video studio and conduct its own polls. Its online following has grown quickly since it was founded in 2017.

But the outlet’s willingness to hire someone with a background working for sites that promoted hate is “disturbing,” said Barbara Perry, director of the Centre on Hate, Bias and Extremism at Ontario Tech University.

“Editors shape the climate and culture of the newsroom,” Perry said. “What does that say in terms of the kinds of stories (Dzsurdzsa is) assigning to whom, or not assigning?”  MORE

You Must Be This Conservative To Ride: The Inside Story of Postmedia’s Right Turn