☢ Please sign our petition to Premier Ford to Cut the Cuts! Ontario can avoid the need to cut spending on public health, education and social programs by reducing electricity costs by $1.9 billion/year just by cancelling the Darlington rebuild and doing a deal with Quebec for low-cost water power instead. 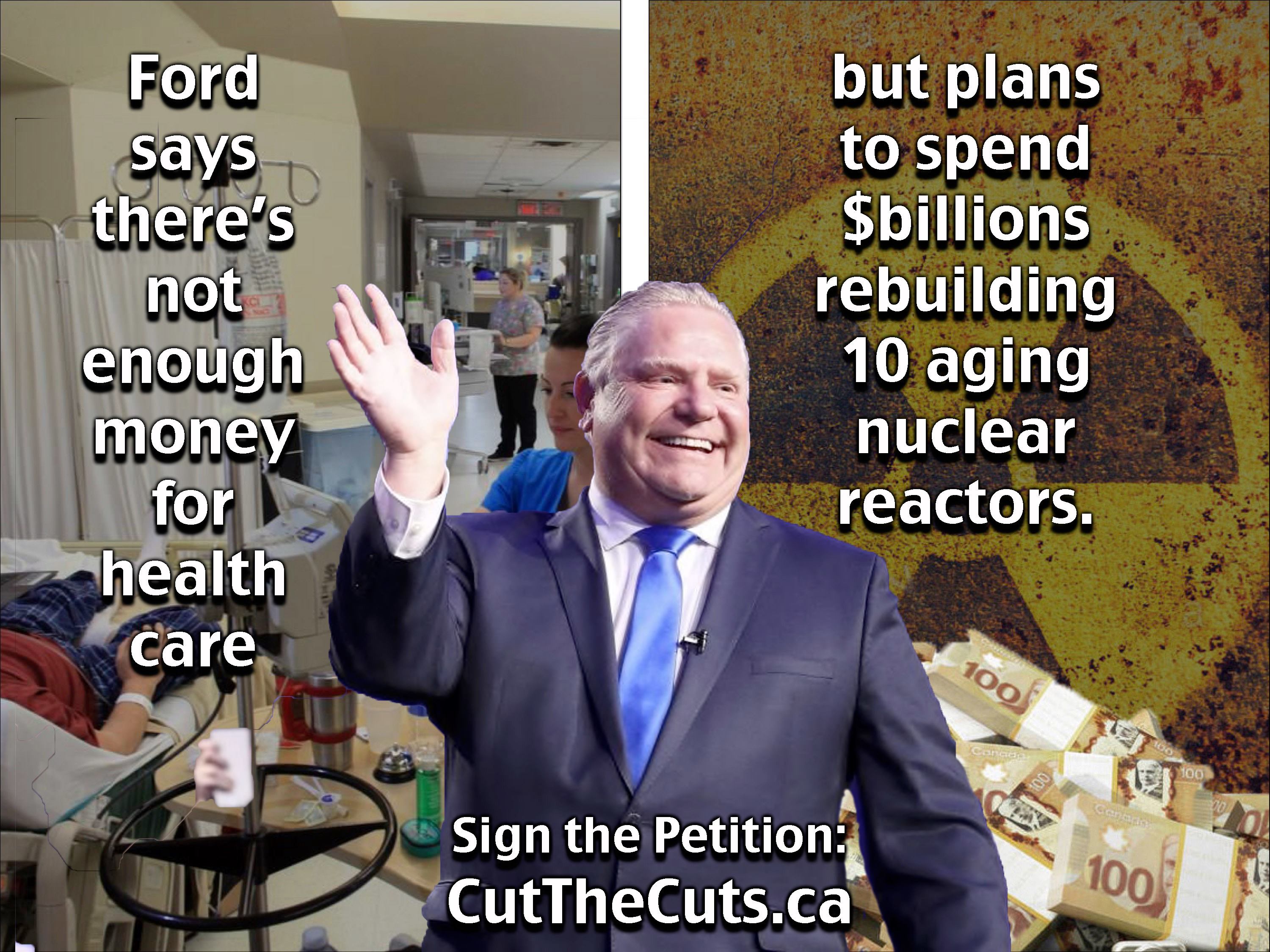 ☢ Radiation Containment A New Concern In Russian Nuclear Incident Rachel Maddow looks at how the story of a nuclear incident in Russia has grown steadily more alarming as new details have emerged. 17 min. video news report.

☢ The Hoax That Nuclear Power Is Green This stellar 28-minute video features clips from several keynote presentations at a New York City conference organized by the Radiation and Public Health Project.

☢ US Nuclear industry push for reduced oversight gaining traction The security changes are jeopardizing public health and safety by restricting the NRC’s ability to ensure that nuclear plants are sufficiently protected against radiological sabotage attacks.

☢ Five myths about the Chernobyl disaster No, wildlife isn’t thriving in the zone around the nuclear accident.

☢ Ohio Passes Controversial Bill to Bail Out Nuclear and Coal Plants while undercutting renewables Consumers will end up paying the $900 M cost to bail out 2 nukes plus 2 coal plants while dropping renewable and efficiency projects. More here.

☢ Nuclear plants’ bankrupt owner spent heavily for bailout The almost $50 million in spending is separate from the $9 million spent on TV and radio ads and mailers by a pro-bailout group.

☢ Victims of Fukushima strengthen call to ban nuclear energy “Both religiously and ethically, we cannot allow nuclear power plants to con’t running. They produce deadly waste, which we have no way of processing into something safe. More than 100,000 years are necessary for the radiation of such deadly waste to diminish to the level that it was in the original uranium.”

☢ No Need for Cuts What happened to that 12% cut in hydro bills that Premier Ford promised more than a year ago? Absolutely nothing. The Ford government has stubbornly stuck with one of the worst decisions of the former government – doubling down on high-cost nuclear power.

☢ Quebec has an offer Ontario can’t refuse – forever Once again, the Ontario government turned up its nose at an offer of low-cost power from its neighbour. Despite failing to make any progress on his promise to reduce electricity costs by 12%, Premier Ford told his Quebec counterpart that he was not interested in a deal that would provide power at one-third the cost of power from rebuilt reactors.

☼ New Canadian Association Builds Energy Efficiency’s Profile Efficiency measures create hundreds of thousands of jobs and “can contribute up to 40% of our energy needs in Canada” at a fraction of the cost of rebuilding nukes. Join the movement here.

☢ First “Small” Modular (Nuclear) Reactor (SMR) licence request goes to Canadian regulatorThe nuke boyz hope to resurrect they’re dying industry with “small modular reactors”. But they’re not small, not cheap, not tested, and have no solution for their radioactive waste. Here’s your chance to comment on the first application before the CNSC. The deadline for comments on the project description is September 15th.

☢ Order your FREE leaflets here calling on the Ford Government to Cut the Cuts and invest in water power from Quebec rather than rebuilding 10 nuclear reactors. Share them with your friends and neighbours.

☢ Order your free KI (anti-thyroid-cancer) pills here if you live within 50 km of an ON nuclear facility – that includes all of Toronto and beyond. Download your anti-thyroid cancer posters hereto post in your office, school, or local cafe.

☢ Power to the People with Minigrids – Webinar Wed. Sept. 11, 1:15 – 2:45 p.m. EST. Universal access to modern energy services is a prerequisite for poverty eradication and an enabler of human and economic development. This webinar will explore off-grid and minigrid energy solutions in remote villages.