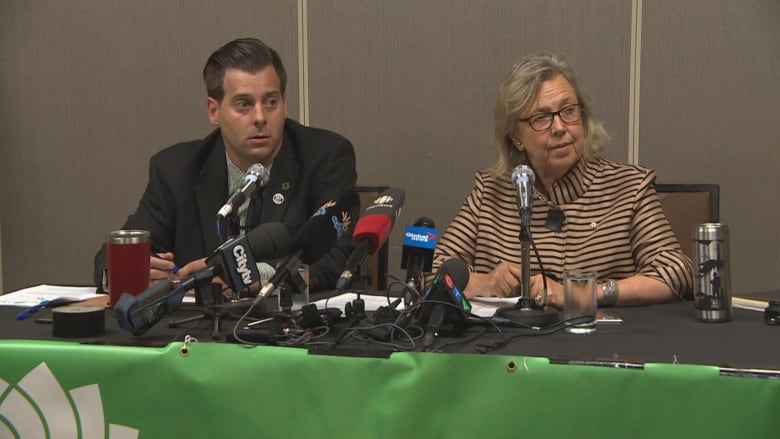 Leaders from the provincial and federal Green parties promised to bring in a guaranteed income program as part of their plan to reduce poverty.

Green Party of Manitoba Leader James Beddome, along with national party Leader Elizabeth May, unveiled their poverty reduction strategies at a downtown Winnipeg hotel on Friday.

“Investing in poverty reduction is one of the best public investments that we can make,” Beddome said.

The party cited a 2018 study by the Citizens for Public Justice that found as many as three in 10 Manitobans live in poverty.

The estimated cost of the Manitoba plan would be $1.58 billion. Although the plan would not eliminate poverty entirely, Beddome said it would lift 35,000 adults and 23,000 children out of poverty. People who remained below the poverty line would see their income increase by 21 per cent, he said.

May endorsed the Manitoba plan and said if the Green’s formed Canada’s government, they would convene a council of federal, provincial, local and Indigenous governments to come up with a national guaranteed liveable income plan.

“We can afford to eliminate poverty in Canada. I’d make the case that we can’t afford not to,” May said.

By investing in poverty reduction, governments would save money in other areas such as health, criminal justice, and “the apparatus and vast bureaucracy of band aid solutions for poverty that don’t ever, ever solve the problem,” May said. MORE