All of them feature military aircraft.

Notably, the CBC reports, “The U.S. Air Force F-35 demonstration team will visit Ottawa in September on the eve of this fall’s federal election — just as the competition to replace Canada’s aging CF-18s starts heating up.”

“The stealth fighter is one of four warplanes in the $19-billion contest, which was formally launched with a request for proposals by the Liberal government on July 23,” the article adds.

The $19 billion that is to be spent on 88 jet fighters that burn copious amounts of fuel each second they are in flight is another waste of billions of dollars on top of the $4.5 billion spent on purchasing the Trans Mountain tar sands pipeline (and the billions more it will take to expand that pipeline).

The Leap Manifesto calls for “cuts to military spending.”

The U.K.-based Campaign Against Arms Trade has an “arms to renewables” campaign that says money now spent on subsidizing the arms industry would be better spent on renewables and that in turn would be better for workers, the economy and world peace.

And Phyllis Bennis, a fellow at the Washington, D.C.-based Institute for Policy Studies, has argued that a Green New Deal needs to fight U.S. militarism. She cautions, “Wars and the military render impossible the aspirations contained in the Green New Deal.”

People have protested against air shows as a symbol of militarism for years.

In a 2016 opinion piece in the same newspaper, Craig Damian Smith commented, “in a city with a large population of refugee newcomers and people who have experienced the trauma of war it is insulting, invasive, and violent.”

“In Toronto, people affected by war are not an insignificant minority. This includes newcomers who aren’t refugees, Canadians, and family members struggling with inter-generational trauma,” he wrote.

It is my hope that Extinction Rebellion, Our Time, Fridays for Future and other climate justice groups will also see the need to challenge air shows as relics that serve to promote the militarism that accelerates climate breakdown and misdirects public funds away from the priority of building a green economy. MORE

What needs to be next for Canada’s Green New Deal is to determine what our true and just global responsibility is with regard to emissions cuts. The GND can’t fulfill it if we don’t know it.

I would like to share what I said at the Green New Deal meeting in Picton of July 23:

Getting the numbers right on our national emissions reductions.

The thing I like best about Canada’s Green New Deal is that it recognizes the primacy of saving a livable climate and incorporates this in its first principle. Canada’s Green New Deal also recognizes that saving a livable climate is first and foremost a matter of us in the so-called developed world making drastic cuts in our carbon emissions. There is a limit to the carbon dioxide emissions we can add to the atmosphere over the next decade without crashing the climate. And let’s not forget that within 30 years, that limit is zero.

I’m going to focus, as the GND does, on the next decade.

In order to save a livable climate it is crucial that all the projects and policies we develop going forward are consistent with staying below the 2030 global carbon emissions limit. Yet the Canadian Green New Deal movement does not have a coherent idea of what this is going to take.

This is in spite of having a clear, accessible guide: the IPCC Special Report Global Warming of 1.5 ºC. It details the catastrophic risks of going over 1.5 degrees above pre-industrial temperatures and the urgency of taking action to stay below that level. And it provides information about the global emissions reductions necessary to do this. Without going through all the math, by 2030 we need to reduce global anthropogenic carbon dioxide emissions by at least 51.8% from today’s level of 37.1 billion tonnes annually, to 17.9 billion tonnes annually1 or less.2

The first principle of Canada’s Green New Deal asserts that cutting our national emissions in half by 2030 meets the demands of this science.

Halving the Canadian carbon footprint by 2030, factoring in for population growth, would give us a per capita level of about 10 tonnes. That is not consistent with the global emissions level necessary to save a livable climate of 17.9 billion tonnes annually.

What is having a per capita carbon footprint of 10 tonnes consistent with? By 2030 it is projected that the global population is going to be 8.5 billion. You can do the math in your head: 8.5 billion times 10 is 85 billion tonnes annually, which would destroy the climate.

That’s the most important thing I have to say, but I’d like to also talk about how and why cutting national emissions in half over the next decade has gotten to be the dominant meme.  MORE

In 2018, Scotland, Iceland and New Zealand established the network of Wellbeing Economy Governments to challenge the acceptance of GDP as the ultimate measure of a country’s success.

In this visionary talk, First Minister of Scotland Nicola Sturgeon explains the far-reaching implications of a “well-being economy” — which places factors like equal pay, childcare, mental health and access to green space at its heart — and shows how this new focus could help build resolve to confront global challenges. (10:01) 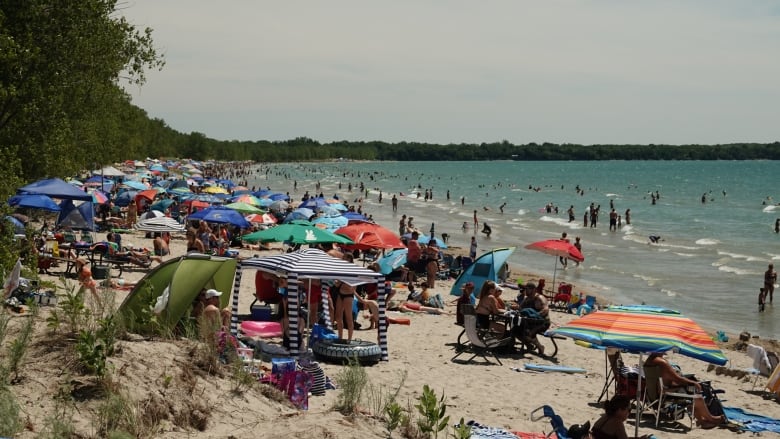 Visitors are being turned away from Sandbanks Provincial Park after the rising waters of Lake Ontario flooded one third of the park’s beaches this week.

The area, which is 220 kilometres east of Toronto in Prince Edward County, is known as a vacationing hotspot for Ontarians. It can usually accommodate around 2,200 vehicles, but nearly 200 parking spots were underwater.

But now, several trails have been closed due to flooding along with some of the beaches.

“It’s not unusual for us to have to close the site during the summer, especially during the holidays. But certainly the high water levels don’t help,” park superintendent Robin Reilly said.

Park employees have been forced to restrict the number of visitors to the area and were warning scores of tourists to stay away each day. 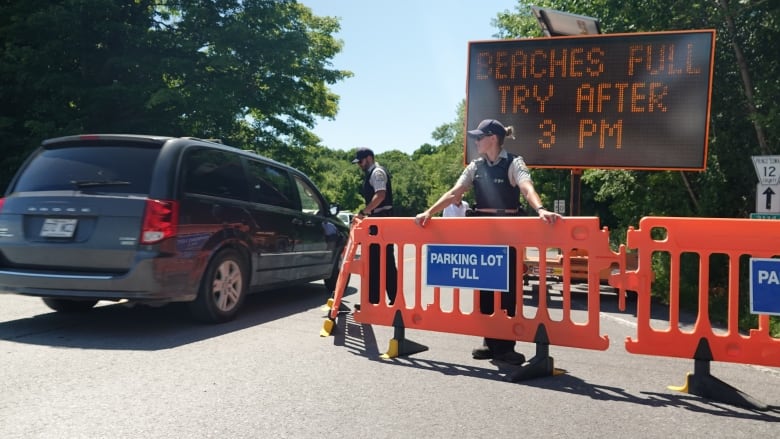 The flooding in Prince Edward County comes after officials in Toronto announced in June that the lake had hit 76.03 metres above sea level — the highest point in recorded history. MORE 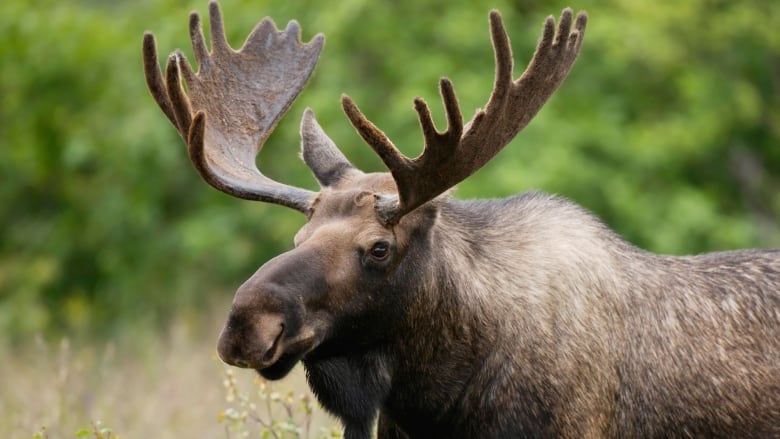 A Saskatchewan provincial court judge has ruled any status First Nations person can hunt in the province. (CBC)

A Regina provincial court judge has ruled that all First Nations people in Canada are allowed to hunt in Saskatchewan without a licence.

Before the ruling, the province only allowed hunters from treaties within Saskatchewan (Treaties 2, 4, 5, 6, 7, 8 and 10) to hunt for food on Crown land in the province. Any member of a First Nation outside of that area needed to have a licence.

The case stems from an incident in October 2018, where two men from the Six Nations First Nation in Ontario were charged with unlawful hunting in Moose Mountain Provincial Park.

Crown attorneys argued that the transfer agreement, which transferred jurisdiction of federal Crown land to the province, only dealt with treaty Indians that had a prior existing treaty right to hunt in the province.

However, the judge said that prior court decisions from other provinces sided with a broader view of the legislation. Any ambiguity around treaty wording is often resolved in favour of the First Nations, he said.

The Crown argued Saskatchewan was trying to preserve game for its own native community, and an expansive view would have hindered that.

“There is no evidence, even now, that we have a problem with a large number of native hunters entering to hunt within the province,” wrote Kovach. “It seems to me that this just wasn’t a big problem and certainly wasn’t something that one would allow to stand in the way of the deal.” MORE 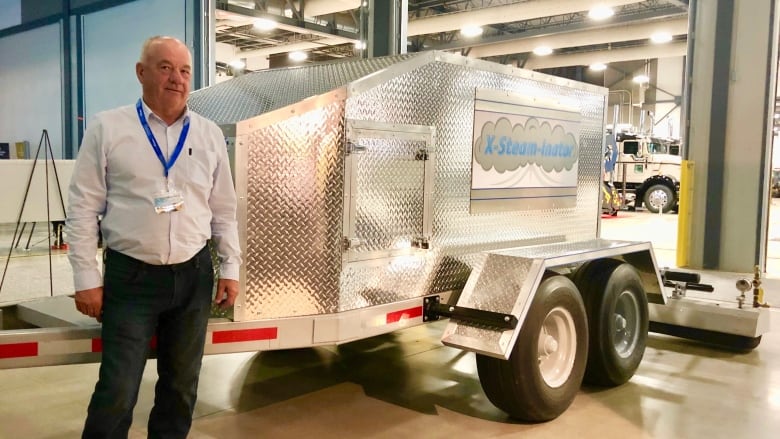 Organic farmer Ron Gleim stands with a prototype of his patented X-Steam-inator, designed to control weeds with steam, not herbicide. (X-Steam-inator)

Fed up with the weeds on his organic operation, third-generation farmer Ron Gleim went to work on a better way to battle the problem plants.

But what started with testing scalding water on the vexing vegetation around his yard led to something bigger: the X-Steam-inator.

The patented machine — a prototype of which looks a bit like a Zamboni — is designed to decimate weeds with a spray of hot steam, not herbicides.

“Four years ago we started using hot water and then over the next three years we kind of started to develop the steam,” said Gleim, who farms near the village of Chaplin, Sask.

“About a year and a half ago, I put a patent on it and now here we are.” 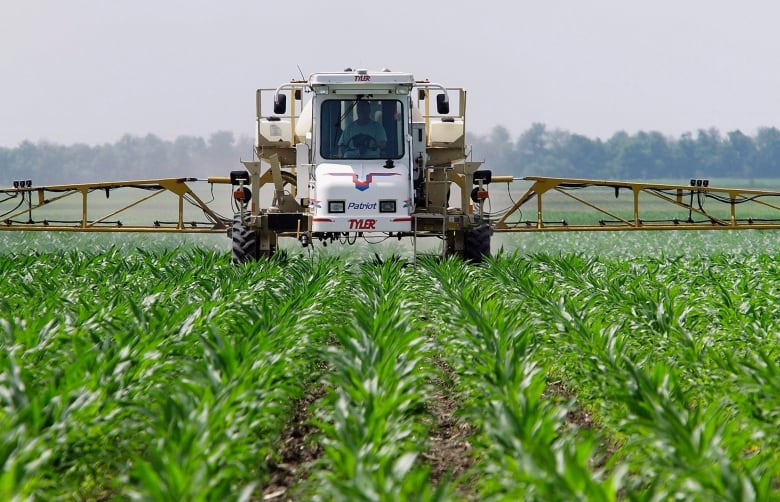 It may be too early to say whether the X-Steam-inator — unveiled recently at farm shows in Saskatchewan — is the start of a new chapter in the age-old battle between farmers and weeds.

But it certainly won’t hurt. MORE