The UN climate science panel has released its summary of the evidence around the tougher climate goal demanded by vulnerable countries. We break it down

For some people difference from 1.5C and 2C could be their country. Photo by: Unknown

The UN published a summary on the science of 1.5C global warming on Monday. It’s a big deal.

This is the first time the Intergovernmental Panel on Climate Change (IPCC) has gathered evidence on the tougher target demanded by countries on the front line of climate impacts.

It validates their concerns, showing that the difference between 1.5C and 2C — the upper limit governments committed to in the Paris Agreement — is critical to millions of people’s homes, jobs and lives.

As to whether it is feasible to halt the temperature rise at 1.5C above pre-industrial levels, the report has no easy answers. What it does is elucidate the options.

The result of writing by committee is a somewhat dense and technical document. Here is our breakdown of the key messages and omissions, and their political significance.

We have followed the structure of the IPCC report, in four sections.

Ontarians should be concerned by the vast changes that are being made to provincial environmental legislation as they will have serious consequences on the natural spaces we cherish.

In an overarching attempt to “modernize” Ontario’s environmental plan, Premier Doug Ford and his government have made moves to pave the way for development across the province by reducing so-called “red tape.” The government is undercutting the Endangered Species Act and the Environmental Assessment Act, and limiting community engagement in northern Ontario planning decisions by repealing the Far North Act.

Despite the staggering rollbacks, these changes have received little attention in the mainstream media. Under the umbrella of these “modernization” efforts, the common thread of reducing red tape for business and development ventures is apparent in the Ford government’s proposed changes. MORE The Alberta premier has launched a public inquiry to expose the foreign funding behind environmental groups opposing his efforts to increase production of Alberta’s carbon-heavy oil.

But Kenney’s claim to be shielding Albertans from foreign “special interests” is absurdly selective; he’s planning to shine the light on a small slice of foreign influence, while keeping the spotlight away from the massive foreign influence exerted by Big Oil.

If there’s ever been a foreign player wielding influence in Canada, it’s been Big Oil, which has exercised a virtual stranglehold over Alberta politics during the last few decades. But that story — and Kenney’s complicity in it — is one the premier is determined to keep under wraps.

“Big Oil was the original special interest meddling in Canadian affairs,” says Donald Gutstein, an adjunct professor at Simon Fraser University and author of The Big Stall: How Big Oil and the Think Tanks are Blocking Action on Climate Change. “From the very beginning, Canada’s oil and the tarsands were an American affair, financed by American capital to provide petroleum for the American market. Canadians and the environment be damned. Now Canadians, environmentalists and First Nations are saying ‘enough.’”

Let’s be clear: enormous amounts of money are being spent in the global battle to lobby governments and sway public opinion on climate change in the roughly dozen years we have left — according to the UN’s panel of climate experts — before it’s too late to stop the world’s descent into climate hell.

But the vast majority of this money — by a margin of about 10 to 1 — is spent by the fossil fuel industry, according to research by Drexel University’s Robert Brulle.

What is truly absurd is the notion that the relatively small amounts of foreign money coming from the Rockefeller and Tides foundations are any match for the huge resources unleashed by corporations and wealthy individuals to defend their investments in fossil fuels.

Some of the most powerful U.S. oil interests — including Koch Industries— have major holdings in Alberta, as the Star’s Olivia Ward and the Washington Post have documented. MORE

Six in ten Canadians want the government to take action to address climate change, even if the economy suffers, new results from a Mainstreet poll for iPolitics suggests.

The fourth release of results from the pollster’s phone survey of 2,651 Canadians — conducted between June 27 and July 2 — shows that 61 per cent of respondents strongly or somewhat agreed with the statement that it’s more important for the government to solve the issue of climate change even if that means that the economy suffers. That number was even higher in Quebec (76.8 per cent), Atlantic Canada (67.3) and B.C. (62), and among women (66.1), 18-35 year olds (64.4) and those aged 65 or older (64).

Only in Alberta did more respondents disagree (59 per cent) with the statement than agree (36.5). MORE 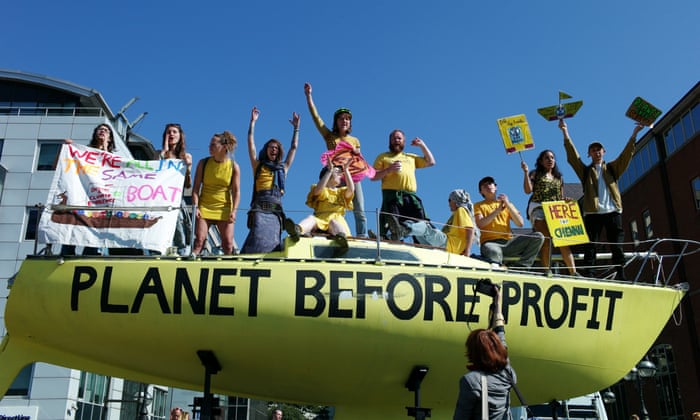 Switching just some of the huge subsidies supporting fossil fuels to renewables would unleash a runaway clean energy revolution, according to a new report, significantly cutting the carbon emissions that are driving the climate crisis.

Coal, oil and gas get more than $370bn (£305bn) a year in support, compared with $100bn for renewables, the International Institute for Sustainable Development (IISD) report found. Just 10-30% of the fossil fuel subsidies would pay for a global transition to clean energy, the IISD said.

Ending fossil fuel subsidies has long been seen as vital to tackling the climate emergency, with the G20 nations pledging in 2009 to phase them out, but progress has been limited. In May, the UN secretary general, António Guterres, attacked subsidies, saying: “What we are doing is using taxpayers’ money – which means our money – to boost hurricanes, to spread droughts, to melt glaciers, to bleach corals. In one word: to destroy the world.”

The new analysis shows how redirecting some of the fossil fuel subsidies could decisively tip the balance in favour of green energy, making it the cheapest electricity available and instigating a rapid global rollout. 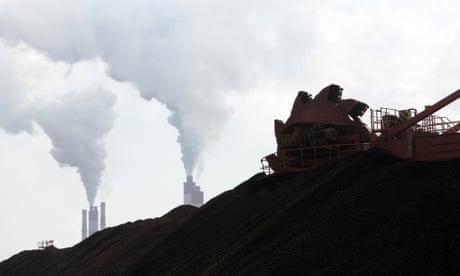 “Almost everywhere, renewables are so close to being competitive that [a 10-30% subsidy swap] tips the balance, and turns them from a technology that is slowly growing to one that is instantly the most viable and can replace really large amounts of generation,” said Richard Bridle of the IISD. “It goes from being marginal to an absolute no-brainer.”

The transition from polluting fossil fuels to clean energy is already under way. Annual investment in renewables has been greater than that in fossil fuel electricity generation since 2008 and new renewable capacity has exceeded fossil fuel power each year since 2014.

But progress is slow compared with the urgency required, said Bridle. “There is no question that renewables can power the energy system,” he said. “The question now is can we transition quickly enough away from fuels like coal, and subsidy reform is a very obvious step towards that.” Very few ways of cutting emissions actually save governments money, he said. MORE

Reforming Subsidies Could Pay for a Clean Energy Revolution: Report

Prime Minister Justin Trudeau’s government is buying a pipeline that will likely make it harder for Canada to meet its commitments under the Paris Agreement.

Nobody in the mainstream media ever asks Prime Minister Justin Trudeau or Finance Minister Bill Morneau if they’re perpetrating an unprecedented crime on future generations.

Even after the Liberal government announced its intention to pay a Texas oil company $4.5 billion for its Trans Mountain Pipeline Expansion project, coverage focused on the financial aspects of the deal, not its moral component.

So these are the typical issues addressed:

How much would Canadian taxpayers pay to complete construction?

Are there really buyers in Asia for the 890,000 barrels per day of expensively produced, energy-intensive diluted bitumen that will arrive in Burnaby from Alberta?

What does this mean for the people who work on the project?

How will Indigenous people react?

The most uncomfortable questions about greenhouse gases are almost never broached.

But what if, in fact, Trudeau, Morneau, and politicians like them around the world are committing a crime of immense proportions on the young and those yet to be born?

What if this can be demonstrated through the relationship between additional greenhouse gas emissions and more powerful and deadly hurricanes, longer and more devastating forest fire seasons, and unimaginable flooding of seaside and riverside cities around the world?

Would the mainstream media become an accessory to the crime through its acquiescence?

These are some of the issues raised in an extraordinary new book, Unprecedented Crime: Climate Science Denial and Game Changers for Survival, by B.C. authors Peter D. Carter and Elizabeth Woodworth.

What’s more, they maintain that it would be criminally negligent to do otherwise. And they point out that information about the threat has been publicly available for nearly four decades. MORE

The economy-versus-environment debate is wrong-headed in elevating a changeable human construct to the same level or above the natural systems on which our health and well-being depend. And in many cases, it would be more accurate to characterize it as “environment versus corporate interests”. Although those interests often align with economic benefits and jobs, sometimes they just mean bigger profits for company CEOs and shareholders at the expense of the common good.

When “economy” is regarded as more than just profit-taking, it can be compatible with environmental protection. With caribou conservation, there can be room for both.

Caribou-protection measures are based on research and evidence, and even so, the 65 percent disturbance threshold only gives herds a 60 percent chance of persistence. Boreal caribou are threatened with extinction from coast to coast to coast, their populations continuing to decline since the federal Species at Risk Act was introduced in 2002.

Caribou are an “umbrella’ species. When populations are healthy, so are many other animal and plant species and the forests they share. Healthy forests provide services such as filtering water and sequestering carbon, which means protecting caribou and their habitat can safeguard water supplies and help reduce climate-altering carbon buildup in the atmosphere.

Room for Both, a new study by the David Suzuki Foundation, Alberta Wilderness Association, and Ontario Nature, demonstrates that caribou conservation and industrial-resource activity need not be mutually exclusive. It examines ways for caribou and industrial activity to coexist, and it concludes that effective habitat restoration can create economic opportunities and help advance reconciliation with Indigenous Peoples. The report synthesizes research from three studies on boreal caribou in British Columbia, Alberta, and Ontario. It calls for more science-based discourse, better analytic models that take into account caribou conservation values to optimize “least cost” solutions, and recognition of the potential employment value of forest restoration. Past decisions often focused solely on the economic benefits of timber and oil and gas extraction. MORE