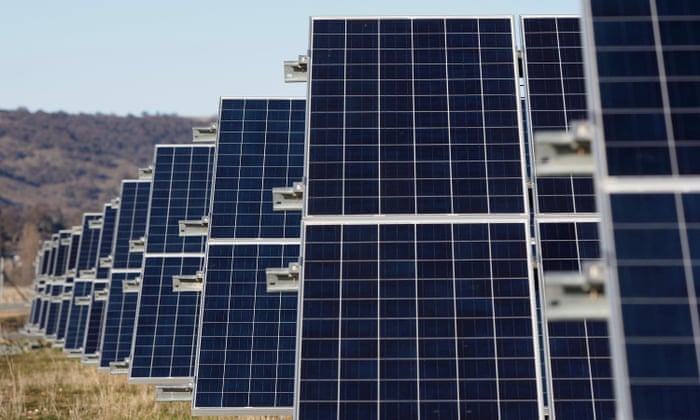 A solar farm in Canberra. The clean electricity being sent into Australian homes and businesses could rise 36% this year. Photograph: Lisa Maree Williams/Getty Images

Nearly 3.5 gigawatts of large-scale clean energy projects were built in 2018. In capacity terms, this is more than twice the scale of Hazelwood, the giant Victorian brown coal plant that shut abruptly a couple of years ago, and it more than tripled the previous record for renewable energy installed in one year, set in 2017.

In generation terms, the amount of clean electricity being sent into Australian homes and businesses is expected to increase 36% this year, and should grow another 25% next year.

The Clean Energy Regulator, which released the report, says this makes Australia the global leader in per capita renewable energy deployment.

He says the new renewable projects in NSW should comfortably fill the gap that will arise when the Liddell coal-fired plant shuts in 2022, a planned event deemed so potentially disastrous a year ago that the Coalition under Malcolm Turnbull attempted to put pressure on the plant’s owner, AGL, into reversing its decision.

The surge in clean generation is creating conditions that would have been unimaginable not so long ago. For a brief period last weekend, so much energy was being captured from the wind and sun, and demand for electricity use dropped so low, that the spot price for wholesale electricity simultaneously fell to $0 in each of the five eastern states connected through the national grid. At that moment, 44% of the electricity being used across the market was from a renewable source, compared with 26% across the week. MORE