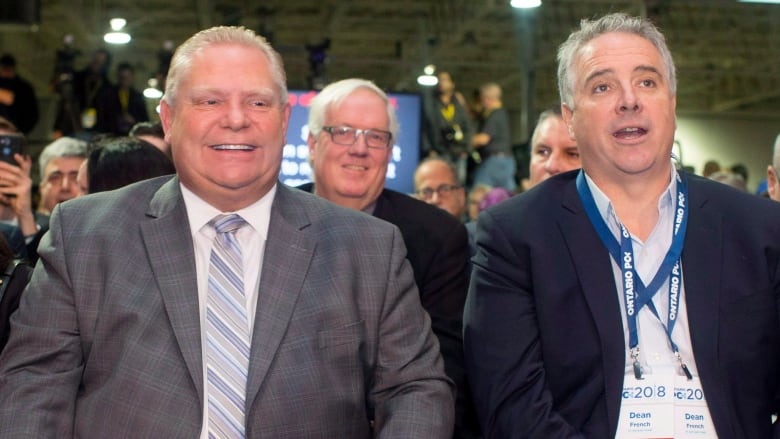 Premier Doug Ford brushed off questions Monday about a controversy around government appointees with personal ties to his former chief of staff, suggesting the public doesn’t care about it.

Dean French abruptly left his job as Ford’s top adviser more than two weeks ago when it first emerged that people given lucrative foreign postings were connected to him.

Ford revoked those appointments, but as news of other government appointments having connections to French continued to emerge, the premier was silent on the issue.

His first comments came Monday during a joint news conference with other premiers in Calgary, but he quickly pivoted to other topics.

‘We’re not here to talk about Dean French’

“I know the media, you want to get into the weeds,” he said. “Do you really think when I walk down the street in Alberta, people worry about Dean French? … You know what they worry about? They worry about a job.”

Ford said he had already addressed the issue.

Ford revoked the agents-general appointments in London and New York City of Taylor Shields and Tyler Albrecht shortly after Shields was reported to be related to French and it emerged that Albrecht played lacrosse with French’s son.

Four days later, Katherine Pal resigned from the Public Accountants Council after the NDP noted that she is a niece of French’s wife.

At that point, Ford’s staff say he ordered a review of pending appointments, though they won’t say who is conducting the review, how many appointments are pending, what criteria is being used, and if any revoked appointments will be announced.

‘A lack of respect’

The opposition parties want such a review to be conducted externally, and not by the same office that originally signed off on the appointments in question.

New Democrat Taras Natyshak said Ford has been hiding instead of taking responsibility for a patronage scandal.

“Today he finally popped his head up only to pass the buck in Cowtown,” Natyshak said in a statement.  MORE