This story is part of a CBC News series entitled In Our Backyard, which looks at the effects climate change is having in Canada, from extreme weather events to how it’s reshaping our economy. 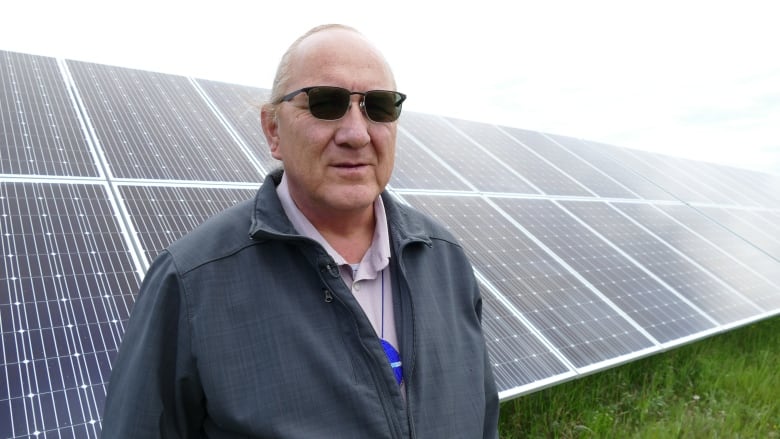 Fisher River chief David Crate hopes to have most of the community using its own generated energy within 20 years. (Angela Johnston/CBC)

Fisher River Cree Nation will soon be home to the biggest solar farm in Manitoba — a one megawatt facility that will be hooked up to the province’s power grid — and its backers are hoping that the project will pique the interest of other First Nations.

“The focus of this particular project is revenue generation for the community,” says David Crate, the chief of Fisher River.

“The long-term planning is to … try and have as much of our community powered up on solar, and possibly other green energy initiatives.”

Fisher River’s solar farm, located about 200 kilometres north of Winnipeg, has almost 3,000 panels. It’s what Manitoba Hydro calls “the first utility-scale solar project” in the province, and it spans seven acres and was built entirely by Indigenous employees.

The solar array is a partnership with W Dusk Energy Group Inc., an Indigenous-owned firm that specializes in solar, wind and renewable energy systems. The company helped design and manage the project.

According to Crate, the solar farm got the green light after an agreement was finalized a couple of years ago with Manitoba Hydro to have Fisher River sell the energy generated by the array to the Crown corporation’s grid.

Check out drone footage of Fisher River Cree Nation’s solar array, which will generate a megawatt of electricity when it’s operational in July. 0:40

Renewable sources of energy are something that the owner of W Dusk Energy, David Isaac, believes more First Nations should be working toward.

“The future is upon us,” Isaac says. “I think we all have to collectively embrace it.” MORE