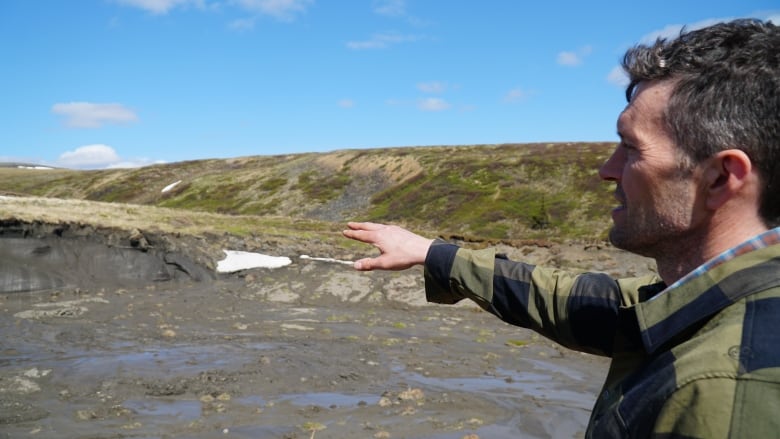 Permafrost scientist Steve Kokelj points to an area off the Dempster Highway where the northern permafrost is thawing. (CBC)

This story is part of a CBC News series entitled In Our Backyard, which looks at the effects climate change is having in Canada, from extreme weather events to how it’s reshaping our economy.

In one of the coldest places in Canada, Steve Kokelj is searching for Arctic thaw. He’s driving the great Dempster Highway, 747 kilometres of gravel linking southern Canada to the Arctic.

“The large permafrost disturbances that we’re seeing now have really developed in the last one to two decades,” he says.

Kokelj is a permafrost scientist for the territorial government, and his job is to survey the alarming changes to the layers of ice and rock which underpin the North.

“Think of permafrost as sort of the glue that holds the northern landscape together.”

But as the Arctic warms three times as fast as anywhere else in the world, that permafrost — made up of leftover ice from the last glaciation, frozen for thousands of years — is degrading.

That’s glaringly obvious as he pulls over to point out a huge hole carved out of the Dempster highway embankment. Elevated moisture and warmth have caused the side of the road to collapse.

As rising temperatures thaw the permafrost, the terrain in the North is being changed by landslides and erosion, like this stretch of the embankment along the Dempster Highway. (Mia Sheldon/CBC)

“As the ice-rich permafrost thaws, the ground settles proportional to how much ice there is in the ground,” Kokelj says.

In this case, that’s a lot.

Further along the highway, another road slump was dubbed “the million dollar hole” because so much gravel had to be poured in to shore it up.

The highway is drivable, but climate-related maintenance costs on the Dempster have more than tripled over a decade, to $5.1 million in 2016.

“It really highlights the need to start thinking innovatively about the solutions, because these types of phenomena are going to become more and more commonplace,” Kokelj says. MORE