There’s a lot of confusion about climate change out there, especially when it comes to finding viable solutions. How can we determine what solutions make the most sense, and where to focus our efforts? It turns out that starting with these three little graphs helps a lot.

he confusion about climate change gets even messier when it comes to solutions. The discussions usually don’t start with facts or basic science; instead we can hear from numerous “experts” who want to tell you how they will solve climate change — usually with their favorite pet theory or business idea. Often with little data or scientific understanding to back it up.

Before debating the merits of different climate solutions, it’s best to start with the basic science, and learn a little about how greenhouse gases actually work. Then we can have more informed debates and discussions about which solutions to climate change are the most viable.

Here’s where a couple of simple graphs may help.

First, here’s a chart of the anthropogenic (a fancy word which means “human generated”) greenhouse gas emissions into the atmosphere. 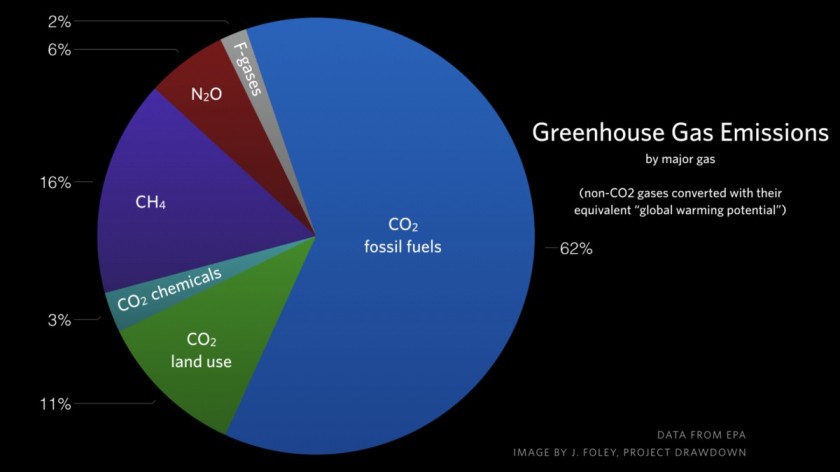 This graphs shows us a few basic things.

Each gas behaves a little differently in the atmosphere, and we need to take that into account. For example, some gases trap heat much more effectively than others, because their molecular structure absorbs infrared radiation better, and they each last a different amount of time in the atmosphere. So to compare them in a consistent, “apples to apples” way, we often convert them into equivalent units by averaging their “global warming potential” over 100 years. (This is a standard tool to compare different greenhouse gases and their impact on climate change. But it does bury a few important points. For example, methane is far more powerful at trapping heat than carbon dioxide, but it doesn’t last in the atmosphere very long. So, in the short term, say 10–30 years, methane is extremely important to climate change. But in the longer term, like a century or two, it’s much less so.)

Of our greenhouse gas emissions, carbon dioxide gets most of the attention, and for good reason. It represents about 76% of our greenhouse gas emissions each year. And the lion’s share of it (about 62% of total emissions) comes from burning fossil fuels, including our use of oil, coal, and natural gas. That’s why a lot of the focus on climate change solutions is centered on replacing fossil fuels — it causes about 62% of the problem.

But a lot of carbon dioxide, and other greenhouse gases, aren’t generated from fossil fuel combustion, and we need to look at those too.

In fact, it’s a big mistake to equate greenhouse gas emissions with burning fossil fuels alone; you’d be missing about 38% of the emissions, and 38% of the opportunities to address climate change.

For example, about eleven percent of our greenhouse gas emissions stem from carbon dioxide released from land use, especially deforestation. Remember, burning trees, which are also largely made up of carbon, is like burning coal. They both release CO2.

And some carbon dioxide is released from chemical processing and curing cement. Those are significant sources too.

Then we have methane (CH4), which can be released from leaks from fracking and natural gas pipelines, landfills, and biomass burning. Another major source of methane comes from agriculture, especially from rice fields and cattle. (Funny fact: cattle mainly burp methane, not fart it.)

Finally, we have fluorinated gases (f-gases) such as hydrofluorocarbons (HFCs), chlorofluorocarbons (CFCs), and sulfur hexafluoride (SF6). These chemicals are typically used as refrigerants or in industrial processes.

There are other minor greenhouse gases, and something called “black carbon”, that we humans emit into the atmosphere as well, but for the sake of simplicity, this is a good starting point.

The bottom line is that the greenhouse gases that warm our planet include more than CO2, and come from more than just burning fossil fuels. We need to widen our perspective to understand, and address, climate change. MORE