Fresh from a stunning electoral victory in October 2015, Prime Minister Justin Trudeau went to the historic international climate talks in Paris to proclaim that, “Canada is back.”1 Trudeau promised to leap frog Canada from environment laggard under Conservative Prime Minister Stephen Harper to a global climate leader. While most rich countries at the Paris climate negotiations aimed to limit global warming to a 2.0°C rise above pre-industrial levels, Canada joined low-lying island states and others in the Global South to champion a stricter 1.5°C global limit.

What a difference three years make. In the summer of 2018, Trudeau’s government invoked the “national interest” to justify buying the Trans Mountain oil pipeline system – including a 65-year-old pipeline – from Texas-based Kinder Morgan. Ottawa’s aim was to expand the pipeline to send major volumes of Alberta bitumen to B.C.’s coastal shores for export. Trudeau’s volte-face left observers scratching their heads. Why would a government so committed to urgent climate action potentially enable the growth of Alberta’s oil sands, Canada’s greatest and fastest growing source of carbon pollution?2 The purchase raised other important questions including: Should Canadians care that Ottawa bought a financially dubious oil pipeline? What do Canadians get for this extraordinary purchase? How much will the purchase ultimately cost taxpayers?

Ottawa bought the pipeline while the United States, Mexico and Canada were negotiating a replacement deal for the North American Free Trade Agreement (NAFTA). The United States-Mexico-Canada Agreement (USMCA) includes a chapter on state-owned enterprises (which Canadians used to call Crown Corporations), an energy side letter, and exemptions for the Trans Mountain Corporation, the pipeline company now owned by the government.3 If ratified, the USMCA will likely continue into the 2030s and perhaps beyond. This is the same short time span during which the Intergovernmental Panel on Climate Change (IPCC) says countries must rapidly change all systems to avert climate catastrophe.

This report examines the implications of the USMCA’s provisions on pipelines, specifically the Trans Mountain expansion, and whether the USMCA’s energy measures enhance or reduce Canada’s ability to meet its climate targets. This report argues that the state-owned enterprises exemption and the energy side letter simultaneously reinforce a business-as-usual approach and protect the extraordinary measures (and extreme cost) the Canadian government has taken to continue exporting bitumen.

This report has three sections. The first reviews the Canadian government’s purchase of the Trans Mountain Corporation (TMC). The second section outlines why the purchase was a bad investment, and how the USMCA will continue to enable the government’s poor decision-making about the pipeline. The final section focuses on the implications of the USMCA’s energy goal of integrating Canadian oil and natural gas into the U.S. market. 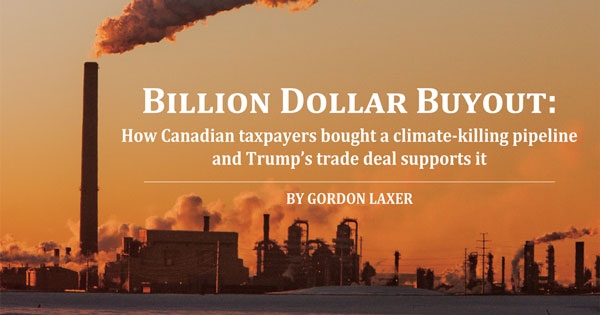 Trudeau should cut his losses on the Trans Mountain pipeline