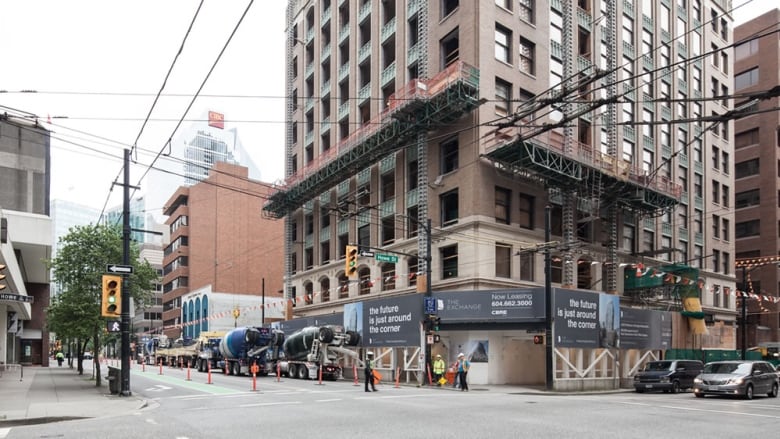 Vancouver’s The Exchange hotel was formerly the Vancouver Stock Exchange. It’s now waiting on its LEED plantinum certification. (The Exchange)

The Canada Green Building Conference is taking place in Vancouver this week, and a major portion of the program will be pushing the need to retrofit older buildings to reduce their carbon footprint.

Thomas Mueller, president and CEO of the Canada Green Building Council, says buildings contribute about 30 per cent of the country’s greenhouse gas emissions — mostly because of their heating, lighting, and cooling systems.

Cities like Vancouver have taken the lead in constructing low-emission buildings. But Mueller says new buildings alone won’t be enough for Canada to reach its targets to reduce greenhouse gases.

“We can’t build our way out of it,” Mueller said in a phone interview ahead of the conference.

Green development advocates like Mueller say the building sector may be one of the biggest contributors of greenhouse gas emissions in the country, but it also has “tremendous opportunity” to affect change.

“It’s the only sector in our economy where we actually have a financial benefit by doing the right thing,” he said.

There are about 250,000 large buildings in Canada, Mueller says.

Canadian homes and businesses could have much smaller carbon footprint by 2050, says joint IEA-NEB report

One thought on “New energy efficient buildings aren’t enough, experts say — we have to retrofit the old ones, too”