We will never solve a problem if we do not define the problem accurately . This statement has a few glaring misuse of statistics . Let us not assume that per capita energy consumption is expended equally per capita . This speaker did not explain the source or construction of the per capita statistic . She leaves us to assume that we Canadians personally are doing something to produce  8 times more co2  than persons of other countries. 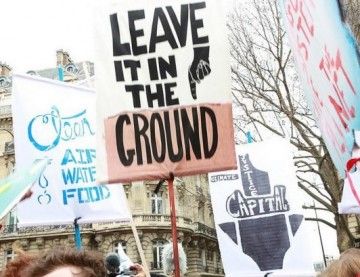 She does not explain that we – OUR GOVERNMENT and the international OIL COMPANIES  are ripping up the TAR SANDS irresponsibly ( which is part of that statistic ) and not only polluting our air but also polluting the river systems that drain into the Arctic Ocean.

This should NOT be blamed upon each Canadian .

Those of us who are aware of it have been complaining of this wreckage for years but our irresponsible government not only allows it to go on but says it must go on to supply JOBS.

The whole oil industry in Alberta is run by the oil cartels for their own benefit at the expense of Canada AND  the people of Alberta.
Under Peter Lougheed Alberta made a 40 % and had saved 11 billion for the Heritage Fund. Klein gave it all away . ( Do you think he did this on his own without the help of the oil companies ??? )  There was also savings to cap abandoned wells . Now there is no money collected from the oil companies to do the cleanup and we THE PEOPLE are stuck with $ billions in old wells abounded by the oil companies because the gov. did not require them to pay up front.
Even if we each cut our emissions personally we would not meet the climate  goals unless the industrial wasteful practises of which the oil sands is only one , were to be curtailed .
Conclusion  : If there is an environmental statement to be made please know your facts and understand how the statistics you use are composed .
The environment is an important issue but we must understand that the corporate processes are doing the greatest harm . This is a topic which needs some careful explanation . Largely it is not the people’s fault . Many of the bad habits of the people are made necessary by the decisions of the corporate sector .  Example, most of us drive cars that run on fossil fuels. We do this because the corporate crooks want to sell us the carbon . We could have had  E V ’s years ago but they prevented it from happening . We also could have had much better public transportation but the car producers took action to prevent that also from happening so that they could sell more cars. And lastly the plastics industry still wants to make as much plastic as they can even though the world is drowning in the excess .

We have biodegradable material . We could have been using it years ago but we thought we were recycling it – We weren’t . Now we see the  mess we are in when plastics some companies shipped abroad mislabelled are being returned 10 to 15 years later as the garbage it is and was  –  AND who is paying for it ? –  THE PUBLIC PURSE –  THE PEOPLE .